20.5% graphite for BlackEarth in Madagascar 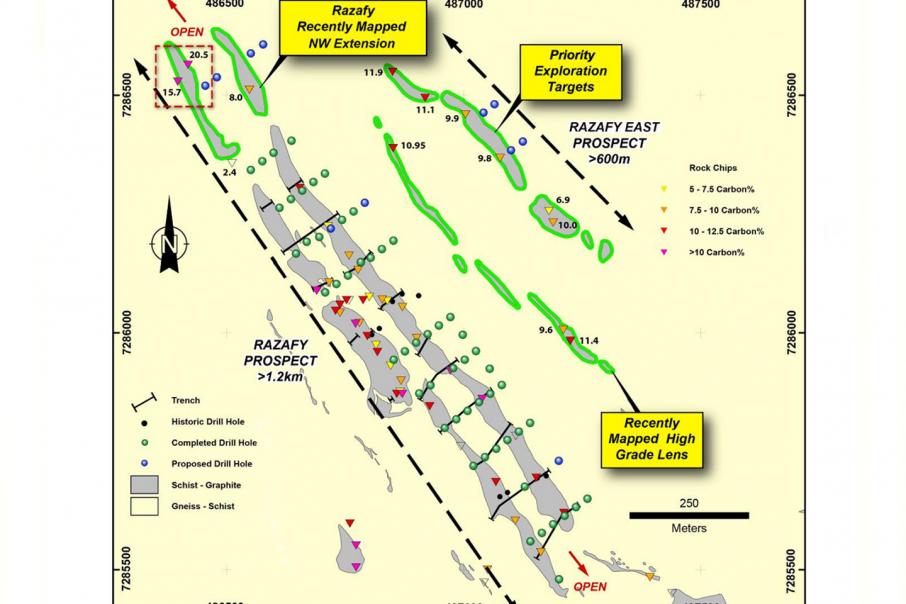 Graphite hopeful BlackEarth Minerals is expanding its drill program at its 100%-owned Maniry graphite project in Madagascar after rock chip samples of up to 20.5% total graphitic carbon indicated that the mineralisation may extend considerably to the northeast.

Further rock chip samples of 15.7% TGC and 11.4% TGC have extended the overall length of the Razafy system to more than 1.2km.

Results from the expanded drilling program will be included in the resource estimate for Razafy, which is still on track for delivery in late July.

Additionally, rock chip samples of 11.9% TGC and 11.1% TGC and subsequent mapping at the Razafy East prospect have identified a new lens over 600m long and 25m wide that is now considered a further priority target for immediate exploration drilling.

Further drilling will be used to form a resource estimation at Razafy East to be added to the company’s resource inventory over the coming months.

Interestingly, results from its ongoing – and now expanded – drilling program have indicated that previous surface sampling appeared to be an accurate guide to the expected TGC grades below surface.

Managing Director Tom Revy said: “The extension to Razafy and mapping of Razafy East confirms BEM’s assessment on the prospectivity as the Razafy prospect remains open along strike and at depth with clear repetition trending to the east.

“The discovery of the new lenses at Razafy East confirms our view of the significant upside that exists in the Razafy Prospect within the Maniry Graphite Project. It confirms our theory of the highly prospective nature of this system.”

The maiden resource estimate will underpin a scoping study which BlackEarth aims to complete before the end of the calendar year.

The company is looking to fast track the Razafy prospect and monetise the asset as soon as it can, in a jurisdiction that has been much more receptive to the establishment of a sustainable mineral and resources industry in the past few years.

With further assay results expected soon, a resource estimate coming in late July and definition drilling to be carried out at the Haja prospect just south of Razafy, there looks to be lots to come from this recently listed pure graphite player.