St George Mining has confirmed that mineralisation at its Investigators nickel-copper prospect near Leonora in W.A becomes thicker in the down dip direction after intersecting 8.4m @ 2% nickel, 0.96% copper, 0.06% cobalt and 2.59g/t total PGE from 199m. Further step-out drilling is underway while down-hole electromagnetic surveys are being run near one of the very strong conductors. 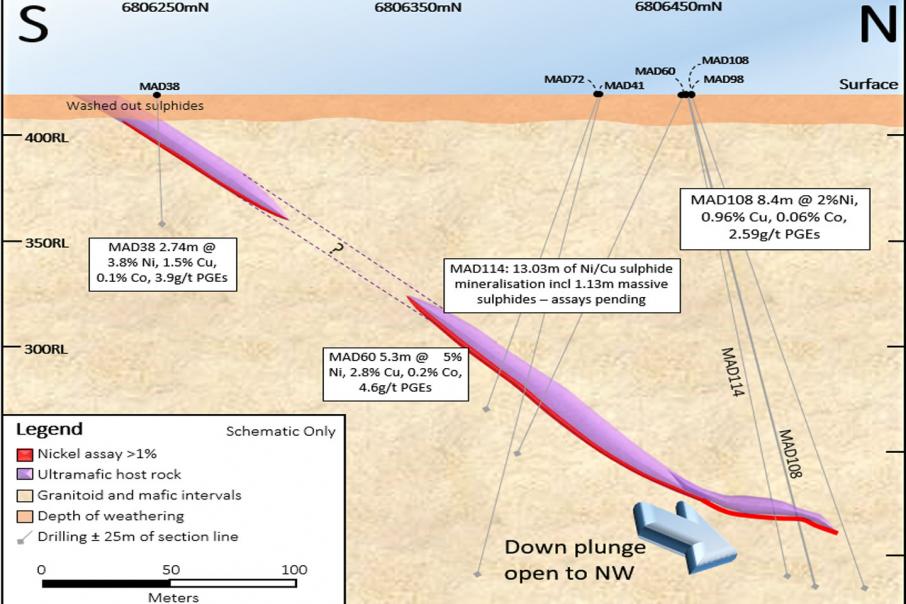 ASX listed St George Mining continues to refine its picture of the Investigators nickel-copper prospect near Leonora in W.A. with drilling confirming that the mineralisation becomes thicker in the down dip direction.

This extends the down plunge strike of high-grade mineralisation on the MAD60 section to 320m.

Earlier this month, drill hole MAD114 confirmed the 320m plunge of mineralisation on the MAD60 section towards the north after intersecting over 13m of mixed massive and disseminated nickel-copper sulphides from 193.3m down-hole. Assays are pending for this hole.

Further step-out drilling is underway on the MAD60 section.

St George Executive Chairman John Prineas said: “Our geological model of Investigators indicates that the mineralised ultramafic unit dips to the north at an angle of 30 degrees with potential for additional and thicker mineralisation in the down dip direction.”

“This has been confirmed by the results from MAD108, which was a 110m step-out from the high-grade intersection of MAD60. With high-grade mineralisation starting from just 25 to 30 metres from surface, this is a significant increase to the footprint of mineralisation at Investigators.”

St George also appears to have received a sniff of the very strong conductor MAD111: X1 that is located 230m east of the MAD60 section.

The first hole drilled to test this conductor is believed to have intersected the periphery of the conductor while the second hole that was drilled 10m up-dip, intersected sulphide mineralisation.

The company will complete down-hole electromagnetic surveys in these holes to assist in identifying the conductive material around them. Further drilling will be planned once results of the surveys are returned.

At the Investigators East prospect, St George has intersected further massive nickel-copper sulphides and run a down-hole survey to assist in the planning of further drilling.

These prospects are located within the broader Mt Alexander project that is located about 120km south-southwest of the highly endowed Agnew-Wiluna belt that hosts numerous world-class nickel deposits.

St George manages the project, with heavyweight nickel producer Western Areas retaining a 25% non-contributing interest in the project tenement up until a decision to mine.