Theatrical influences have become a point of difference for 1907 Restaurant. 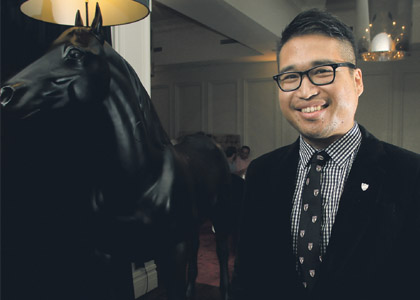 Theatrical influences have become a point of difference for 1907 Restaurant.

A LIFE-SIZE model black stallion makes for an unusual welcome as guests enter the foyer of 1907 Restaurant in Queen Street, with heavy dark curtains adding to the mystique and theatrical atmosphere in the dimly lit venue.

The scene is indicative of what restaurant manager Harold Faizal describes as “fine-dining with a twist”; he’s done away with any of the ‘detached coolness’ often associated with wait staff at fine-dining restaurants and replaced them with ‘theatrical service providers’.

“We’re trying to focus on a more theatrical and interactive dining experience,” Mr Faizal says. “I guess we’re moving along more with the modern times.”

The 1907 Restaurant and basement cocktail bar became part of Perth’s fine dining fabric almost five years ago when the century-old building was refurbished.

However the business focus has shifted in the past couple of years amid increased competition.

Elements of the food preparation process have moved from the kitchen to in front of the customer, which Mr Faizal says creates a sense of theatre and customer involvement, while head chef Alan Desouza has experimented with what Mr Faizal describes as ‘deconstructed’ food concepts.

“We don’t just want to have all the plating and everything done in the kitchen and taken to the table saying ‘this is your crab salad’, we want to bring out the dressing and finish it off at the table,” Mr Faizal told Gusto.

“Or we’ll have a cup of tea that appears to be hot, because it’s got mist coming off it, but actually it’s freezing; and it’s not just a tea, it’s a lemonade as well.”

They are among the characteristics incorporated from industry trends developing on the east coast, discovered during the business’s annual scoping trip.

“Every year we learn something different that we want to bring back to Perth,” Mr Faizal says.

“In the CBD I guess we feel sole responsibility to really enhance the city, and at the end of the day that’s really why we started the restaurant - to bring in a really innovative product.”

Increasing competition from the city’s high-end restaurants has been a significant driver for the integration of the theatrical service and experimental menus at 1907, according to Mr Faizal.

The restaurant was opened in 2008 at a time when the fine-dining options available to the Perth market were clearly distinct from more casual offerings.

While Mr Faizal says 1907 was at the ‘edgier’ end of that fine-dining scene, the market has become more crowded.

“Over the years, casual dining is sort of dissipating, and now you have your middle market, which is upmarket bistro dining; that brings the fine-dining market within reach of a lot more people,” he says. ‘Because it’s the high-end market we can’t afford to be decreasing prices, so we’ve decided to increase the value of the product instead and it’s really enhanced the experience for our customers.”

As a mark of his dedication to enhance that dining experience, Mr Faizal is firm in his view that tables shouldn’t be turned over for a second sitting in one evening.

Instead, each table accommodates one sitting per night, meaning wait staff will spend their entire shift looking after only about 10 guests.

Corporate clients make up much of the establishment’s clientele during the week, while on weekends people celebrating special events or ‘foodies’ are the most likely to book a table or the private dining room.

The venue also led the way into the small bar scene when it secured one of the city’s first small bar licences, in 2007.

Rather than trying to compete with the array of potential drinking venues in the CBD, however, Mr Faizal says it’s more about sharing the market with competitors and establishing a clear point of difference.

In another attempt to set the restaurant apart from peers, the private owner of 1907 has bought a farm in Toodyay so the business can grow its own produce.

The kitchen - run by head chef Alan Desouza - currently relies on vegetables and herbs from the 100-year-old farm. However, it’s envisioned that within 12 months the bulk of produce and meat will be supplied from the Toodyay operation, which will also begin selling to other restaurants within Perth.