11 ounces to the tonne gold for King River in Kimberley

King River Copper has reported another outstanding gold drill result from a narrow, but ultra-high grade vein at its Mt Remarkable gold project near Kununurra in W.A. The intersection of 6m @ 60g/t gold from 24m down-hole, included an exceptional, 0.3m @ 354g/t gold from just 24.7m. Additionally, the company said that scoping study results for its separate Speewah vanadium and fluorite projects will be reported by month’s end. 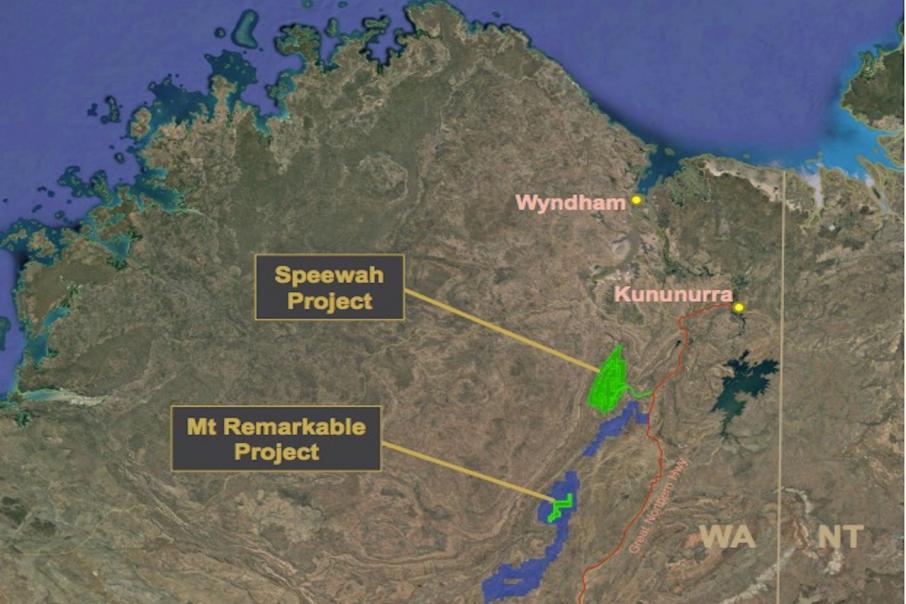 ASX listed vanadium and gold company King River Copper has drilled into a vein going 11 ounces to the tonne gold at its Mt Remarkable prospect near Kununurra in Western Australia.

Significant gold grades were intersected within fractured and brecciated sections of a distinct quartz-adularia vein, known as the Trudi vein system.

Close-spaced RC drilling over the past few months has steadily extended the limits of the high-grade vein network that had only been drilled relatively sparsely in the past.

The company said that assays are currently pending for 10 holes at the project in both shallow and deeper locations within the ore system.

King River is also undertaking step out drilling up to 60m east of the main Trudi Vein area.

Whilst the exploratory step out drilling produced modest results, King River has intersected broad, strong zones of quartz-adularia veining over at least 200m of strike at the Trudi east extension, which the company describes as being very promising.

The higher-grade mineralisation is believed to be controlled by the intersection of the Trudi Vein and Grahame Vein sets, leading to a blow out in the gold grades where they intersect at Trudi main.

Similar structural intersections found elsewhere at Mt Remarkable are likely to have similar upgrades of gold, according to the company.

King River management said: “… recent exploration drilling undertaken along strike of the main high-grade Trudi discovery has identified zones where the host quartz/adularia structures have thickened to widths in excess of 30 metres.”

“The highest priority of our geological team now is to try and chase, along strike and down dip, the intersection of the Trudi and Grahame structures, as they appear to have influenced our highest grade outcomes to date.”

The company has also been on the hunt regionally at Mt Remarkable and has identified and now drilled new sets of quartz veins at the Southern Veins-Jeniffer prospect, 4km southwest of Trudi and the Northeastern Vein, 3.5km northeast of Trudi.

Company management added: “… the identification of 2 new and quite separate mineralised vein systems, one 4km to the south west of Trudi main and the other 3.2 km north east of the Trudi vein also greatly enhances the potential of our overall Whitewater Volcanic applications measuring some ~3,000 square kilometres.”

King River is planning to continue reconnaissance exploration and soil sampling programs across the Mt Remarkable tenements during the coming months with a view to identifying other prospective future drill targets.

Resource drilling is also ongoing at the Trudi vein system and exploratory drill testing continues over the Trudi east extension.

Also this week, King River provided an update on its separate Speewah vanadium and fluorite projects in the east Kimberley of W.A.

The company has scoping studies underway for both projects at present, with the vanadium study due for reporting at the end of September and the fluorite study planned for reporting for mid to late September.

CSA Global has completed a concept mining study for the world-class Speewah vanadium project, which is the largest undeveloped vanadium deposit in the world, containing over 14 million tonnes of vanadium pentoxide.

The Primero Group has completed an internal desktop report for use in the vanadium scoping study and has provided a detailed beneficiation plant design, with estimates of indicative capital and operating costs.

King River is conducting metallurgical test work and studies for the vanadium project, with the aim of assessing which processing route, or combination of different processes will provide the optimal direction for developing the vanadium, titanium and iron deposits at Speewah.

For the separate Windsor fluorite deposit at Speewah, CSA Global has completed a concept mining study and is now managing the final steps for the scoping study due later this month.

King River said: “The evaluation of the best direction to be taking to develop and/or market the Speewah deposits relies materially on the detailed process routes and economic studies currently being undertaken. Development planning may very well include the option to export portions of concentrate production.”

“While direct leaching testwork is at a very early stage, there may also be an opportunity to heap leach lump ore, or an agglomerated crude concentrate, to extract V2O5 and Fe2O3 and then reprocess the remaining dump material in a manner that would extract the residual ilmenite to produce TiO2.

“The Board is very focussed on maximising the key strategic variables of the Speewah deposits, namely, their massive size, the outcropping flat lying geometry, the overall consistency of grades amenable to large scale mining methods and the unique tenor of the magnetite that enables the generation of a higher V2O5 grade concentrate compared to most peers.”