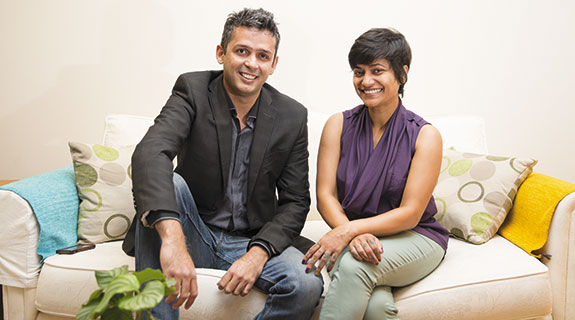 GIVING IT: Pankaj Sharma with one of his eKarma co-founders, Kim Soans Sharma. Photo: Attila Csaszar

A Perth startup raising funds for charity by piggybacking on shopping purchases made online is well on its way to making ‘giving’ cool and simple, according to its founder.

Pankaj Sharma told Business News his social enterprise, eKarma, had signed up 17 charities and social enterprises, as well as 280 online stores and hundreds of users, in less than four months since its launch.

Mr Sharma, who founded eKarma with Kim Soans Sharma and Neil Gibson, said his social enterprise drove web traffic and businesses to shopping site partners, which then gave a commission for every transaction, 50 per cent of which is directed to a shopper’s charity of choice.

The remaining 50 per cent commission is then used to run eKarma.

“As a tech-based giving platform, eKarma is on a journey, a mission, to make the world realise how simple giving can be; actually it’s quite cool too,” Mr Pankaj said.

“Especially when you can use a daily normal habit of online shopping to do that. The best part, it doesn’t cost you a cent more.”

“Australia is a very giving country, but I felt there was a missing link.

“Last year, Australians bought $16.6 billion worth of stuff online; that’s grown by 9 per cent, but fundraising was down by 6 per cent in 2014.

“I thought there was an opportunity to create a platform which supports charities by using online shopping.”

With help, eKarma has already registered its name as a trademark in India, the US, New Zealand and the UK, and begun plans to grow and operate internationally, once it has shored up its concept in Australia.

“About 600,000 charities and not for profits operate in Australia, and there are millions of volunteers and supporters already aligned to a cause,” Mr Sharma said.

“If we use that as a market and say these are conscious consumers, people who want to give back, within a year if we get 40,000 active registered shoppers we will be able to raise more than $2 million for charities alone.”

Mr Sharma said he hoped more Australian consumers, companies and charities would use eKarma so it could grow and eventually increase the percentage of commission it gave to charities, keeping only enough revenue to keep the business sustainable and competitive.

“The dream is to actually replace the concept of e-commerce with eKarma,” he said.