Perth's lord mayor has called for WA's mask mandate to be rolled back by the end of the month, while declining to get behind removing the state's vaccination requirements. 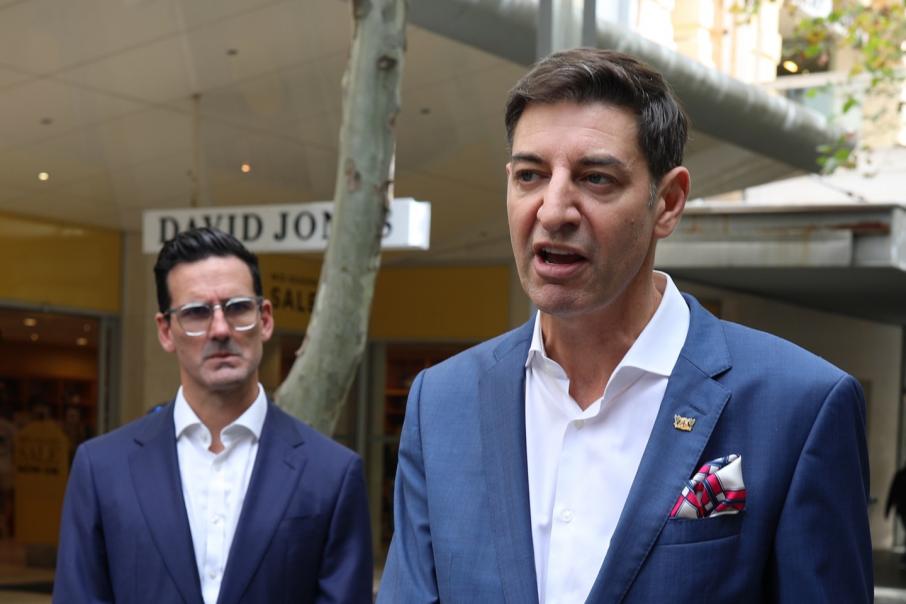 Perth's lord mayor has called for Western Australia's mask mandate to be rolled back by the end of the month, while declining to get behind removing the state's vaccination requirements.

Basil Zempilas appeared alongside Chamber of Commerce and Industry of WA chief executive Chris Rodwell this morning to announce business grants of up to $20,000, $100 top-ups for City of Perth parking card holders, and free busking permits for new performers.

Up to 200 businesses will also be able to access six months of free membership to CCIWA, provided they employ fewer than 29 full-time staff.

Today’s announcement follows an earlier tranche of support from City of Perth, including free al fresco dining permits and grants of up to $5,000, to aid businesses affected by COVID-19 restrictions.

It comes as WA has recorded more cases in recent weeks than health modelling had originally predicted, while hospitalisations and deaths have so far lagged what has been expected.

That’s led several industry bodies, including Property Council of Australia WA Division, to call for an end to the state’s mask mandate, arguing it was having a negative impact on visitation to Perth’s CBD.

Mr Rodwell, who has previously stated his desire to see WA’s mask mandate removed, reiterated his support for the move today.

Asked whether he would like to see the state government go further and remove capacity limits and vaccine mandates, as Queensland's state government did earlier this week, Mr Rodwell declined to offer his support.

He said removing the capacity limits should be considered after the state government gets rid of the requirement to wear a mask indoors.

“The number one game in town is obviously the mask mandates,” Mr Rodwell said.

“They’re the biggest impact in terms of getting people returning to the CBD.

“We understand that the state government takes health advice on those matters, but [removing] mask mandates are absolutely the key to getting our CBD back and as vibrant as it possible can be.”

Mr Zempilas didn't offer his view on changing capacity limits but similarly declined to back removing vaccine mandates, noting he and his family were fully vaccinated against COVID-19.

“That’s enabled us to do certain things in the community,” he said.

He further noted that wearing a mask should be considered a personal choice, while flagging the end of this month as an appropriate date to remove the mask mandate.

“In my mind, Anzac Day might be the right line in the sand,” Mr Zempilas said.

“That’s towards the end of this month … by then, I would imagine that we will have a confirmed downward trend in the daily COVID case numbers, and it would seen not to be rushing into lifting the mask mandate.

“It would be the right balance, I think, between being conservative, but mindful for what our city needs.

“Towards the end of this month strikes me as perhaps the right time to say to people, ‘You can go to work now and you don’t have to wear a mask behind your desk’.”