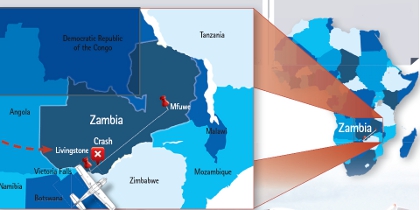 A lengthy battle to determine accountability for the deaths of three Western Australians in Zambia has uncovered a labyrinth of confusion and concealment, and highlighted the risks of operating in Africa.

Nearly a decade after the 2004 plane crash that killed Justine Watters, her husband Matthew, and Matthew’s mother, Shirley, the search for answers has now received bipartisan support from key federal politicians.

But despite the involvement of political heavyweights in both Australia and the UK, Justine Watters’ father – Perth businessman Sam Morton – has been told there is little likelihood of a formal prosecution.

On September 9 2004, the Watters group and two friends from the UK – Justin and Rebecca Ward – boarded a plane flown by Canadian pilot Mike Channer for the return leg of a trip to Victoria Falls on the border of Zambia and Zimbabwe.

The plane itself was an unremarkable Cessna 210, like those used by many Western Australian miners on trips across Africa.

South African company Nelair Engineering was responsible for maintenance of the Cessna, which was owned by a private charter company.

Only 40 kilometres into the flight from Livingstone to the Zambian town of Mfuwe the plane crashed, killing all on board; investigations revealed the plane’s propeller had fallen off in mid-air.

The investigation by the Zambian Department of Civil Aviation indicated Nelair was at fault for improper maintenance.

According to investigators, Nelair Engineering had failed to properly secure the propeller to the plane and had been using unidentifiable and uncertified parts.

As expected, the company had its maintenance licence cancelled by the South African Department of Transport. At this point (December 2006), it appeared progress was being made in holding those responsible for the six deaths to account.

Shortly thereafter, in August 2007, a plane operated by Nelair crashed, while in 2010 another Nelair plane was forced to make an emergency landing.

Throughout this period, Nelair had continued to operate its own charter flights despite the South African National Prosecution Authority stating the company was likely to be charged with culpable homicide over the crash involving the Watters’ plane.

The National Prosecution Authority began formally investigating the incident in April 2009 but has hit successive brick walls in its attempts to lay charges.

Integral to the NPA’s investigation is forensic information given to the South African Civil Aviation Authority by the US National Transport Authority, which documented the cause of the crash as improper maintenance of the plane’s propeller by Nelair Engineering.

After repeated requests from the NPA, deadline extensions and postponed meetings, the aviation authority finally (three years later) confirmed the crucial information had been lost and remained unaccounted for.

That turn of events prompted the following statement from the NPA to Mr Morton.

“The time delay and failure of the relevant Civil Aviation Authorities to notify the South African Police Services, within a reasonable period of time, that a criminal investigation is called for, has resulted in crucial evidence being lost,” director of public prosecutions, Sibongile Mzinyathi, wrote in a letter to Mr Morton in September 2012.

“The loss of physical evidence, under the totally unsatisfactory back and forth movement thereof, represents an insurmountable obstacle in the further police investigation … on the available evidence I am not convinced that there is any prospects of a successful prosecution.”

That answer has not been good enough for key Australian politicians, however, with both WA Liberal MP Judi Moylan and WA Labor frontbencher Gary Gray criticising the investigation in federal parliament and calling on the South African authorities to work harder to reach an outcome.

The issue has also been raised in the British Parliament with the under secretary of state, Mark Simmonds, saying the government could do little to further the case other than continued correspondence seeking an outcome.

Over the years, prime ministers Julia Gillard and John Howard, and foreign ministers Bob Carr and Stephen Smith have written personally to Mr Morton expressing their intention to obtain answers.

To the frustration of Mr Morton, no further progress has been made.

In a lengthy interview with WA Business News, he said he was not looking for a scapegoat, but simply wanted a proper and full investigation.

“I’ve got no axe to grind with this company; it’s a natural progression of the truth,” Mr Morton said.

“I’ve got no problems with Nelair, if it came back that it was just an unforeseeable accident or minor negligence then we’ve got to live with the fact that there was a tragic accident in our lives eight years ago.

“But at every turn it’s been like a snowball and the lies and the corruption have grown.

“In a way the story’s not about me or even about them (the deceased) anymore; it’s about the way that government agencies have acted afterwards.”

The incident has provided lessons for the Australian authorities and particularly the Department of Foreign Affairs and Trade, which overhauled its procedures in how to deal with air accidents in Africa.

A case in point was the much faster response to the plane crash in the Congo, which killed six Sundance Resources board members in 2010.

Of most concern to Mr Morton is the possibility that some elements of the Nelair business appear to have been moved to another operation – Raylen Turbine Services – which also supplies aircraft engineering services.

It’s that which has raised concerns from Mrs Moylan over the safety of Australian nationals travelling in Africa and her calls for a full and proper investigation.

“These are very serious matters,” she said in parliament.

“They must be investigated and the questions must be answered.”