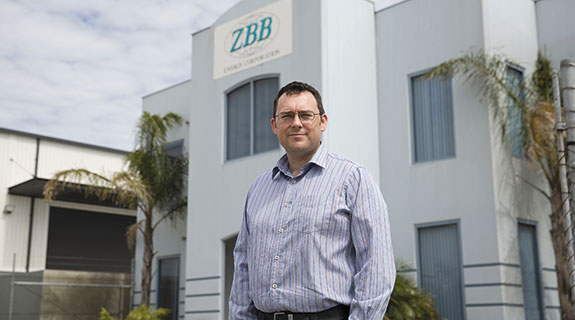 In the process, it has (to this point) accumulated a debt of almost $US90 million since its incorporation in 1998.

ZBB has 58 staff in Wisconsin and is listed on the New York Stock Exchange. It recently decided to hit pause on having a WA presence, and has set in motion plans to temporarily close its research and development office in Bibra Lake.

It counts the University of Technology Sydney among its Australian customers.

Earlier this year, ZBB signed up a 350-unit apartment block in Hawaii for a hybrid system, which, via a power purchase agreement, will reportedly save the building’s investors $2 million in energy costs over 20 years.

ZBB’s share price has proved extremely volatile since its 2007 listing on the NYSE, fluctuating between a low of 40 US cents and a high of $US30.

Since the beginning of this year it has traded between 51 and 83 US cents.

One target market is island dwellers, for whom Mr Hanson said ZBB was able to offer cheaper and more flexible power compared with diesel.

The company is also focused on the commercial and industrial sector, which Mr Hanson said was a good match for its more established scalable turnkey products; and it’s trying to crack into the power utility sector, through the development of a battery product that can be integrated into systems providing up to 12MWh.

After a presence in WA since the late 1980s ZBB is now set to shut its doors temporarily on its Bibra Lake facility for an unspecified period of time.

For now Perth based battery product development manager Nathan Coad will relocate to Wisconsin where the business will continue to pursue a global market.

“Our most lucrative markets are definitely the US, the Caribbean, and Pacific Islands,” Mr Coad said.