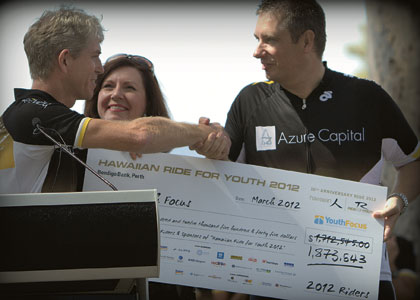 When Geoff Rasmussen steps down as chairman of Youth Focus in June, he will have had nine years on the board and a newfound appreciation for cycling.

The Azure Capital co-founder took part in Youth Focus’ premier fundraising event, the Hawaiian Ride for Youth this year, cycling the arduous 700km route from Albany to Perth with 91 other riders.

Having seen the impact of the event from a fundraising perspective, participating gave Mr Rasmussen a new respect for what was involved in the ride.

“It was a good thing to do in my last year on the board, it was the 10-year anniversary of the ride, so an important ride … and it was a great challenge to set myself to try and lose a bit of weight and get fitter,” Mr Rasmussen said.

“It is a huge time commitment, the training, fundraising and taking a week of your four weeks of holidays to do the ride.”

To commemorate the 10th anniversary of the event, the ‘peloton’ was split into two, with one team riding up the coast and the other cycling inland, meeting at Mandurah and riding into Perth on the last leg as one large group.

“What I got a better feeling for is how strong the camaraderie is, it is a really wonderful microcosm of a community where everyone is looking after each other, egging each other on and having fun with each other,” Mr Rasmussen said.

“The whole ride is really good for one’s mental well-being, which is one of the beautiful ironies of the fact we are raising funds for a youth mental health organisation.”

The money raised through the March ride exceeded targets of $1.25 million, hitting a record $1.87 million.

That translates to $20,000 a person and makes the event the third-largest riding fundraiser (on a per-participant basis) in the country.

The final figure this year accounted for 38 per cent of Youth Focus’ total funding.

The organisation, which is planning to increase its service capacity significantly this year, is hoping to diversify the source of its funds.

Youth Focus chief executive Jenny Allen said a high percentage of income from one source created risk and she and the board were attempting to dilute the effect of this.

“In our strategic plans we are looking to get more government funding … and really to diversify our income in other ways,” Ms Allen said.

“We build a charity house each year, we are supported by Polo in the Valley, we do try and have diversity and this is a particularly large year for the ride for us.”

“We don’t need equipment or machines, we need qualified people to work with young people who are showing signs of depression, self harm and suicidal ideation.

“We must have people on board that are qualified to deal with some of those issues and, most importantly, which are youth friendly.”

Mr Rasmussen identifies the service Youth Focus has consistently provided as its biggest success over his term with the organisation.

“The greatest success of Youth Focus, I think, is that year on year it has been able to grow the number of young people it is providing that service to,” he said.

In June, Panoramic Resources managing director and current Youth Focus director Peter Harold will take over from Mr Rasmussen as chairman, under the organisation’s rotation regulations.

“I think it is healthy for organisations to rotate the board, I don’t think you want to have people hanging around much longer,” he said.

Mr Rasmussen is chair of Azure Capital’s corporate philanthropic fund, Azure Foundation, and said he would look to assume another not-for-profit board role within the next six to 18 months.

“You tend to live in your own world in the mining industry, where I spend a lot of my time … and don’t really understand how much complex social infrastructure there is in our community to make things work,” he said.

“It is great to get out and see that and it is an opportunity to give something back to the community.

“It is good karma and there is a good feeling that comes from being part of an organisation that is driven by things other than profit maximisation.

“There are governance skills that I wouldn’t normally get in the advisory work I spend most of my time in, so I have picked up new skills.”