PLANS for the first children's advocacy centre to be built in Australia have been stymied by bureaucratic red tape, threatening the centre's March 2010 opening date. 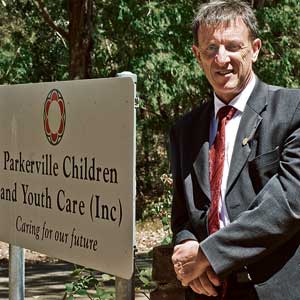 PLANS for the first children's advocacy centre to be built in Australia have been stymied by bureaucratic red tape, threatening the centre's March 2010 opening date.

Parkerville Children and Youth Care Inc wants to build the $5 million care facility in the 'high-need' area of Armadale to treat children and young people who have suffered trauma from sexual, psychical or emotional abuse, or from neglect.

The facility, to be known as the Armadale Community Child Advocacy Centre, will be the first of its kind in Australia, offering abused young people support, treatment and holistic care in the one location.

Parkerville Children and Youth Care chief executive Basil Hanna said while the proposed centre now had the support of Seniors Minister Robyn McSweeney, the health department and the corporate community, it had taken more than two years to get the proposal approved by the government.

"We're facing significant red tape and that is still ongoing," he said.

Mr Hanna said PCYC had struggled to secure effective cooperation from the relevant government and non-government departments, including the Child Protection Agency, WA Police, and the state government.

The centre has the backing of the Armadale Redevelopment Authority and Armadale council, which own the land chosen for the centre.

Mr Hanna said while approval for the centre was close to being finalised, the bureaucratic red tape and drawn-out approvals process was proving a frustration.

"This is not just about a building," he said.

"We're talking about a new methodology to helping these abused kids, something never offered before. We have this fantastic plan but it's taken so long for various departments to come on board.

"Our role is to repair the impairments to a child's brain as a result of the abuse they have suffered and to enable children to reclaim their childhood.

"We are creating a new way to provide care in a holistic way for abused children so that they can access the services they need in a timely manner. Currently that is not the case."

To build the centre, PCYC has had significant support from several corporate organisations, which have contributed between $100,000 and $200,000 by purchasing naming rights to a room.

Wesfarmers, Perron Group, Azure Capital, George Jones Family Foundation, Freemasons and the McCusker Foundation have so far bought the rights to have a room named after them within the centre.

Other businesses and individuals have contributed $3,000 each towards a 'stone' for the building.

"Many organisations showed an interest to be involved after hearing about the project at our annual sports charity lunch; it was difficult to attract one key sponsor," Mr Hanna said.

Sponsors get a room with plaque attached named in their honour, while stone purchasers' names are placed on a plaque in the front reception.

Since 1903, PCYC, a non-government, not-for-profit organisation, has operated under the auspices of the Anglican Church, providing care and protection to abused children and youth in need.

Its services include providing accommodation, education and training, and therapeutic care to children and young people aged up to 20 years.

It was originally established as an orphanage, called Parkerville Children's Home, but the name was changed to reflect the centre's main clients - 60 per cent children and 40 per cent youth.

"And [the new name was] also to send a message to our corporate sponsors that we are not a children's home but a range of diverse therapeutic and caring services across the metro area," Mr Hanna said.