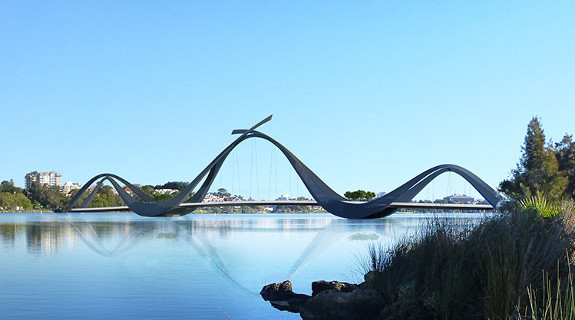 Adelaide-based York Civil has won its fourth substantial project in Western Australia since opening its Perth office in 2012, after teaming up with an Italian contractor new to the WA market to win the Perth Stadium pedestrian bridge contract.

York Civil has joined major Italian contractor Rizzani De Eccher to design and construct the bridge, which will span the Swan River.

The bridge will be 65 metres at its highest point and stretch 400 metres from Burswood to East Perth, with a steel cable-stay span of 160 metres at its centre.  It will be built on two piers driven into the riverbed.

Construction is scheduled to start later this year, with completion due by the end of 2016.

Premier Colin Barnett predicted the $54.1 million bridge would become a landmark in Perth.

The winning design - similar to a suspension bridge - was chosen by an expert panel headed by bridge engineer and former governor, Ken Michael.

“This design will deliver the best outcome for West Australians visiting the stadium precinct,” Mr Barnett said on Sunday.

“Some people will look at the design and see swans, others will see a Wagyl taking shape or a dolphin - and that’s perfect for this river environment.”

The bridge will be designed to take 14,000 people to and from major sporting events.

It will connect to bus stands on Nelson Avenue to move stadium patrons into the CBD on free shuttle buses.

The contract adds to York Civil’s success in the WA market.

York has completed a $31 million extension to the North Quay rail freight terminal, and is working on a concrete and piping package at the Water Corporation’s Rockingham wastewater treatment plant.

Another current project, in joint venture with Marine and Civil, is the $25 million strengthening of the Fremantle road and rail bridges.

The traffic bridge will have 62 piles repaired, and the existing timber fender system will be reinforced with new metal structures, while at the rail bridge, concrete dolphins will be constructed in-river to absorb significant force.

Another opportunity emerged last week when a joint venture between York Civil and local company Geogiou was named as one of four groups shortlisted to develop proposals for the Tonkin Highway upgrade, which forms part of the $1.12 billion NorthLink WA project.

The recent contract awards include:

Ms Davies said more than $180 million of stadium construction contracts have been awarded, with $156 million worth going to local companies.

Earlier this year, two other significant local contracts were awarded - $30 million for supply of formwork and concrete by Embleton-based CASC; and $73 million for steelwork by Henderson-based Civmec Construction and Engineering.

The Perth Stadium is due to be completed in 2018, in time for the AFL season.