Alister Yiap has explored a number of business models to find the best way to move his jewellery-meets-art into the hands of his admiring customers. 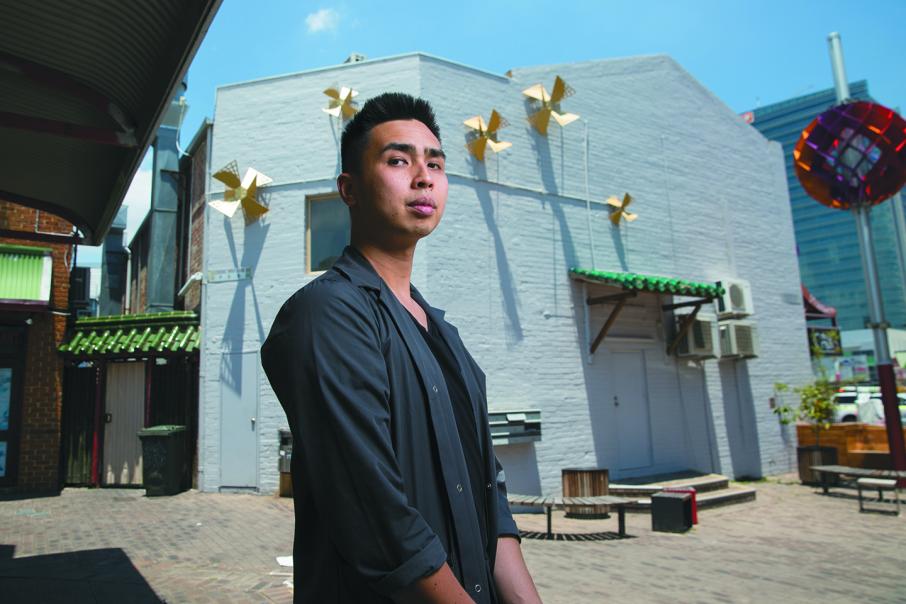 Alister Yiap with his wall artwork Fireflies 2016, on Chinatown’s Roe Street, which was commissioned by the MRA as part of the Perth City Link project. Photo: Attila Csaszar

Alister Yiap has explored a number of business models to find the best way to move his jewellery-meets-art into the hands of his admiring customers.

The winner of this year’s WA Young Achievers Award for Arts and Fashion, Mr Yiap’s style reflects a distinctive geometric aesthetic with precise measurements and attention to detail.

Graduating from Curtin University in 2007 with a bachelor of arts in jewellery design, Mr Yiap channelled his talents into curating bold jewellery pieces for the runway with a sculptural flair, despite there being little commercial opportunity for his work.

“It was great for press, great for exposure, but no-one was necessarily going to buy large pieces that were great for the runway and editorial, so the business side of stuff was getting difficult,” Mr Yiap told Business News.

Given the need to forge a sustainable business, Mr Yiap moved away from the runway and focused instead on a wholesale and retail plan.

“I sold through a website, through stores, wholesale, did tradeshows, but it was roughly around the GFC when I launched the label, so slightly luxury premium products were kind of not getting bought,” he said.

Mr Yiap said keeping up with fast fashion was not something small operators could do.

Producing in large quantities using Chinese, Balinese and Thai suppliers was also problematic, he said, as the quality of materials sometimes failed to meet his standards and suppliers set minimums that made ambitious targets.

“I was like, ‘I can’t keep producing and funnelling money into this when I don’t necessarily know if I’ll get the sales’,” Mr Yiap said, choosing to cease large-scale operations and opt for commission sales.

“Now I only do commissions, so I only order materials and supplies when I have an order; it’s a much safer option because I know the sales are there,” he said.

Mr Yiap said he always tried to find something different to each design, drawing them up himself and often outsourcing skills in areas such as gem settings.

“I can make a Tiffany copy, it will probably be cheaper than Tiffany’s but it’s not going to be a Tiffany and Co’s so what’s the point in me doing it?” he said.

Mr Yiap said he had also upscaled his work and created sculptures for the past several years, selling to clients such as Ronald McDonald House.

“The most lucrative (medium) is the public art commissioning, working with private clients and government,” he said.

Mr Yiap said he had produced commissions for clients including City of Melville, City of Armadale, and Crown Towers Perth, with commissions for Mandurah Forum and Blackburne on their way.