The proposed redevelopment of the Midland Railway Workshops is set to enliven the historic centre. 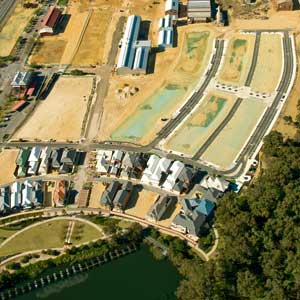 POTENTIAL: The expansive railway workshops site is being reclaimed and transformed into a mixed-use activity centre.

A PRIVATELY funded university campus, a state-of-the-art healthcare centre and a creative industries hub are among the features of a proposed program of urban renewal at the heritage-listed Midland Railway Workshops.

Behind the university concept is Raffles Education Corporation, a higher education provider based in Singapore, with campuses throughout South-East Asia.

Raffles Education has a concept plan through 2030 allowing for 10,000 students at its Midland campus, with 50 per cent of those coming from international destinations, and intends to invest more than $100 million in the campus' first five years.

Speaking at a City of Swan function last week, Premier Colin Barnett gave his support for the Raffles plan.

"As far as the university is concerned, the government does approve of that project," he said.

"What is required is simply an amendment to higher education legislation.

"I would hope with cooperation we would have that through parliament by the end of this year and that would remove the final obstacle to that university investment taking place."

The Midland Health Campus is a $360 million, 335-bed replacement for the existing Swan Districts hospital, and will be jointly funded by the commonwealth and the state.

"One of the ways to go about reinvigorating the town is to work towards moving from a blue-collar economy towards a knowledge economy," Mr Kinsella said.

"The synergies and the economic attraction (of the university and health campus) working together will be an added boost to the work we're doing, and certainly will make the transition of Midland to a knowledge-based economy happen."

Mr Barnett said the hospital funds were already in place and design and construction timetable discussions were ongoing.

The MRA has also partnered with not-for-profit cultural organisation FORM to establish the Midland Atelier, a creative hub for artists-in-residence at the old pattern shop and foundry site at the workshops.

The Atelier will bring together artists in fine wood, glass, metal, jewellery and sculpture.

"The railway workshops in their heyday were a centre of excellence and innovation in the crafts and the Atelier is a very good way to link the historical past of the workshops to the future of the town," Mr Kinsella said.

"It's a pretty well-known established fact in urban renewal that if you're able to bring in the artisans and creative people to the town it brings a certain flavour to the town and it adds a personality.

"We hope to get quite a number of people taking studio spaces, and support that with exhibition space, retail space and some office space and perhaps even a cafe space as well."

The centre sits within the old workshops, and has 7,500 square metres of office space, allowing for up to 650 police personnel to be based at the site.

"They've got a lot of land that has the potential to develop other facilities on the site," he said.

"We're hoping in time as the police roll-out their master planning for the site there will be more people that relocate to Midland."

According to Mr Kinsella, in the next 15 years the City of Swan expects to take on a further 50,000 people.

"It's a significantly fast growing local government authority area on a national level," he said.

"Midland is moving towards that regional centre that people will come and choose to live in and want to enjoy the lifestyle that the town affords and provides."