Working to bridge the gap 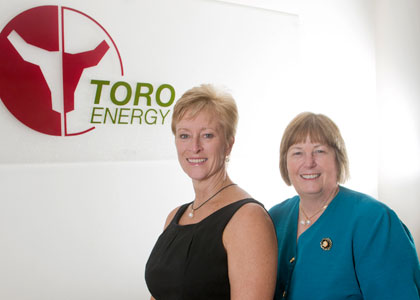 VANESSA GUTHRIE: (left) "I think we would like to feel that we had left a positive legacy and cracked a few of the barriers, or at least forged a bit of a path."

“It’s not that they don’t want to work hard, but perhaps they make a different choice of the balance of things that they want in their life.”

Toro is a rare beast in any section of corporate Australia, let alone WA’s male-dominated resources industry - a company that, with Dr Guthrie taking the top job last week, has both a female managing director and a female chairman, in mining veteran Erica Smyth.

While Dr Guthrie was a natural fit for the role of managing director, having previously acted as executive general manager of the uranium miner’s flagship Wiluna project. she said there was still much to be done to ensure more women were elevated to senior positions.

“I think for the young women of today who might be just entering the resources sector, there’s a bit of me that would hope it’s actually a bit easier for them than it was for Erica before me, and had been for me,” she said.

“I think we would like to feel that we had left a positive legacy and cracked a few of the barriers, or at least forged a bit of a path.”

Female executive and company board representation remains stubbornly low across Australia compared with most OECD countries, but it’s in WA - home to more than a quarter of all ASX500 companies - where the disparity is particularly jarring.

The 2012 Australian Census of Women in Leadership, undertaken by the federal government’s Equal Opportunity for Women in the Workplace Agency, found that WA is lagging behind other states in terms of women’s representation at executive level.

The census found WA has the lowest proportion of women in executive management of any state, with just 5.1 per cent of executive positions in ASX 500 companies held by women - almost half of the national average of 9.2 per cent.

In WA, women are also far less likely to sit on the board of an ASX 500 company than their counterparts in other states; just 3.5 per cent of directorships are held by women in WA compared with 9.2 per cent on a nationwide average.

Beyond the top end, the results aren’t much different. Research conducted this month for WA Business News Book of Lists reveals that, of the 2,927 WA-listed public company directors, only 196, or 6.7 per cent, are women - a slight increase on the 5.7 per cent recorded in 2012.

While there is no doubt that many companies are taking steps to improve the gender mix, a recent study suggests more substantial action may be needed to break what’s been described as the ‘negative gender diversity cycle’ in corporate Australia.

More than 53 per cent of women surveyed by Bain & Company and member-based organisation Chief Executive Women were unlikely to recommend their workplace as a good place for women to progress to senior positions, with sentiments particularly negative among women in junior and middle management roles.

While organisations such as the Women’s Leadership Institute of Australia have called for companies to introduce quotas for the number of women on boards, the leading businesswomen who spoke to WA Business News were unenthusiastic about the idea.

“The more difficult path, but the more preferable path, is to talk to people about how they perceive what the barriers and hurdles are, and then tackling these.”

East Africa Resources chief executive Katina Law said part of the diversity problem was that many companies, particularly on the smaller end of the spectrum, tended to be influenced by predominantly male-dominated referral networks.

“A lot of smaller companies are put together by networks of people, and those networks tend to be dominated by men,” Ms Law told WA Business News.

“It’s men who sit on the boards of these companies, and even if they know competent women, they don’t see it as their role to get them a job or to include them in those networks; so it’s quite difficult for women to break in.”

Sixty per cent of businesswomen who responded to a survey undertaken last year by Executive Women Australia said male-dominated referral networks were one of the biggest barriers to landing an executive position.

Ms Law - who worked as a site accountant for Argyle Diamonds before moving onto roles with BHP Iron Ore and Newmont Mining and launching her own consultancy firm - said she was used to putting her point of view across at this point in her career, but that it wasn’t easy for women starting out in the industry.

“We’ve had women participating in the mining workforce for at least the past 40 years,” she said.

“There are qualified women out there and people should consider all the candidates, not just the ones who are particularly in their network.”

Ms Law was one of eight WA recipients of the Australian Institute of Company Directors 2012 board diversity scholarships, recognising high-performing women in business.

Another WA businesswoman to be recognised with an AICD scholarship was Woodside Energy’s vice-president environment and heritage, Jill Hoffmann, who agreed that the resources industry needed to get better at tapping into the pool of capable women in the industry.

“The research is there to demonstrate that if you have better balance and gender diversity you tend to be a far more profitable company,” Ms Hoffmann said.

“Everybody’s after shareholder return, so you’d think at some point the two have got to connect.”

However, Ms Hoffmann said she was fortunate to have taken on a wide range of responsibilities within Woodside, from marketing and analysis roles to putting together the company’s first liquefied natural gas shipping fleet for the major Pluto project.

“Part of Woodside’s diversity strategy is that up-and-coming women and existing senior women have equal opportunity for those senior roles, and there’s been a lot of work to take the bias out of those selection processes,” she said.

Toro chairman Erica Smyth, who blazed a trail for women in resources as a young geologist in the 1970s, said the benefits of standing out as a woman in a male-dominated field far outweighed the negative treatment she had received at different points in her career.

“I suppose it was a challenge for me because there weren’t many other women around where I was working; but I stood out in the crowd, so as long as I behaved well I got noticed, and therefore there were plenty of good blokes who gave me a chance,” Dr Smyth said.

“So I can’t really say that my gender was a disadvantage very often. There were times I could pick out where I could say ‘oh yeah, it was probably my gender’ but I think the benefits of being noticeable and remembered far outweigh anything that might have been negative for me.”

Dr Smyth’s determination is echoed in the experiences of a leading woman in resources from a younger generation - Sarah Coleman, a finalist in the Chamber of Minerals and Energy’s Women in Resources Awards 2013.

Ms Coleman, managing director of business development consulting firm Improvement Resources, deals with some of the biggest players in the resources sector on a day-to-day basis, but it was in formative roles with Rio Tinto Iron Ore that she faced her greatest challenges.

At just 26, Ms Coleman was made a superintendent at Rio Tinto’s Bell Bay smelter, managing staff with more than 30 years’ experience at the smelter.

She went on to be appointed Rio Tinto Iron Ore business improvement manager in the aftermath of the GFC in late 2008, with the challenge of downgrading roles and restructuring a team of employees made all the more difficult due to her relative youth.

“I very much took the approach that just because I had an education or a degree or just because I was female ... I didn’t need to be treated differently,” Ms Coleman said.

I felt that I had the same right as anyone else to be there and I got there on my merits, so it was a matter of just getting in and getting results.”

One of the main hurdles for career women is the difficulty of juggling the demands of working life with family commitments.

Former US Department of State director of policy planning, Anne-Marie Slaughter, writing for the Atlantic magazine last year, articulated the trade-offs made by women who pursue demanding careers.

Professional women are forced to make decisions that men do not have to make, Slaughter wrote, and to glibly state that they can ‘have it all’ is to airbrush reality.

Federal deputy opposition leader and prominent Western Australian Julie Bishop, who recently described herself as an adherent to the “Anne-Marie Slaughter school”, is one of many successful women who chose to put their career ahead of having children.

However, while professional women still face tough decisions when it comes to putting their careers on hold to raise a family, employers are beginning to adapt to demands for greater flexibility in working hours and practices.

Ms Hoffman, who has two young children, said she found coming back to work from maternity leave difficult but that Woodside was far more progressive now than it had been at that time.

“Woodside’s very flexible in that regard and I think we’re getting better and better at it,” she said.

“On my leadership team I have two women who job-share, and both of them work part-time, so it can be done."

A number of major companies have endeavoured to incorporate greater flexibility into senior positions in recent years, allowing roles to be undertaken in non-traditional hours.

For Ms Pedersen, who hopes to use her role at Engineers Australia to address issues with women returning to work from maternity leave, such strategies are a welcome change from the norm.

“Rio Tinto put out an advertisement a while ago specifically calling for a part-time geologist coming back from maternity leave. It was amazing to see it.”

“I think sometimes the difficulty is balancing the home demands and the work demands, and that’s part of the reason these women opt out,” she said. “But also, when you are one of the few women in the senior roles, it can be quite lonely in some respects.”

What’s particularly concerning for Dr Smyth is what she sees as a trend towards women leaving the industry once they reach their mid-40s, a time when they might be considered prime candidates for executive positions.

“We don’t seem to understand fully why that is happening, and that is really serious,” Dr Smyth told WA Business News.

“To my mind, that’s when they’re at their peak of performance; they’ve gone through all these learning curves … they really know and understanding themselves, (yet) they seem to be leaving the industry in droves. That bothers me, but I don't have an answer."