Resources companies need workers, while the state has the most job vacancies since 2012. 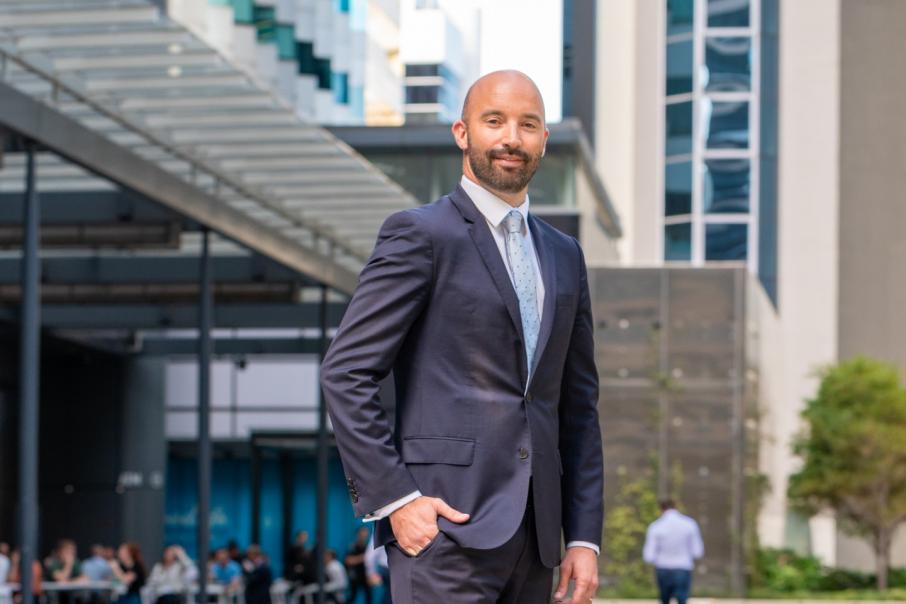 Stories of aspirational globetrotters heading to Western Australia during resources booms are part of the state’s economic folklore.

During the most recent resources boom, WA’s population grew by 538,000 in the decade to March 2014, according to the Australian Bureau of Statistics.

But as the industry again readies for growth in a high-commodity-price environment, this nascent boom has an additional challenge.

There were 24,151 job vacancies in WA in March, according to (statistically unadjusted) federal government data, the highest level since October 2012.

That month’s unemployment rate was 4.8 per cent in WA, the lowest level since December 2013, seasonally adjusted.

A series of resources businesses have warned the lack of workers is having an impact.

Fortescue Metals Group highlighted labour supply and access as a big factor in a cost blowout at its Iron Bridge project, while Mineral Resources told markets in April its exports were only 85 per cent of capacity because of a truck driver shortage.

The lack of drivers has caused alarm.

The federation represents businesses in the trucking industry.

In late April, the state government promised $6.1 million for Western Roads and the TAFE system to help train 1,000 truck drivers.

Mr Dumesny said those numbers would help make a fair dent in the shortage, which had been building even before COVID-19.

“[The driver shortage is] a big issue in the resources sector,” he said.

“Particularly junior miners. Mineral Resources has reported it, we know other junior miners are experiencing it.”

Beyond resources, agribusiness and construction need drivers, while the shortage extends to related fields such as mechanics.

A regional infrastructure project, the Bunbury Outer Ring Road, serves as an example of the requirements.

With construction due to commence this year, the project will require about 12 million tonnes of filler material to be moved, Mr Dumesny said.

“That’s the equivalent to the annual grain harvest for just one project,” he said.

The driver training will be through a six-week intensive course.

The number of positions available for geologists and geophysicists doubled to 166 between March 2019 and March 2021.

Demand for structural steel construction workers was even greater, up 166 per cent to 163 openings. 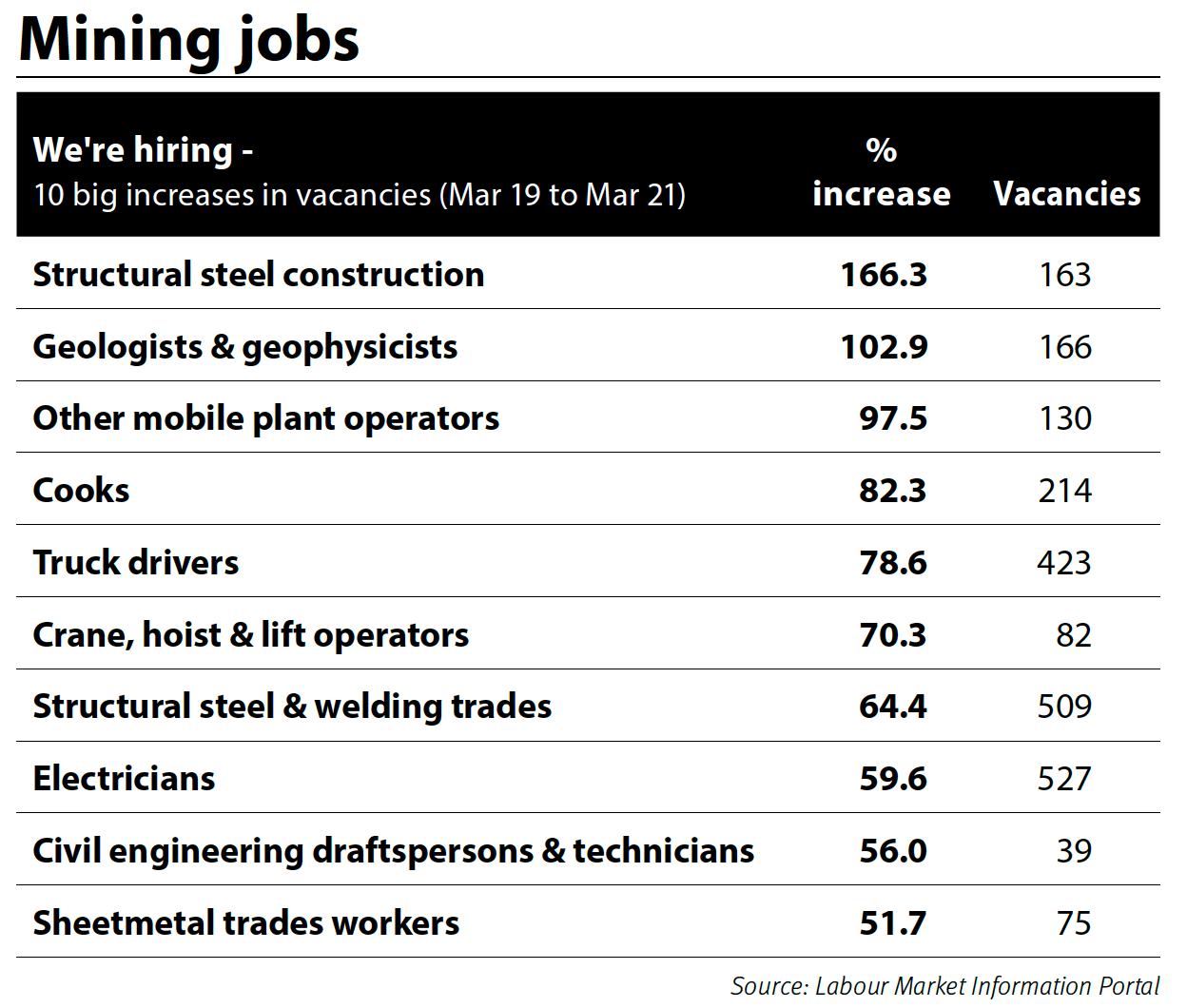 A lack of truck drivers and cooks will affect supply chains and mine camp sites, as well as other industries.

The numbers bear out increased demand for a range of other specialties.

Vacancies for environmental scientists, chemicals and materials engineers, and engineering managers all rose between 40 and 50 per cent in the two years to March 2021.

Openings for forklift drivers, civil engineers, electrical engineers and drillers, miners and shot firers were up between 30 per cent and 40 per cent across that same period.

Chamber of Minerals and Energy of Western Australia director of policy and advocacy Rob Carruthers said the demand for staff would exceed estimates made last year.

Modelling had suggested a shortage of about 10,000 workers in the industry, Mr Carruthers said, but it would now likely be many more.

“Labour shortages are a fundamental issue for industry at the moment,” he said.

“It’s something we flagged coming out of lockdown in 2020; it’s probably exceeded those predictions.”

Following the previous boom, there was also now a much larger capital base to maintain in resources, Mr Carruthers said.

Bigger resources businesses were already reporting pressure on production levels driven by shortages, and border closures had contributed to that scenario, he said.

“Most sections of the state economy are booming.”

He said the chamber was not advocating for international borders to be opened, but rather highlighting the need for WA to have a pipeline of people heading into entry-level roles, such as driller’s offsiders.

The state government had already made commitments on training but building experience in the workforce was likely to take years.

Interstate workers could be recruited, but there was strong demand elsewhere in the country, so Mr Carruthers said the state would need to promote opportunities for families to relocate and live here.

“Irrespective of COVID-19, if the industry and the economy were doing this well, we’d have this challenge anyway.”

Association of Mining and Exploration Companies chief executive Warren Pearce said the labour shortage, and a shortage of drill rigs, were the biggest problems for the industry.

But Mr Pearce was positive the sector was in a good position.

“All the problems we’ve got are good problems to have,” he said.

Nonetheless, the lack of workers would have a flow-on effect in project timing and on wages.

“Things won’t be able to be done as quickly, project builds will be slower.”

That meant proponents would have to carry construction financing debt for longer, exposing them to more risk and higher interest payments.

“You never know when the investment window is going to end … prices fluctuate.”

He said the worker shortage was more widespread than the previous boom, when the biggest challenges had been for more specialised roles.

In that period, demand for construction jobs had been filled with interstate workers, while the international workforce usually filled more specialised roles, such as drilling.

In the current environment, mining is competing less with the oil and gas sector for workers than it is with residential construction in Perth, Mr Pearce said, and there were plenty of small mining projects coming up.

In addition to workers, there’s a shortage of drilling rigs.

Labs that process samples also have substantial delays, which are affecting the ability of small miners to manage exploration programs and keep rigs on site long enough for lab results to be returned.

“There’s just a huge amount of exploration going on in WA, particularly.

“[But] it’s hard not to be positive about what’s happening.” 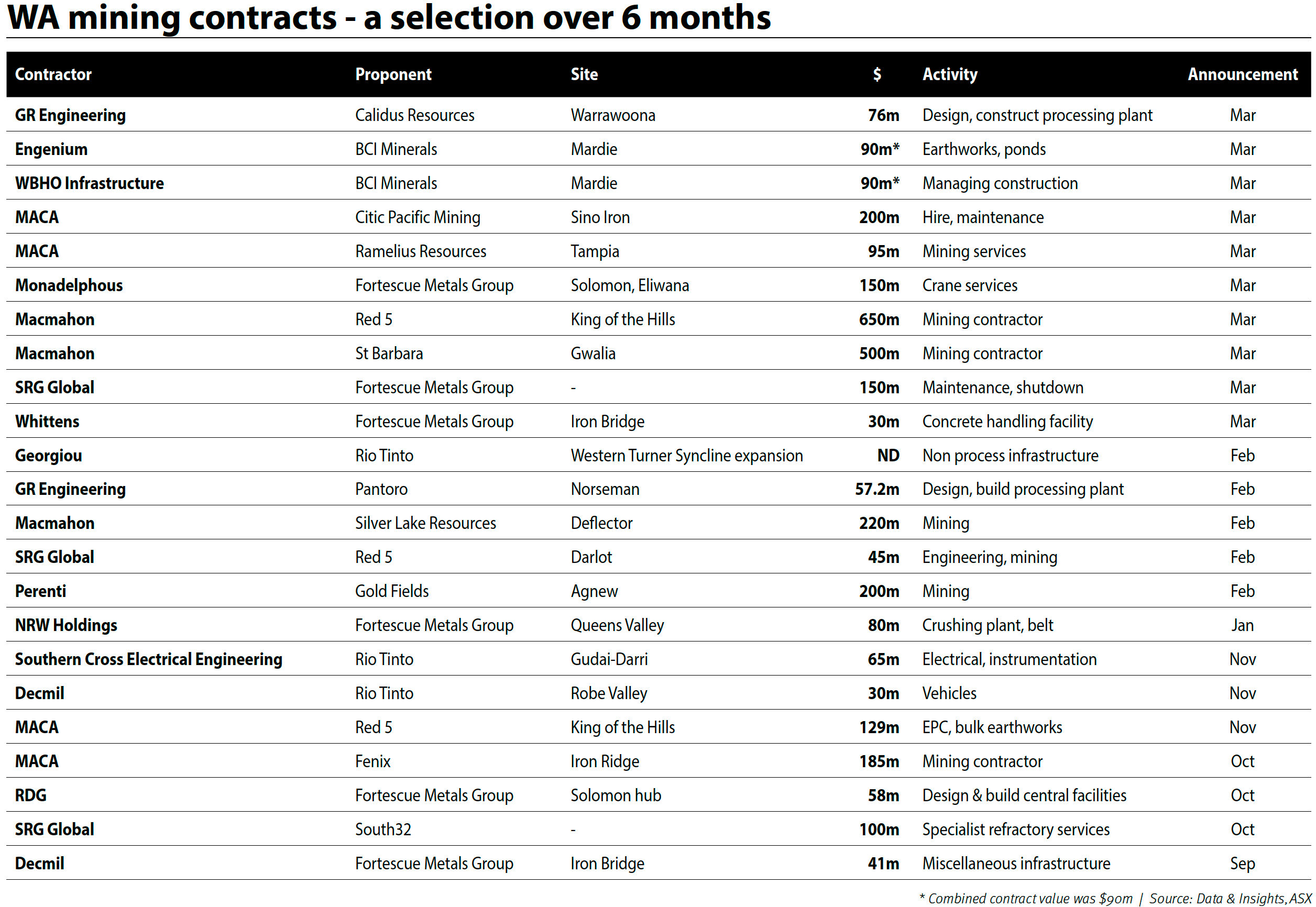 There was an uptick in demand for trades and for white collar workers, the latter being Michael Page’s focus.

The jobs on offer were new, additional roles, rather than solely replacements of workers leaving existing positions.

Mechanics and project engineers were on the list of in-demand positions, Mr McDougall said.

“The only difference is now all sectors are having shortages … compounding the issue,” Mr Kent told Business News.

“There was an issue before COVID and COVID just multiplied it massively.”

The border closures added to the challenge because WA was reliant on interstate workers, he said, but stimulus measures across the country would have meant east coast markets were harder to tap for labour regardless.

Blue collar skills had been in shortage for longer, although white collar roles were following as infrastructure projects were rolled out.

“These are the roles keeping mining executives up at night, they can’t produce their tonnages,” Mr Kent said.

Wages were increasing, in some cases up 20 per cent on a year ago, and businesses were moving away from casual roles to permanent positions to give employees security.

But because of the demand interstate, WA would need to work to position itself as a destination rather than relying on paying workers more to attract them west.

They wanted to know how well projects were funded, mine life, and have an idea of where a business was heading, because they wanted to take a long-term approach.

Business objectives and growth plans were as important as a roster, Mr McDougall said, and workers were more aware and interested in these themes than in the previous boom.

Contractors who spoke to Business News were optimistic about opportunities in a booming market.

While there were shared concerns about a tightening labour pool, corporate leaders had plans for expansion into new service lines.

Warrikal chief executive Amanda Healy said the business had won a series of contracts in the iron ore sector since 2017, signing its first major contract with Fortescue, now a major client.

The indigenous-owned maintenance business had probably doubled in size in the past year to about 600 people, Ms Healy said.

“Fingers and toes crossed, to date we haven’t had a huge amount of trouble finding people, but we’ll be hitting that point fairly soon,” Ms Healy told Business News.

“Things are getting tight, no doubt about that.

Warrikal will be exploring contracting for oil and gas businesses as its next growth option.

“We’re growing rapidly, which is challenging, interesting and wonderful all at the same time … we love it, we’re happy to take up the challenge,” Ms Healy said. 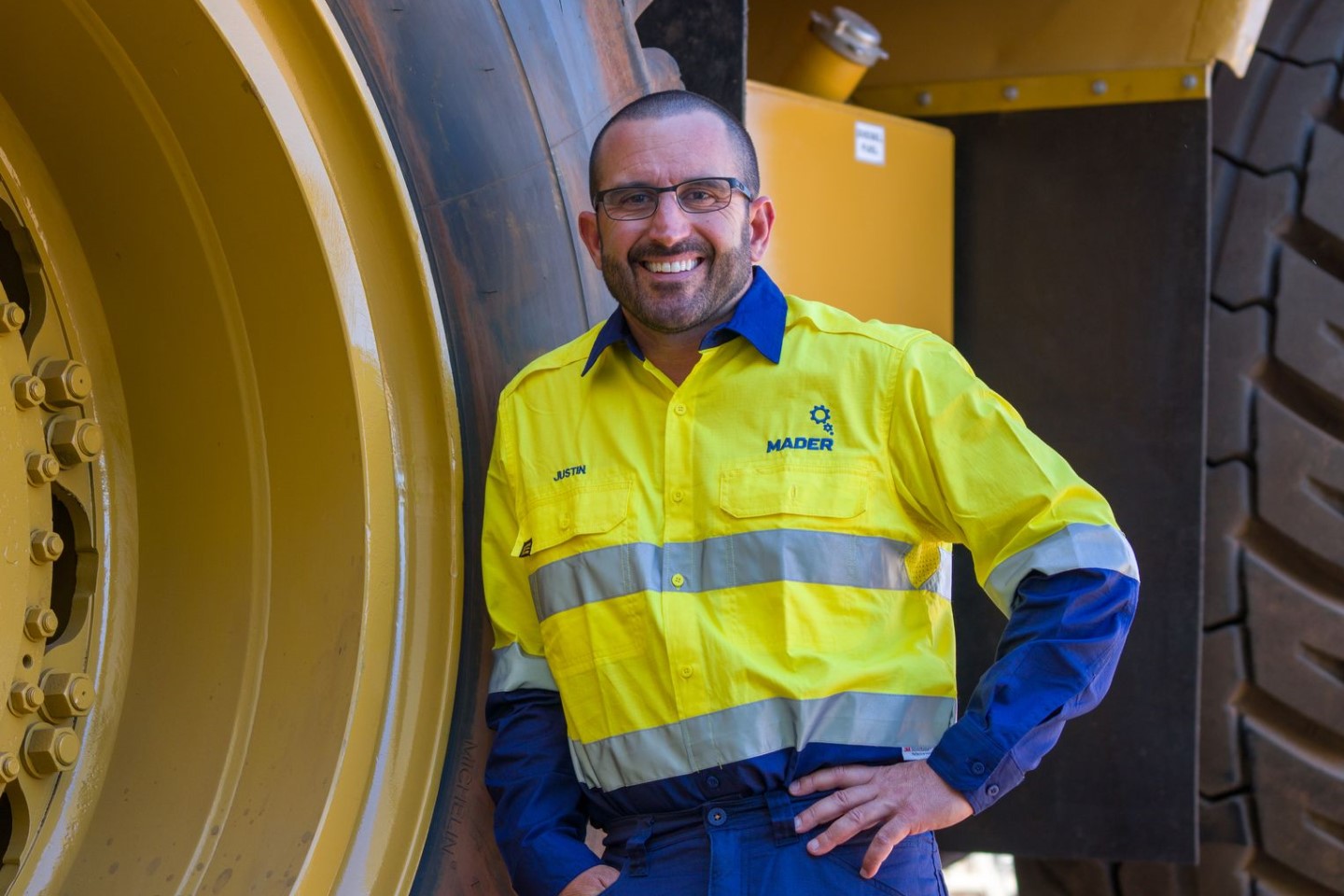 There was also an overseas expansion drive, with demand in Africa and potential in North America, he said.

“The demand for all our services is extremely strong.

“We’re pushing hard to get people on board.”

Mader sought to offer people career flexibility and options to move between business lines to attract staff, and had a strong recruitment team, Mr Nuich added.

Some maintenance work had been pushed back by COVID-19 restrictions, which had led to a backlog across the industry.

In addition, equipment purchased in the previous boom was coming up for major refurbishment, Mr Nuich said.

“There’s a lot of fleet that was delivered around 2012-15, it’s getting to the age it requires larger maintenance to be carried out,” he said.

“The business is ahead of where it was this time last year, despite COVID.

“There’s a lot of maintenance which clients are trying to catch up on, on hold from last year.”

Cranecorp recently announced a joint venture with Tutt Bryant to transition to a different segment of the crane market, including movement of super heavy objects and crawler cranes.

“Everyone is fishing in the same pond,” he said.

“There’s a large reluctance for many of the interstate people to fly-in, fly-out.

“Some have moved across.

“Others we [have previously used], it’s just not practical to bring them across.

“I’m confident we’ll get through it because people want to work for us.

“[But] the industry being in [worker] deficit is not a good thing; the pressure it puts on the supply chain, value chain.”

He estimated staff levels had doubled from two years ago to about 230.