Common sense is often forgotten when the topics of Chinese investment and farming get discussed. 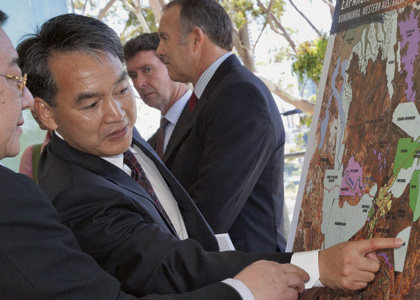 Common sense is often forgotten when the topics of Chinese investment and farming get discussed.

EARLY this month, the news that Chinese group Heilongjiang Feng Agricultural had bought a big farming property in the state’s south triggered renewed debate over the merits of Chinese investment.

In this instance, it was not just a case of buying and running a farm.

Reports at the time said the Chinese group had ambitious plans of buying large tracts of farm land in the Great Southern and building its own export infrastructure at Albany, to supply the Chinese market.

Rather than welcome this injection of foreign capital, the critics seemed to fear that traditional Australian family farming was being sacrificed in the interest of Chinese food security.

It came soon after another Chinese group, Shanghai Zhongfu, was named as the preferred proponent to develop new farm land in the Ord River irrigation area, in the state’s north.

And it followed an event that seems to have become a touchstone in this debate; the Chinese purchase early this year of Australia’s largest cotton farm, Cubbie Station, on the east coast.

That purchase had to get approval from the Foreign Investment Review Board, but that degree of scrutiny was not enough to satisfy the critics.

The Liberal Party has fuelled the debate by promising tighter scrutiny of Chinese investment in the farm sector. But in doing so, the Liberals in Canberra have again shown their increasingly conservative bias.

They have reacted, and given encouragement, to the many people who struggle to cope with change.

Yet, as this newspaper has repeatedly argued, change is one of the few constants in our lives.

The best way of dealing with it is to get a more informed understanding and to retain a balanced perspective.

The starting point for any discussion about Chinese investment is to acknowledge that foreign investment has always played big part in the state’s development.

This was a point Premer Colin Barnett pushed repeatedly, and correctly, when announcing the planned Chinese investment in the Ord.

As a country, Australia is short of the capital needed to develop our resources in a timely manner and there is no doubt foreign investment has supported our economic development.

It has also boosted the wealth of Australian property owners, by lifting the value of their assets.

The critics assert that Chinese investment is different and, to some extent, that is correct.

It usually involves state-owned enterprises, and they usually take a longer-term strategic perspective, tied in with getting security of supply.

But that does not mean commercial goals and disciplines can be ignored. Does anyone think CITIC Pacific is happy with the tripling in the cost of the $8 billion Sino Iron project in the Pilbara? Certainly not.

And is Sinosteel happy to have paid $1 billion to acquire Midwest Corporation, only to see its iron ore deposits stranded by the failure of the Oakajee port and railway project to proceed? Definitely not.

In fact, Chinese wariness about sinking more money into Australian iron ore is the major reason Oakajee has not proceeded yet.

This is an example of market discipline asserting itself, and checking the ambitions, even of Chinese state-owned investors.

The same discipline will apply in the farm sector, where debate is muddied by some very woolly thinking around the concept of food security.

A similar argument used to be applied by protectionists, who asserted that car manufacturing and the like was some sort of strategic industry.

For the most part, Australians have moved on from that debate and understand the benefits that flow from free trade.

Most farm produce, especially from Western Australia, is already exported, because that is the most efficient and highest-value use.

It’s far better to export wheat and other grains and to import food products that can be produced in other places at a lower cost.

Many ‘corporate’ groups have invested in WA farming over the years, from the UK, the US, Indonesia and elsewhere.

All of them have espoused ambitious long-term goals and all have ultimately been subject to the discipline of market forces.