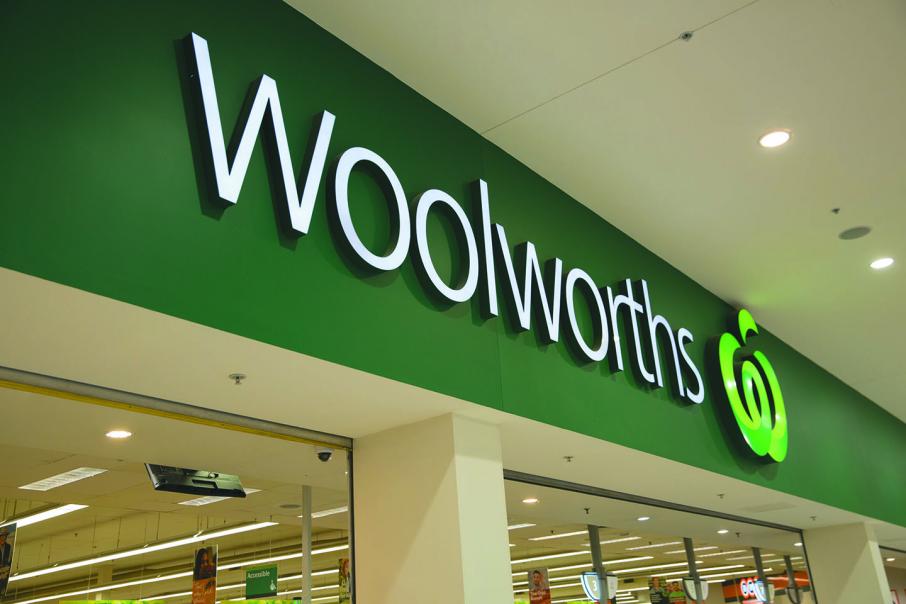 Woolworths has grown to become Western Australia’s largest private sector employer, with 16,400 people on its books, a survey by Business News has found.

The company behind brands such as Big W, Dan Murphy’s, BWS and a national chain of 1,024 supermarkets increased WA employment by 6.8 per cent over the past year.

The WA growth contrasted with the group’s national data, which show employment fell by 2.5 per cent to 169,000 people.

Woolworths is substantially larger than its principal competitor Coles Group, which employs 12,500 people in WA and 113,000 nationally.

Wesfarmers had been ranked as the state’s (and Australia’s) largest private sector employer, but that changed with last year’s divestment of Coles Group.

Wesfarmers is still a very large employer in WA, with 12,789 people across its various operations, which include retailers Bunnings, Kmart and Officeworks and various industrial businesses.

The ranking of Woolworths, Wesfarmers and Coles Group as three of the four biggest private sector employers in WA partly reflects their dominance in areas like groceries, liquor and hardware.

It also reflects retail being one of the biggest employers across WA, and the country as a whole.

Each of these sectors makes a disproportionate contribution to employment in WA, where the total number of jobs increased to 1.36 million in October.

That’s up by 0.8 per cent over the year, compared to 2.4 per cent growth at a national level.

One key difference in employment patterns between WA and the rest of the country is that WA has a much higher proportion of workers in the mining industry (6.7 per cent) compared to 1.8 per cent nationally. 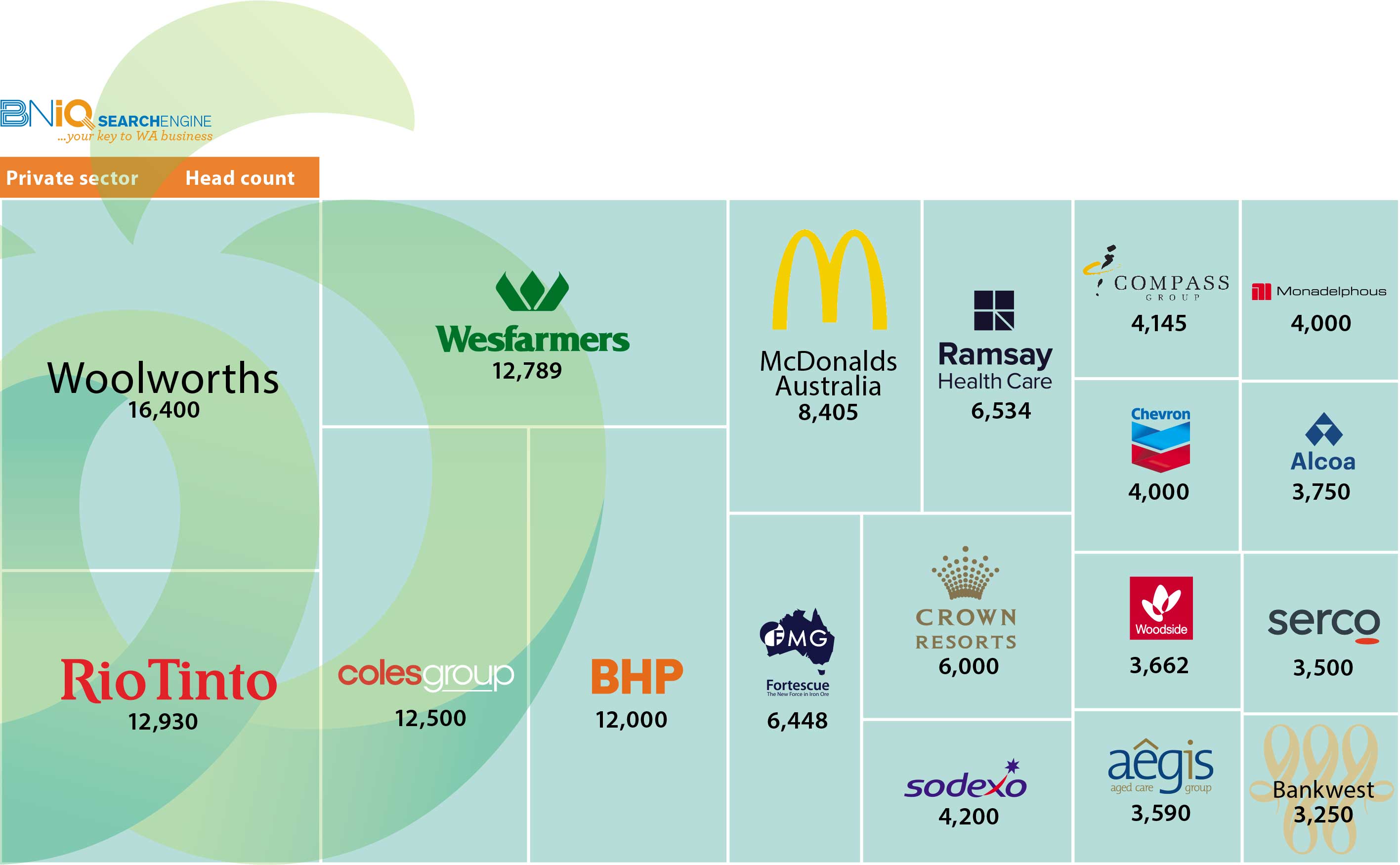 Rio Tinto employs nearly 13,000 people in WA while BHP has 12,000 employees and contractors.

They are part of a growing industry in WA, according to data compiled by the state government’s Department of Mines, Industry Regulation and Safety.

As well as people involved in minerals extraction and processing, this figure includes people employed in mine site infrastructure construction, mine site surveying, transport and catering.

The inclusion of construction workers means the numbers would have received a substantial boost from the big projects currently under way, such as BHP’s South Flank mine, Fortescue Metals Group’s Iron Bridge development and Rio Tinto’s Koodaideri mine.

The iron ore sector remained the state’s largest mining employer, with an average of 60,112 people over the past year.

In addition to Rio and BHP, other big employers in the iron ore sector include Fortescue (6,448 people), CITIC Pacific Mining and Roy Hill Holdings.

Gold mining is another big employer, with 31,422 people, but its dispersed ownership and capital-intensive nature means it does not feature among the biggest employers.

Alumina is also a big employer with 7,395 people.

The two big producers in this sector are Alcoa of Australia (3,750 people) and South32 subsidiary Worsley Alumina.

The state government data on mining sector employment includes people involved in activities such as construction and catering.

The latter group includes companies such as Sodexo Australia and Compass Group, which provide an array of support services such as cleaning, catering, laundry and maintenance at mine site camps.

Sodexo, which services all Rio Tinto camps and most Fortescue camps, employs 4,200 people in WA while Compass employs 4,145.

NRW has grown rapidly over the past year, with its national workforce lifting from about 2,000 in June 2018 to around 6,100 currently.

That includes 2,300 people who joined the group via its recent acquisition of BGC Contracting, and a further 300 through its purchase of RCR Tomlinson’s mining and heat treatment divisions.

Monadelphous has also expanded after winning extra work on mining, LNG and infrastructure projects, primarily in WA and Queensland.

Its national workforce totalled 7,091 people at the end of June.

Like most contractors, its workforce has varied widely in tandem with commodity and investment cycles.

The rapid increase since then, in conjunction with a general tightening in the market for skilled labour, has put pressure on the group, according to managing director Rob Velletri.

In the company’s results briefing earlier this year, he said the group had experienced a disappointing increase in its recordable injury frequency rate.

“Our safety performance was impacted by rapid growth in labour mobilisations in our maintenance business on the back of significant growth in activity, and an increase in subcontractor numbers across the business,” Mr Velletri said.

The group employed 1,149 subcontractors at the end of June, in addition to 5,942 employees.

Mr Velletri said the group had adopted a number of strategies to address these issues, including strengthening subcontractor management, ramping-up safety leadership programs and bolstering management of its maintenance division.

A Monadelphous spokesperson told Business News the company had also increased its graduate and apprentice intake.

“We’ve had a big year at Monadelphous, which has seen our total workforce grow to almost 4,000 here in WA,” the spokesperson said. 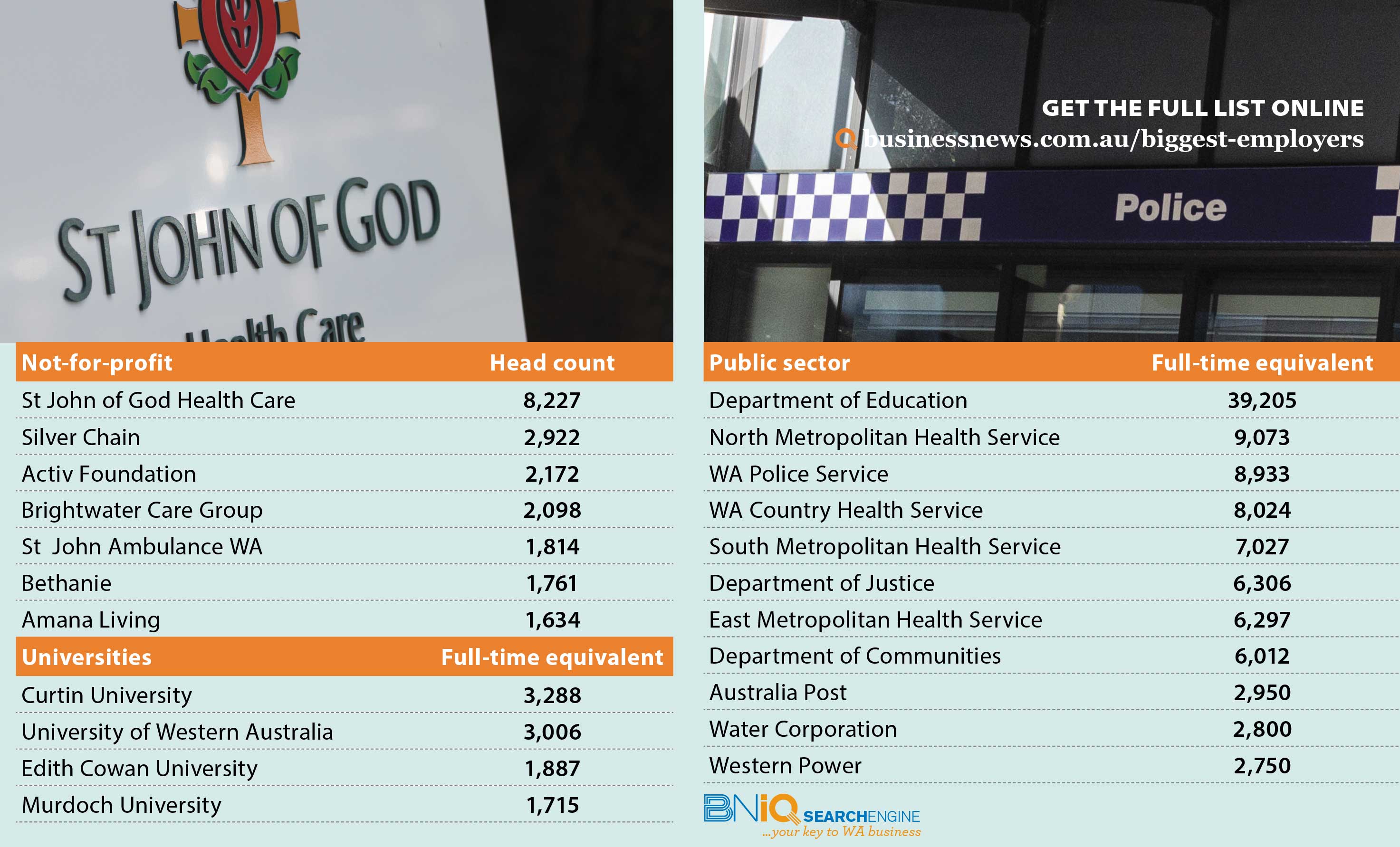 The increased use of contract labour was a trend highlighted by the Department of Mines, Industry Regulation and Safety in its latest analysis.

After stating that WA’s mining industry employed 124,010 people last year, it said this figure should be used with caution, as full-time equivalent (FTE) employment in the same period was 98,634.

The department said a disparity between the two numbers had emerged over the past decade as the uptake of contract employment overtook full-time employment methods.

In June 2009, the disparity between FTE and head count was just 1.8 per cent.

The department said that figure now stood at 25 per cent.

Out of FMG’s global workforce, nearly 1,400 people or 21 per cent of the total are categorised as either labour hire or casual staff.

A similar trend has emerged in the healthcare sector.

The largest employer in this space is the state government, which employs more than 30,000 people (full-time equivalent basis) across its four regional health services (see table).

Its largest campus is at Midland, where it employs 2,236 people at the co-located public and private hospitals.

Midland is now larger than its flagship Subiaco hospital, where employee numbers were steady at 2,077.

Across the SJoG group, there has been a large shift in type of employment.

Since 2015, when it first published a detailed breakdown, the proportion of full-time employees has dropped from 24 per cent to 20 per cent.

Over the same period, part-timers have dropped from 64 per cent to 58 per cent.

The offsetting growth has been in casual employment, which has grown from 12 per cent to 22 per cent of the total workforce.