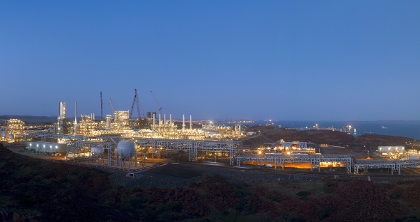 Woodside has commenced production at its Pluto project, near Karratha.

Woodside Petroleum says it will soon be loading first gas for export from its Pluto LNG project, after commencing production at the $14.9 billion operation near Karratha.

Chief executive Peter Coleman said the milestone was a defining moment in the company’s history.

“Pluto cements Woodside’s position as a major supplier of LNG to the Asia-Pacific region and builds on our position as a global leader in upstream oil and gas,” Mr Coleman said in a statement.

“Execution of the Pluto LNG project, from discovery of the gas field in 2005 to first LNG in 2012, demonstrates Woodside’s significant offshore and onshore capabilities.”

The project is expected to add between 17 million and 21 million barrels of oil (mmboe) equivalent to Woodside’s 2012 prodcution.