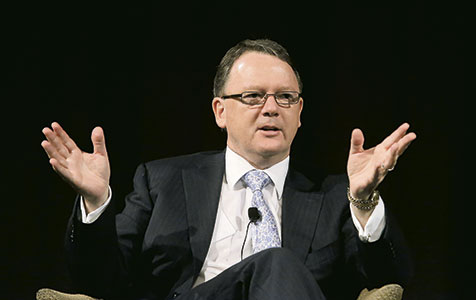 The market was underwhelmed by the news, however, with Woodside’s share price slipping 2.6 per cent today to $34.46.

Woodside will outlay $US2.75 billion ($A2.98 billion) to buy a 13 per cent stake in Wheatstone and a 50 per cent interest in Kitimat, which are being sold by Apache Corporation as part of its move away from non-US assets.

Woodside’s partner in both of the LNG projects will be Chevron.

The “package” deal also includes a 65 per cent stake in the Julimar-Brunello gas field and the Balnaves oil field, both off the Western Australian coast.

Chief executive Peter Coleman said Woodside was paying for a fair price for the assets, with Wheatstone, Julimar and Balnaves all near production, leaving analysts to wonder how much value Woodside can add.

The acquisitions contrast with Woodside’s investment in several early-stage project opportunities across the globe, which are yet to bear fruit, and continued delays in its Australian project portfolio.

The company said the acquisitions would leverage its expertise in LNG production and marketing, offshore oil and gas production, and subsea engineering.

Mr Coleman said the Wheatstone deal would also provide synergies with existing operations and new growth opportunities, but was coy on specifics.

“We need to close the deal first and then we will work through the opportunities,” he said.

“But what it does is it gets us a seat at the table to be talking about things in a very positive and material way, rather than sitting on the outside wondering what conversations are being had about how reserves are going to be developed and so forth.”

Mr Coleman said there would be opportunities to share infrastructure and potential for Woodside to develop its ‘stranded’ gas assets.

“There are opportunities to bring stranded resources in towards the back-end of the project’s life,” he said.

He insisted the purchase was not just an oil price commodity play.

“It’s another arrow in our quiver and gives us really low-risk access into a world-class asset,” Mr Coleman said.

Regarding Kitimat, Woodside said the purchase was a ground-floor entry to the most advanced LNG opportunity in western Canada.

On the politically sensitive Browse floating LNG project, Woodside had expected to make a final investment decision in the second half of 2015 but has postponed that to mid-2016.

Mr Coleman said supply costs in Woodside’s existing business were coming down between 10 per cent and 50 per cent, and he was keen to build those savings into the Browse project.

“The case for pausing and going back is compelling,” he said.

“We don’t want to miss the opportunity of locking in some lower prices into our costs.”

Meanwhile, Apache is expected to continue pursuing sale options for its other international assets, which include several oil and gas fields and three domestic gas plants in Australia.

It has a 52.5 per cent stake in the Coniston oil field development, which is linked to its established Van Gogh oil project.