Woodside Energy and the Australian Space Agency (ASA) have signed a statement of strategic intent and cooperation, which is aimed at promoting technology transfer between the space sector and the oil and gas industry. 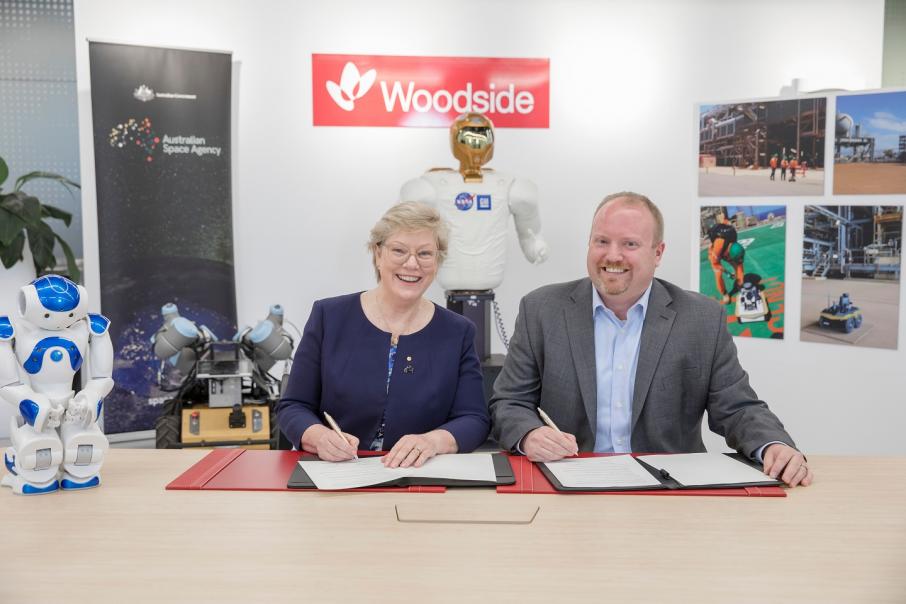 Megan Clark and Jason Crusan sign the agreement in Perth.

Woodside Petroleum and the Australian Space Agency (ASA) have signed a statement of strategic intent and cooperation, which is aimed at promoting technology transfer between the space sector and the oil and gas industry.

The agreement was signed in Perth by ASA head Megan Clark and Woodside vice-president of technology, Jason Crusan.

“By looking outside our industry to the Australian Space Agency, we can accelerate the development of technologies that allow us to safely and efficiently manage assets in remote and harsh environments,” he said.

Mr Coleman said the agreement would help build on the company’s work on remote sensors and data analytics, as well as with NASA on robotics.

“Signing this letter with the Australian Space Agency complements our ongoing engagement with governments, other LNG operators and the tertiary sector to create Australian jobs of the future in remote operating and automation capabilities,” he said.

“We want to ensure the Australian workforce is ready to leverage the opportunities these new technologies can bring - not only to the oil and gas sector, but to the community and the economy more broadly,”

The announcement was also welcomed by Industry, Science and Technology Minister Karen Andrews.

“Woodside is currently expanding capabilities in remote operations and technologies that will enable assets to be operated in remote and extreme environments,” Ms Andrews said.

“Once commercialised, these technologies will not only have the capability to be deployed across different industry sectors but utilised on earth and in space.”

The ASA launched in July, with the federal government allocating $26 million towards establishing the Adelaide-based agency.

Last week, the federal government announced the Mission Control Centre at the ASA’s headquarters would receive $6 million in funding and an additional $6 million will go towards establishing a Space Discovery Centre, also based in Adelaide.