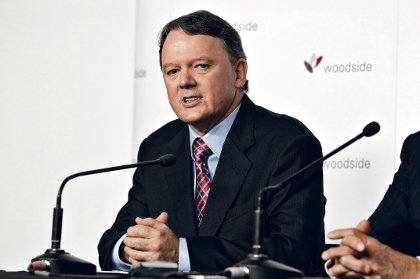 Woodside Petroleum denies it is having doubts about building a gas processing plant in Western Australia's north, following a delay on a decision on the $30 billion liquefied natural gas project in the Browse Basin in WA.

Woodside chief executive Peter Coleman on Monday blamed the delay on a challenging timetable that he said did not leave enough time to complete complex tender negotiations for multi-billion-dollar construction projects.

The oil and gas major - and joint venture partners including Chevron, Shell, BHP Billiton and BP - will apply to the Western Australian government to delay by more than six months the final investment decision that involves an estimated $1.25 billion initial outlay.

They want the decision extended into the the first half of 2013.

The project has divided the community around Broome.

Opponents have waged an ongoing bitter battle with Woodside over LNG project's proposed precinct at James Price Point near Broome in WA's north.

"Due to the size of the project, with some of the information that's required to get some of our tender documents out, we just don't feel we've got adequate time at this point to properly evaluate those documents when they come back in," Mr Coleman told reporters in a teleconference.

"James Price Point is clearly the main game for us, that's where we have literally hundreds of people working on the project."

The tender involves contracts for front-end engineering and design work.

Mr Coleman said Woodside was committed to maintaining a presence in Broome but would not rule out sending the LNG 1000km south to the existing North West Shelf site at Karratha instead, which some analysts believed was a better option.

Mr Coleman said while he was committed to James Price Point he always "kept an eye on the weather" for changes in economic conditions, including costs, that would affect the project's viability.

The plant is yet to be proved commercially viable and it has been reported that a construction camp at Broome and a $100 million road from there to the proposed hub had been delayed.

A court ruled recently that the compulsory acquisition by the WA government of land from native title claimants for the hub was invalid.

Mr Coleman said the joint venture partners had a positive relationship with the government that he believed was sympathetic to the project.

He said he was confident that once in production, LNG would be sold to the Japanese market, along with customers in China, Taiwan and South Korea.

Premier Colin Barnett said Woodside Petroleum's move to delay an investment decision on its Kimberley gas hub was not a significant setback for the $30 billion-plus project.

Mr Barnett, a strong backer of the proposed gas hub at James Price Point, told reporters that at the end of the day it was a private sector project and it was Woodside and its joint venture partners who would have to decide whether to go ahead.

"The fact that a final investment decision is probably delayed by about a year I don't regard as particularly serious or a significant setback," he told reporters today.

Mr Barnett said the Woodside decision was not related to a recent court ruling that found the WA government had incorrectly applied to compulsorily acquire the James Price Point site, nor to protests against the gas hub.

"This is simply (a case of) how do you collectively fund a $30 billion to $40 billion project in a remote location on an entirely greenfields site?" he said.

Mr Barnett said there may be some reorganisation within the joint venture and issues about bringing the cost of the project down.

He noted there had been years of delays in decisions to proceed with projects on the Northwest Shelf off Western Australia.

Mr Barnett suggested the Japanese company Inpex, which plans to build a gas hub in Darwin to process gas from the Ichthys field, should instead build its plant beside Woodside's at James Price Point.

That would save the companies $5 billion each and mean both projects would succeed, he said.

He saw an advantage in a delay to the Browse project, saying if it went ahead alongside the Gorgon and Wheatstone gas projects it could strain the capacity of the WA economy.

"Three at once, I don't think the state could cope with that strain on the workforce or on transport requirements. Indeed, even government would struggle to cope with all the approvals and assessment process."

Environs Kimberley director Martin Pritchard described the decision as "another nail in the coffin" for the project.

"We're calling on the premier (Colin Barnett) to suspend decisions on the project and not waste $120 million of taxpayers' money on the road that's planned to the proposed gas hub, because it looks like it's going to the Pilbara," he said.

"We also want certainty for Broome. The longer an announcement on a decision to go to the Pilbara is delayed, the more angst it creates for our community."

Mr Pritchard said Woodside should think about its corporate social responsibility, as well as its share price.

Greens spokeswoman Rachel Siewert said the delay provided time for Woodside and its joint venture partners to find an alternative site as a result of so much opposition to the project.

"The time has come to find an alternative location for the processing hub, one that does not carry the same cultural and environmental threats," she said.

Ms Siewert said the Pilbara should be considered for the hub, rather than the Kimberley.

"With the Pilbara's existing infrastructure and experience with major projects, it is a much more sensible and responsible option than industrialising the Kimberley," she said.