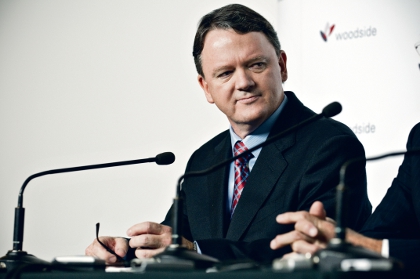 Woodside managing director Peter Coleman has called for a broader debate on productivity issues, saying there has been too much focus on blue collar wage rates and not enough on costs the gas industry imposes upon itself.

Speaking at an APPEA seminar at the University of WA, Mr Coleman warned that the LNG industry needed to ensure there were no more cost blowouts on big projects.

"The best thing we can do now, now that we're in the situation we're are in, is make sure these projects deliver on their revised schedules and revised costs,” he said.

"That will then give people that ongoing confidence that they can come back to Australia."

However, he indicated that some investors may not reinvest in Australian projects.

“We’re starting to get some signals from those investors that have sophistication and optionality in their (project) portfolio, they’re sending us a very clear signal: ‘you’re not cost competitive today and that next expansion is not guaranteed’,” Mr Coleman said.

“What they’re doing is starting to send signals that investment in Australia is becoming less competitive compared to their other choices.”

He said the assumption that investment would eventually come in time was not always the case.

“Our Browse project for example; the field was discovered 40 years ago. Sunrise was discovered at about the same time, so these things can sit for a long period of time.

“It’s not just simply a matter of waiting a couple of years and (investors) will come back. If they leave they may not come back for a long period of time.”

Mr Coleman said about 30 per cent of Woodside’s costs were attributed to white collar workers, and he attributed much of this to inefficient regulation and internally-driven processes.

He remarked on the inefficient erection of scaffolding and “phenomenal” amount of rework that was needed.

Mr Coleman said a major issue for the industry was the size and complexity of its multi-billion dollar projects.

He noted that 6 of the 7 LNG projects currently under construction in Australia were being developed by companies that have never built or operated a LNG plant before.

"Not only are we seeing the mega projects over $10 billion increase and go out in time, that's exacerbated by establishing a new operation in Australia and working in a new technology base," Mr Coleman said.

"The challenge for industry, as we've got a number of new players coming in, is how they're able to manage their way through that."

Mr Coleman stated that Woodside would not work with companies that were poaching staff rather than investing in training and development.

He noted today that one company poached “17 of my operators in Karratha in one month”.

“There are operators out there who are fundamentally committed to developing people.

“There are others than have chosen a different path; we are not going to joint venture with them at any time soon.”

“Look around Perth and you will see about 40 oil and gas companies overseeing about $90 billion worth of investment in oil and gas…that is truly rewarding,” he said.

“In short, nowhere else is there such a concentration of talent across a large range of LNG technologies.”

He said the increased activity the sector had brought to WA debunked two myths.

“Myth number one; that our industry is stifling the growth of other sectors by crowding out the best knowledge, and myth number two, that we’re a low value adding industry that doesn’t support Australia’s aspiration of being an innovative high-skilled nation.”