Woodside Petroleum has donated $1 million to the Harry Perkins Institute of Medical Research, while 100 Woodside employees have raised almost $280,000 more through the Ride to Conquer Cancer. 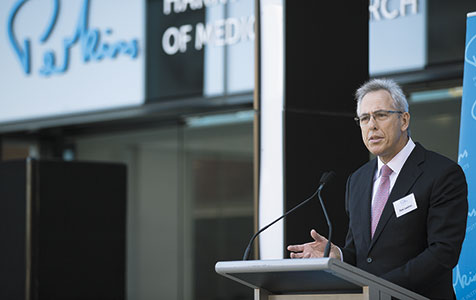 Woodside Petroleum has donated $1 million to the Harry Perkins Institute of Medical Research, while 100 Woodside employees have raised almost $280,000 more through the Ride to Conquer Cancer.

Perkins will use the $1 million from Woodside to establish a Fellowship in Cancer Research program.

TO THE HARRY PERKINS INSTITUTE OF MEDICAL RESEARCH

Woodside and the Harry Perkins Institute of Medical Research have today announced a partnership under which Woodside will support the institute to establish a Fellowship in Cancer Research.

The $1 million announcement comes on the eve of the Ride to Conquer Cancer, which involves more than 100 Woodside staff who have raised close to an additional $280,000 for cancer research at the Perkins Institute.

“Woodside’s support of cancer research had been inspired by the dedication and commitment of our employees and their passion to make a difference,” he said.

In thanking Woodside, Perkins Institute director Peter Leedman said the support would enable the Perkins to attract an outstanding researcher whose projects would have the greatest potential to yield valuable findings in an area of cancer.

“While the survival rates for many cancers have improved because of medical research, there are some cancers for which the prognosis is poor and it is these cancers that are the focus of our research at the Perkins,” Professor Leedman said.

“We believe this culture will deliver better patient outcomes faster,” he said.

“We now have world’s best research facilities and equipment right here in WA.  I am hoping that the support from Woodside will inspire other companies and individuals to support the Perkins so we can continue to build on our foundation of world’s bests scientists.”

The Perkins Institute has two new state-of-the-art research facilities – one at the QEII Medical Centre, Nedlands and the other at the recently opened Fiona Stanley Hospital in Murdoch.

The Woodside Ride to Conquer Cancer Team Captain, Dave Harwood, challenged his team members on the team’s fundraising page saying: “We are here because we know too many people who have been affected by cancer. It touches everyone. But by riding in this event we are doing something about it. We are rolling closer and closer to the end of cancer.”