Visitor movements at 2015 Fringe World events will be analysed to measure event performance based on the audience engagement, with the help of technology developed by a local company. 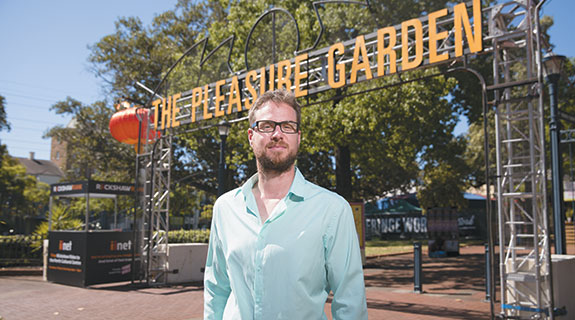 Visitor movements at 2015 Fringe World events will be analysed to measure event performance based on the audience engagement, with the help of technology developed by a local company.

Inhouse Group has tailored its signature technology, iinsights, to collect and measure data of visitors to Fringe World central locations The Pleasure Centre and the Cultural Centre.

Sensors within the areas use wireless technology to tap into devices, usually smartphones, to collect data during the time visitors spend at venues.

No personal data is collected and the technology cannot identify an individual, as it only uses the device’s unique identifier.

The technology can collect data across four areas: potential metrics measure the number of people in the area; engagement metrics collects data on dwell time and paths of visitors; conversion metrics analyses the transition of a passer-by to a visitor in a store or paying customer; and loyalty metrics focus on frequency and repeat visitation.

Inhouse founder and chief executive Clinton House said that, before the technology had been developed, measuring this type of information was almost impossible.

“The product is about providing information to stakeholders, businesses or governments that have never had access to that type of information before,” Mr House told Business News.

“It has all been a bit wishy washy up until now.”

The technology feeds to the iinsights system and is analysed and presented on a dashboard for clients, with a minimum of 19 analytics and countless additional ways to look at the data.

Local governments, retailers and other large events have been using the iinsights technology in recent years.

The technology was developed as a loyalty-measuring app in 2009, and has only recently reached product maturity in its current form.

Mr House said online retailers previously had the advantage over those offline, because they had Google Analytics to measure visitors’ behaviour.

Fringe World has previously measured attendance and visitor response through ticket sales, surveys and manual data collecting, among other measures.

However, until this year it has not been straightforward to measure attendance at free events and visitors to the general areas.

Mr House said 2015 was a first step for Fringe World to provide baseline data to analyse against future years.

“I think that once they see this data and start making decisions based on this data they need a comparative for next year,” he said.

Mr House said the sensor-based technology would allow festival organisers to measure the return on stakeholder investment by providing the most accurate data to festival partners.

“At a high level, Fringe World requires better data to better support those partners and … different ways for the partners to engage with visitors,” he said.

Next year would involve approaching other stakeholders, Mr House said, including retailers and cafes that hosted or surrounded Fringe World events, to collect data at those locations.

While the technology is new for Fringe World, it has proved successful for other major events in Perth, including at the 2014 Perth Royal Show.