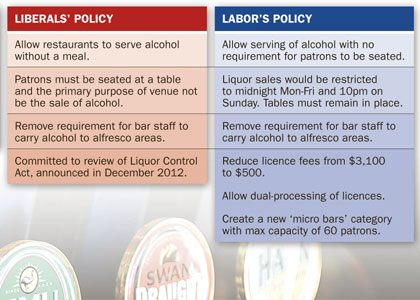 WESTERN Australia’s liquor laws are slated to be relaxed regardless of which party wins the state election.

Opposition leader Mark McGowan said that, if Labor won the poll on Saturday, restaurants would be allowed to serve patrons alcohol regardless of whether they were having a meal or sitting at a table.

A stipulation would be placed on the outlet, requiring it to keep the dining furniture ‘in its ordinary place’ - presumably to prevent a nightclub-style dance floor.

It would be a significant change to the law, which prevents restaurateurs from breaking into the liquor cabinet for a guest unless the guest is both seated at a table and having a meal.

“The requirement to be seated in a restaurant is the last key distinction between restaurant and bar licences,” Mr Woods said in a statement.

“Removing the seating requirement means all bars and restaurants operate on the same liquor-service basis.”

His comments came after he endorsed Mr Barnett’s pledge in February to remove the requirement for guests wanting a glass of wine to also be having a meal.

But Labor’s policy would restrict the sale of alcohol in restaurants to end at midnight Monday to Friday and 10pm on Sundays - a restriction not included in the Liberal Party’s policy.

In making his pledge to cut red tape on liquor sales in February, Mr Barnett said that while some restrictions would be removed, the Liberals would keep the requirement for guests to be seated.

The Liberals’ proposed policy is similar to the current special licences, which restaurants can apply for to serve alcohol without a meal.

The special licence has no trading hour restrictions and will effectively become an automatic licence for restaurants under a Liberal government.

Both parties have pledged to do away with the requirement for bar staff to carry alcohol to a patron’s table if they are seated in an alfresco area - that rule was unintentionally put in place to stop patrons taking alcohol elsewhere to be consumed.

Venues at the mercy of that rule include Mount Lawley’s Flying Scotsman Bar and the Belgian Beer Cafe on Murray Street.

Mr McGowan has also pledged to reduce licence fees from the $3,100 to $500 and allow for the processing of licence applications by local government and the Department of Racing, Gaming and Liquor simultaneously -both were commitments he announced a year ago.

Labor also wants to establish a new class of licence called ‘micro bars’, with a maximum capacity of 60 patrons.

Given that the small-bar licence system introduced under the last Labor government has no minimum restriction, it’s unclear what benefits a micro licence would have.