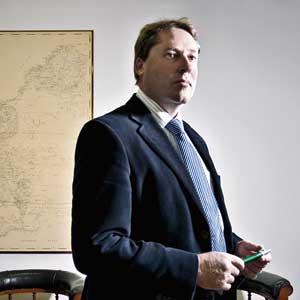 KATANNING farmer Rick Wilson isn't afraid of going against the mob - a trait that should stand him in good stead as the new head of the Pastoralists and Graziers Association western grain growers committee.

After serving a long apprenticeship under former chair Leon Bradley - one of the industry's most outspoken critics of the AWB-controlled wheat export single desk - Mr Wilson has stepped up to continue the momentum of grain market reform.

As was the case with his predecessor, Mr Wilson has at times been a lone voice championing free markets in an industry steeped in tradition.

"In 2000, the [National Competition Policy review] produced a report recommending the wheat market be deregulated; it was a draft report," Mr Wilson told WA Business News.

"I've never been afraid to go against the mob because I had absolute faith that we were right.

"The AWB single desk was brought in after the Second World War and for two or three generations of farmers that's the only thing they'd ever known. And there was this fear of the unknown, helped along by a great deal of propaganda from the AWB, which was protecting what was a very lucrative statutory monopoly."

At 43 years of age, Mr Wilson is part of a younger leadership group emerging within the agricultural sector.

Mr Wilson, together with the likes of 45-year-old Agriculture Minister Terry Redman, represents a new generation with an agenda for reform.

A fourth-generation mixed grain and sheep farmer, Mr Wilson has drawn on his personal experiences, and mistakes, to form his own view of the world.

"My father died when I was very young and my brother Allan and I were thrown into the management role on our farming property virtually the day we left school," he says

"I think what makes us different to a lot of farming operations is we didn't come home from the farm and have dad telling us from day one that you need to have a single desk scheme to market your wheat.

"We we're completely open-minded and decided that, though these statutory marketing institutions had been in place for generations, that didn't make them right and it didn't make them the best way for our business to market its produce."

Mr Wilson left the family farm for a time to complete a bachelor of business, and did a brief stint working in the finance industry.

But it wasn't long before he moved back to Katanning and it was around then, in his mid-20s, that he was first drawn to agripolitics.

Of the various farming lobby groups, Mr Wilson indentified most with the free market, minimal government involvement ideals of the PGA, whose members were among the largest farming landholders in the state.

He joined the PGA grains committee in 1997 and became vice-chairman 2001.

"I could see the agricultural industry was very moribund. These statutory marketing authorities had been in place for many years and they were holding the industry back," Mr Wilson says.

"As a young participant in the industry I was very keen to open the industry up to new ideas and new innovation, new investment, which is very much what has happened in the wheat market.

"I was drawn towards the PGA because it had a very strong stance on free market operations."

Now approaching the one-year anniversary of the wheat export market deregulation, Mr Wilson feels his stance on wheat deregulation, and the PGA's fight, has been vindicated.

"We always felt that once deregulation took place the heat would drop completely out of the issue; people don't really care, they just got on with the business of growing and marketing their grain.

"As we always said, the option is still there for growers to pool their wheat and deal with AWB if they so choose; there's a plethora of other marketing options available."

Mr Wilson has made resolving the current crisis in WA's grain transport and handling system, and encouraging greater competition in that space, one of his priorities, calling for a comprehensive strategic plan for upgrading the network.

"The issues that have come up from the deregulation haven't been to do with growers and their marketing, they've got to do with the handling and logistics," he says.

"We've got 22 registered wheat exporters now and they all want to get their wheat on a boat and into the market as soon as possible after harvest, and that's put enormous pressure on the rail and handling network.

"We want to see a well funded, well resourced strategic plan and then want to be first in queue for the next round of infrastructure grants."

But notwithstanding the challenges ahead, Mr Wilson believes now is one of the most exciting times for the agricultural industry.

I'm absolutely in awe of Leon Bradley and what he's achieved over the years. I've served a long apprenticeship and I hope I've learned some lessons from Leon about the intellectual rigour that you need to apply, and the integrity.

On deregulation of wheat export markets...

In the initial stages, in all those industries - the wool industry, the lamb industry and the grain industry - people were very much wedded to the status quo. But in every case, as soon as deregulation took place and the benefits started to flow, all the heat and the politics were removed from the industry overnight.

The new state minister, Terry Redman, has been an absolute breath of fresh air; he's deregulated coarse grains, got rid of the Grain Licensing Authority, lifted moratorium on GM, all in the first six months. He's actually made decisions and done things.

On what he would like his legacy as chairman to be ...

I'd like to see: a very competitive grain industry in WA, a profitable industry where growers are well paid for what they produce; a wide range of handlers and marketers bidding for their grain; and a bare minimum of government interference in our industry.