Why resources juniors are doing it tough

Listed companies and their advisers will need to be nimble to adapt to the changing dynamics of project funding. 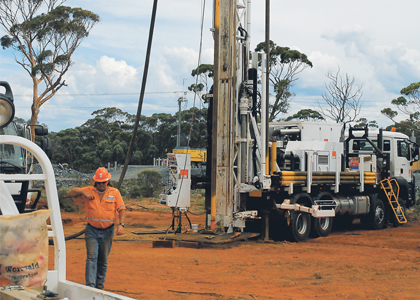 Listed companies and their advisers will need to be nimble to adapt to the changing dynamics of project funding.

MANY junior listed companies, particularly in the resources sector, are looking towards the New Year with the same sense of dread as in the latter half of 2008.

Some face the triple headwinds of dwindling cash balances, rising domestic costs and declining prices (particularly in Australian dollar terms) for their commodities.

Several have watched years of hard work evaporate, with share prices back to 2009 levels. Many attract little better than private company multiples on their earnings. Some trade below net tangible assets, while a few are not even credited with their cash backing.

The financial community in Perth historically has shown a strong vested interest in the capacity of the public markets to supply risk capital to early stage resources ventures on cost-competitive terms.

In a sense, the ASX has performed this role in lieu of the kind of developed venture capital markets one sees elsewhere, prompting some to compare West Perth with California's Silicon Valley.

That analogy is attractive, yet while Silicon Valley continues to spawn a seemingly endless population of internet billionaires, the junior listed resources sector is far less healthy. The business model, which until recently brought together capital, projects and management teams so efficiently, is showing signs of stress.

There are two related consequences of this market failure, which in my view represent a real threat to productivity and innovation in the energy and resources sector over the longer term.

First, the cost of raising equity capital is rising steeply. That cost comprises both a fee element and a discount element. As directors of junior companies will know, fees to underwriters and brokers will commonly run to higher than 7 per cent on an all-in basis (higher if ancillary out of pockets such as legal fees, PR consultant fees, and the expense of holding road-shows are included).

The discount to market price on an equity raising can be even more punitive, however. With an ever-shallower pool of capital to access, the discount brokers must offer to entice risk-taking by their clients is blowing out.

The smaller the company, the more vicious this dynamic, as can be seen from the chart (above right) which illustrates the average discounts for placements between 2010 and 2012 (YTD) based on the market capitalisation of the issuer.

So, a junior company outside the ASX300 might expect an all-in cost (fee plus discount) of well in excess of 25 per cent of the funds raised in a placement. Expensive money, indeed.

The second consequence is less measurable, but in my view more profound. With deepening discounts comes greater dilution to the extant shareholder base, which more often than not will include the founder and key management.

What we are witnessing, then, is the disenfranchisement of the entrepreneur at a much earlier stage of the company's development than would otherwise be the case; they have been supplanted, in a sense, by a different class of disinterested shareholder. That, in turn, is doing nothing to encourage the kind of entrepreneurial spirit that created many of the more recent Perth success stories.

The ASX is, I believe, aware of the challenges it faces and to its credit is taking what steps it can to remain competitive. It has released fresh guidance to address perceived uncertainty in the operation of its continuous disclosure rules, clarified rules regarding the reporting of mineral reserves and resources, and introduced a more flexible capital raising regime for junior companies.

Most recently, it has supported technical innovation in the form of the proposed on-mar-ket bookbuild mechanism - ASX BookBuild: Bringing efficiency, fairness and transparency to the primary equity market: Consultation Paper (September 2012).

This mechanism, if implemented, will provide an alternative to existing, largely opaque bookbuild processes, through an on-market and automated system.

The real-time, discoverable price and allocation offered under the ASX BookBuild would allow participants to make value determinations with the confidence that all participants are on a level playing field. In turn, this should increase competitive tension and lower costs (both fees and discounts).

However, creditable as those initiatives may be, the ASX faces many threats. Some, such as the growth in high-frequency trading, the arrival of a second exchange in Chi-X, and the increased use of dark pools, come from within the existing system. But there are also at least three external threats.

The first is from the highly developed but essentially private bond markets, both for rated debt instruments and 'high yield' (sub-investment grade) bonds, primarily in the US. While traditionally only available to cash-generative companies, we have seen several Perth-headquartered companies access this market astutely in recent years to finance development, supplanting equity and/or project finance (a space from which many commercial lenders have effectively withdrawn). Examples include issues of subordinated notes by Fortescue Metals Group and Atlantic for the Windimurra Vanadium project.

The second is from private equity. Backed by longer term (often more than 10-year) money, the PE funds have the ability to step in when the public markets are dysfunctional - usually at times of peak stress - and, being outside the public glare, can often offer more attractive and enduring compensation structures for the entrepreneur. The timing of the arrival of a number of foreign PE firms such as Denham Capital in Perth is no coincidence.

The third is from what I will call strategic equity, sources of equity that seek out benefits over and above the expected earnings stream from the business (such as security over offtake). Resource investment by foreign state-owned enterprises and sovereign wealth funds may fall into this category.

Views differ as to its desirability, but from an ASX perspective, in my view the recent number of control-block placements to strategic shareholders is an unwelcome development as it is likely to dampen liquidity, crimp corporate appeal and, over the longer term, impede the efficient working of the market.

Of course, what is a threat to one player is an opportunity to another; so we expect to see more innovation, not less, from alternative (offshore) capital markets, and both more aggression and more flexibility on the part of private and strategic equity.

Listed companies and those who advise them will need to be nimble to adapt to these changing dynamics.