Award-winning author Anna Funder worries that the infamous East German Stasi have not been fully exposed. 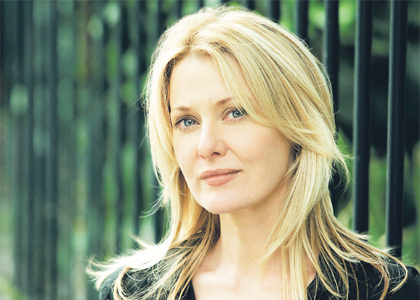 JOURNALISTIC: Anna Funder tracked down the various victims and perpetrators from those darks days before the Berlin Wall fell.

Award-winning author Anna Funder worries that the infamous East German Stasi have not been fully exposed.

STASILAND, which documents the lives of those inside and outside East Germany’s internal security apparatus, is one of my favourite books, so when its award-winning author, Anna Funder, was making the closing address at the Perth Writers Festival it was a must-see for me.

Ms Funder has gained more fame for her 2012 Miles Franklin Award-winning novel All That I Am. But it was her journalistic approach to Stasiland which really captivated me when I stumbled on this book about a decade ago.

In it she tracks down various victims and perpetrators from those darks days before the Berlin Wall fell. Part of the story is her first-person adventures in finding these people, with secret meetings and cryptic clues.

While many of the stories are almost comic there is a very sinister undertone.

Even more than a decade after the regime had fallen, many people still feared the secret police who had kept dossiers on millions of people and even kept their ‘smell’ in jars, using items of intimate apparel or material obtained from the very seat they were on during interrogation.

As much as they are an anachronism, the Stasi don’t like being mocked by history. In fact, one of Ms Funder’s reasons for writing the book was the dearth of material from the era.

Her concern was that one of the nastiest secret police organisations might just be forgotten because people just wanted to get on with their lives. Germany, after all, has spent a bit of its recent past navel gazing its own troubled past. Perhaps it didn’t want to do that again.

The Australian author might have broken new ground but the complicated machinations of the Stasi were given another international airing in 2006 when German film Lives of Others made its debut to much acclaim.

A film about the covert surveillance of a leading artist and writer in East Berlin, it could well have taken its inspiration from Stasiland and certainly makes a nice accompaniment. Even the collection of smells gets an airing.

Despite the sophistication and, at the time, awesome power of the Stasi, it is easy to laugh them away as merely the result of totalitarianism, rather than being the instigators and maintainers of it. It is like the old excuse: that they were taking orders, rather than making them.

However, the reason I felt compelled to reflect on Ms Funder’s speech was because she was not just referring to the past when Berlin was surrounded by a wall and people were shot trying to get over it.

Take, for instance, the German publicity tour for her book, which was published in 2003.

She told the disturbing story of being confronted in every venue by former Stasi men occupying the first two rows of seats, wearing their distinctive clothes and wielding pads that were used to take copious amounts of notes.

Only when these men left the venue, collectively, did others in the audience feel comfortable enough to ask questions or tell their own stories from that period.

(As an aside, I was thankful such inhibitions were not present at the University of WA’s Octagon Theatre when Ms Funder took questions from the floor. One audience member, which I am led to believe was former diplomat Sue Boyd, said she returned to East Germany, where she had been stationed, to view her file which was both extensive and disturbingly accurate.)

Ms Funder said enemies of the book even took out defamation actions against it and, in Germany, managed to have a line removed from the text that suggested they had still been hounding their former victims.

To underscore the irony of that, Ms Funder wants the text restored and then blacked out in reprints.

She is worried the Stasi have not really faced the exposure they ought to have in that country and are regrouping to operate in the contemporary political system.

She admitted this concern had its own moments of paranoia-driven humour. After learning of their defamation actions while back in Australia, she found the water turned off in her house. Her instant reaction, she said, was disbelief that their reach extended so far.

That might be a joke but I don’t imagine that people who terrorised others for a living would give up the habit too easily, especially when they know how effective it can be.

Germany is a global economic powerhouse and the only thing saving Europe at the moment. The rest of the world does not need a bunch of sinister people having any form of power, no matter how small, in such an important nation.

As a break with tradition, rather than more lectures, I would like to offer some of my favourite books that have offered me inspiration through a wonderful mix of worthy journalistic pursuit and great writing. If you stumble over any of these I’m sure you will be both entertained and informed.

These books below are by journalists and, roughly, in order of publication, the most recent first.

• The Big Short by Michael Lewis

• Above the Law by Ross Coulthart and Duncan McNab

• Albert Speer, His Battle with Truth by Gitta Sereny

• The Rise and Fall of Alan Bond by Paul Barry

Some speak for themselves, but I was particularly taken with Seven Deadly Sins by Irish sports reporter Walsh. He was a big fan of the Tour de France cycling race but did not believe Lance Armstrong was drug free. Being a public critic was not popular but he never stopped.

Michael Lewis is worth reading on almost every case. Another notable book of his is Boomerang: Travels in the New Third World, a collection of essays on post-GFC Europe.

I also recently consumed an audio book of Ross Coulthart and Duncan McNab’s Above the Law: How outlaw motorcycle gangs became the world’s biggest criminal empire. Another well researched piece of work, which digs down deeply on bikie gang activity.

I have two books in here by journalists best known for their work on the ABC’s Four Corners program. While the ABC can be left leaning, Barry’s forensic expose of Alan Bond is terrific and Masters, oddly, revealed the human being behind powerful shock jock Alan Jones.

A Bright Shining Lie is about Vietnam and contends that the war might have gone differently for the US if it had rethought its strategy and looked at what actually worked on the ground.

Gitta Sereny’s book on Adolf Hitler’s industrial manager and architect Albert Speer is long but worth the challenge. It is interrogation in slow motion.

24 Days is about the exposure of the Enron scandal by two Wall Street Journal reporters who felt the numbers did not add up.