A year after Wheelchair Sports Association WA was staring down the barrel of a $500,000 deficit, the organisation is advancing plans to secure a sustainable income. 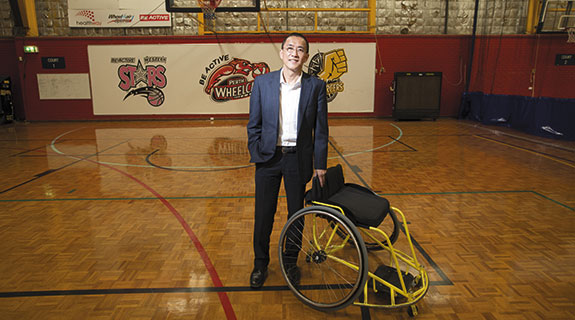 A year after Wheelchair Sports Association WA was staring down the barrel of a $500,000 deficit, the organisation is advancing plans to secure a sustainable income.

Wheelchair Sports Association WA is undertaking a strategic overhaul of its operations, focused on developing a revenue-led structure that will ensure its future over the long term.

The association currently helps 1,300 people annually, and plans to expand its services to many more of the 60,000 Western Australians who have a physical disability are on hold until it secures a sustainable income.

However, with only $75,000 in government grants and a decade of steadily declining revenue from its traditional fundraising activity of telemarketing, Mr Yong said putting in place a new revenue-led structure was proving a long-term challenge.

Mr Yong, who has been at the helm for the past two and a half years, said accounting practices meant the slide in revenue trend had not been immediately apparent, but the resulting situation was undeniably dire.

“We started the budget year 2014-15 looking like we were going to lose half a million dollars,” he said.

“We finished up the year making a surplus of just under $300,000, so we took it to a solid turnaround, and that was from instigating new things.” 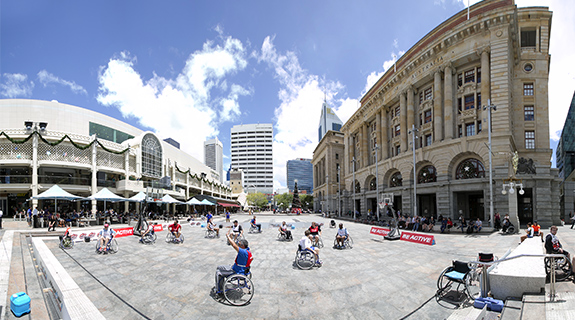 A government versus opposition game featuring local politicians was a highlight at the Wheelchair Challenge in the City held last month at Forrest Chase. Photo: Travis Hayto

The association commissioned research from the University of Western Australia on people in WA with a disability to better understand its market. It then set about improving its marketing, stepped up its mail appeals, received a large bequest, and successfully applied for several new grants, including from Telethon.

It also came up with new fundraising activities that appeal to a sense of novelty while improving awareness; for example the Corporate Wheelchair Challenge, which raised $110,000 last year, and the Community Wheelchair Challenge to be launched in 2016.

“People want to give for a cause they believe in, but they also want an experience and they want to have a bit of fun, hence things like the ice bucket challenge,” Mr Yong said.

He said while its research had revealed that up to 60,000 people in WA were living with a disability, and accessing recreation and sports 30 per cent less than able-bodied people, the association could not yet afford to grow its services outside of its core membership in Perth.

“It doesn’t take a rocket scientist to say if I’m going to execute a strategy that looks to try and support many more of that 30,000 to 60,000 people out there who are not currently getting our support and charge them $50 and it costs us $4,500 (per person), we’ll go broke very quickly,” Mr Yong said.

While the association does ask members who can afford to pay more to do so, Mr Yong said there was a strong correlation between disability and social disadvantage, particularly for those with disabilities that restricted their ability to earn an income.

“When you are marginalised, those problems are compounded because there is less opportunity.”

The association will miss its $1 million target by $100,000 this financial year, but Mr Yong is optimistic.

“We might, like last year, get lucky with the generosity of people and a lot of hard work, knocking on doors and asking people to take on the (wheelchair) challenges,” Mr Yong said.