The reality on future iron ore prices may be somewhere in the middle of the most dire predictions and those of the eternal optimists. 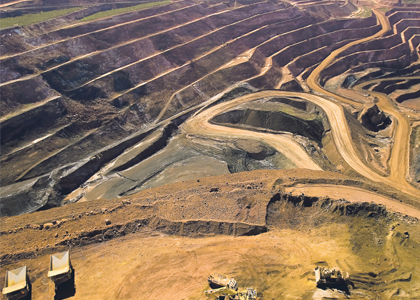 FLUCTUATION: Rio Tinto has warned that iron ore prices could fall to about $100/tonne by the end of the year. Photo: Christian Sprogoe

The reality on future iron ore prices may be somewhere in the middle of the most dire predictions and those of the eternal optimists.

IT is easy to imagine that Rio Tinto’s head of economics, Vivek Tulpule, was playing a marketing game when he warned last week that the iron ore price could fall from its current level of $US150 a tonne to “about $US100 a tonne” by the end of the year.

After all, big companies with billions of dollars invested in a business are known to issue dire warnings about the outlook for demand and price as part of a strategy to warn off rivals, and put a jolly good scare into potential investors in new projects and bankers to those projects.

Gina Rinehart, for one, would not have welcomed Mr Tulpule’s iron ore price predictions as she finalises her banking arrangements for the proposed $10 billion Roy Hill mine, and neither would her South Korean partners or banking syndicate, which will have called for a fresh check of likely iron ore prices over the next few years when their risk is greatest.

It is also easy to imagine that the chief executive of China’s biggest steel maker, Baosteel, was playing a marketing game when he warned last week that demand growth for steel in China would be a lowly 3 per cent this year, much the same as last, as a result of slowing construction activity.

Annual growth of 3 per cent for steel is a possible pointer to lower iron ore prices, which is undoubtedly what He Wenbo, the Baosteel boss would like.

But, if Mr Tulpule and He Wenbo are not playing games, and the market intelligence gathered by Rio Tinto and Baosteel is correct, then perhaps we are looking at a 33 per cent fall in the iron ore price to around $US100/t by Christmas, a result that would be very damaging to most iron ore miners.

Top of that list today is the Tasmanian miner Grange Resources, which operates the deep, old, and high-cost Savage River mine in that state’s north-west. Last year, Savage River produced iron ore at a cash cost of $A106.08/t, roughly the same as 2011 when the cash cost was $A109.43/t.

There are two critical points in those Grange results. Firstly, the cash-cost per tonne is a misleading number because it does not include a multitude of other costs and charges. Secondly, Savage River is the original magnetite iron ore mine in Australia, being followed in Western Australia by Gindalbie’s Karara project near Geraldton and the Sino Iron project near Karratha.

Both Karara and Sino have been promoted as producers of a premium quality, premium-priced iron product, but neither is yet to reveal a likely cost per tonne, or how much of the steep price fall tipped for direct shipping ore tipped by Rio Tinto will flow into the magnetite price - which it will.

As for Grange, which has already mothballed its proposed Southdown magnetite mine for a site near Albany, the outlook is grim, with investment banks tipping that the company is about to start a long run of losses.

“I think a lot of shareholders in these highly-leveraged mines will lose everything,” Mr Xie said. “In the end, creditors will take over these projects.”

While it is the high-cost magnetite miners who face the toughest trading conditions and tightest profit margins in the years ahead, the direct shipping miners will not be far behind if the $US100/t price tip is correct.

Fortescue Metals Group, for example, last reported a cash cost of $US50/t and confirmed there was a further $US18/t in operating costs, taking the total cost to $US68/t.

On balance, most of the direct shipping ore miners can survive at $US100/t, but their margins will be squeezed and funding for new projects will be hard to find as bankers and investors ask hard questions about profits.

They will ask even harder questions about Mr Xie’s short-term iron ore price forecast of $US60/t before recovery to $US80/t, and a long-range forecast from Goldman Sachs of $US88/t.

MRS Rinehart, as everybody knows, is more than capable of defending herself, but even I was slightly surprised when she was omitted from a list compiled by BRW magazine of Australia’s richest women.

The problem was not that she lacks the cash - Forbes magazine puts her at $US17 billion, equal 36th richest person in the world.

BRW s view was that Mrs Rinehart had not made the money herself, dropping out because of an ‘inherited money’ filter.

Mrs Rinehart, despite her protests, did inherit enough to kick-start her business. But it’s equally true to say that she has since created far more wealth than Wyllie and Holmes a Court combined.

AS a regular contributor to rich list compilation projects, I know that there is only one thing worse for a wealthy person being included on a list, and that’s being taken off - a position shown in the protests of Prince Alwaleed bin Talal, who as downgraded to a mere $US20 billion by Forbes, not the $28 billion

he claims - though what’s $US8 billion between friends?

“There are some men who gain from their wealth only the fear of losing it.”
Antoine Rivaroli