What about the national interest?

It may have been ugly, but the bitterness that dominated federal parliament this year has set the tone for 2013. 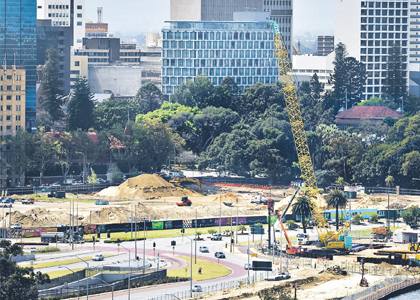 DEBT: The state opposition is sure to make debt an issue ahead of next year’s election, pointing to projects such as Elizabeth Quay as examples of ‘over-reach’. Photo: Grant Currall

It may have been ugly, but the bitterness that dominated federal parliament this year has set the tone for 2013.

MANY Australians breathed a collective sigh of relief when federal parliament adjourned after a bruising year in the national capital. It meant no more ugly slanging matches masquerading as debate on the nightly TV news.

Unfortunately the national interest, as envisaged by the need for long-term policies to meet the challenges of the next 50 years, hardly got a look in.

Both Prime Minister Julia Gillard and opposition leader Tony Abbott were prominent student politicians - she at Melbourne University and he at Sydney University. At times it appeared neither realised they had graduated, let alone held the hopes and aspirations of 22 million Australians in their hands.

The prime minister illustrated this earlier in the year when she held out the carrot of the speaker’s position to the then disaffected Liberal MP from Queensland, Peter Slipper. Mr Slipper was on the verge of losing his Liberal endorsement, and Labor was seeking to bolster its precarious numbers position in the House of Representatives.

Labor’s Harry Jenkins, who had been in the speaker’s chair, took one for the team. He said he wanted to get more involved in ‘policy formulation’ and was happy to make way for Mr Slipper. It also, of course, gave Labor an extra vote on the floor of the parliament, with one less vote for the Liberals.

It seemed to be very clever at the time, and Mr Abbott and his senior team were criticised for letting Labor slip under their guard.

That’s until Mr Slipper became the focus of attention after being the subject of a sexual harassment claim by a former staffer.

Whether the staffer was put up to it or not was the subject of conjecture, but when grubby messages between the two men became public, it was all downhill for Mr Slipper, and the government.

When parliament subsequently debated the merits of Mr Slipper continuing to hold the post, the prime minister produced her misogyny speech, rather than defending his continued presence as speaker. The speech became a huge talking point, with many supporters saying it was a major step forward for working women.

The speech was aimed at Mr Abbott and his hairy-chested persona. In one sense it was effective; he and his supporters had difficulty responding to it without being seen as bullies.

On the other hand the speech was farcical. The prime minister was required in the debate to defend Mr Slipper’s continued presence in the speaker’s chair. It was obvious that she couldn’t bring herself to do that, and the next best option was to attack Mr Abbott.

Fortunately for the government, Mr Slipper quit as speaker of his own volition.

Then there was the so-called AWU scandal, which involved Ms Gillard while a lawyer in the 1990s with the Melbourne-based legal firm, Slater and Gordon, and several officials of the Australian Workers’ Union, one of whom she was in a relationship with at the time.

The issue was given huge prominence in sections of the media, with claims of what Ms Gillard knew and didn’t know about the purpose of a ‘slush fund’ for which she gave legal advice.

The matter had a connection to Western Australia as the officials had been based in Perth, and the fund established through the WA Corporate Affairs Commission.

The issue flushed out what could best be described as some colourful characters with which the PM was associated in her days as a lawyer. And deputy opposition leader Julie Bishop took the running for the Liberals, gaining credibility within her own ranks without actually delivering a knockout punch.

While most voters waited for direction on the economy and other key areas, both sides believe the energy devoted to the misogyny and AWU cases has been worthwhile.

Labor is convinced the misogyny issue is now lead weight in the Abbott saddlebags, and will hamper his efforts to rebuild support among women voters as the election due in the second half of next year draws closer.

The Liberals, on the other hand, think the controversy around the AWU case has damaged the prime minister’s credibility and will help them in the polls.

Sure, the carbon tax has not been the predicted negative for the government, and the mining tax is yet to cause any pain among miners, as it hasn’t produced any revenue.

But neither side knows what to do about the boat people challenge. Perhaps it’s time for a return to a bipartisan approach, which worked so well during the Fraser years. Now that would be in the national interest.

BEWARE if the major political parties come up with big spending promises in a bid to woo voters as the March state election draws closer. The reason? There’s not much money to throw around.

WA is still experiencing strong growth - the best of all the states. But the impact on government revenue is significantly lower than in past years, as reflected in the modest surplus of $70 million for the September quarter - $255 million lower than just f2 months ago.

The latest WA Treasury figures show that while revenue was actually $19 million (0.3 per cent) down on this time last year, spending was galloping ahead.

According to the Treasury, spending was up $236 million (3.9 per cent), due mainly to higher salaries (up 6 per cent, or $140 million) and higher services and contracts expenses (up $38 million), linked with road building and maintenance charges.

The first quarter results do not include the austerity measures announced in September, including a cap on the size of the government workforce and administrative economies.

The next major guide on how government’s finances are travelling, the Treasury’s mid- year budget review later this month, is being awaited with great anticipation for several reasons.

The first is that Treasurer Troy Buswell has flagged there will be further belt tightening to ensure the budget stays in surplus. This is to honour Premier Colin Barnett’s commitment never to preside over a deficit budget.

The second is that the government is expected to announce some initiatives, including responding to growing congestion on metropolitan roads, and public transport measures.

Given the tight revenue position and the heavy capital nature of spending in this area, there’s an expectation that the initiatives will have to be financed by borrowings, pushing up state debt.

If that happens it will attract the interest of the opposition, which will note how debt has grown since the change of government in 2008. Then it will become a contest between the merits of various spending priorities, given the tightening financial position.

The opposition will continue to criticise commitments like the Elizabeth Quay project on the Perth foreshore, claiming it should be down the list in the priority stakes.