Waves beneath the waves

A Perth company believes its technology offers a solution for surfers dealing with shark attacks. 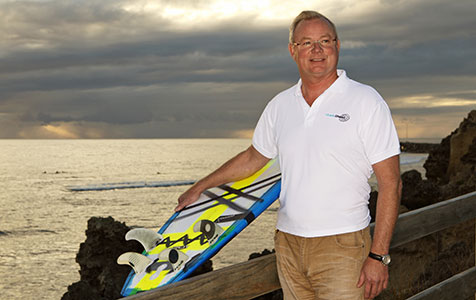 SOUND STRATEGY: Lindsay Lyon has a new strategy for Shark Shield, which deters sharks via of an electrical wave-form underwater. Photo: Terry Lyon

Perth entrepreneur Lindsay Lyon is in the early stages of his plan to reposition the marketing strategy and product range of Shark Shield, the South Australian business he bought earlier this year.

Shark Shield launched its first product for divers in 2002, but struggled to achieve widespread market penetration due to the cost and size of its offering.

With its head office now in Western Australia, Shark Shield is moving away from a business marketing on fear to one prioritising product awareness with a global strategy.

To this end, the company is developing products to suit a range of ocean users, including surfers and swimmers.

Western Australians have reacted to the numerous shark sightings and attacks of recent years – including Saturday’s fatal attack on surfer Chris Boyd off Gracetown – by staying out of the ocean, which has had a negative impact on diving and water sport stores.

“It reduced our business by quite a considerable percentage, and that was from the initial shark attacks in 2010,” Mr Lane told Business News.

With public calls for the government to protect WA’s waters at an all-time high, Shark Shield has applied for $300,000 from the state government in the second round of grants from its $2 million shark hazard mitigation applied research program.

If successful, Mr Lyon said, Shark Shield would spend the grant taking its prototype product for surfboards to the market within 18 months.

The Shark Shield for surfboards will be the first product designed in Perth since Mr Lyon bought the company.

Mr Lyon was approached by a venture capitalist to run Shark Shield 12 years ago; and while he recognised the potential of the business, he was busy with other projects.

In the past, Mr Lyon said, the company had lost about $6.5 million through poor strategic decision making and creating fear-based point-of-sale marketing that turned vendors off.

Mr Lyon has changed the packaging of the company’s main product – a personal waterproof electronic wave-form shark deterrent costing about $700 – to feature images of people enjoying water sports and a bolder logo with the tagline that Shark Shield is the only scientifically proven and independently tested shark deterrent in the world.

He is also hopeful the surfboard shark deterrent will open up a new market for Shark Shield products, which are currently targeted at divers, scuba divers, spear fishers and ocean kayak fishers.

Shark Shield is looking to raise a $750,000 for its surfboard product by crowdfunding on Indiegogo.

Surfers who pay $100 on Indiegogo will receive a 50 per cent discount on the surfboard deterrent once it’s available, or a discount on any current products.

Shark Shield is also in the early stages of planning to raise $750,000 from the sale of 30 per cent of the company through the issue of $20 shares.

With the capital Mr Lyon is hoping to raise he will be able to market Shark Shield to key US locations, a change to the business’s previous focus on selling in Australia.

The most vital part of turning Shark Shield into a profitable and growing company is creating product awareness, Mr Lyon said.

“The single biggest challenge for Shark Shield is that people don’t even know it exists.”