WA’s natural wave resources have made it home to three energy companies that have taken a collegial approach to developing the new technology. 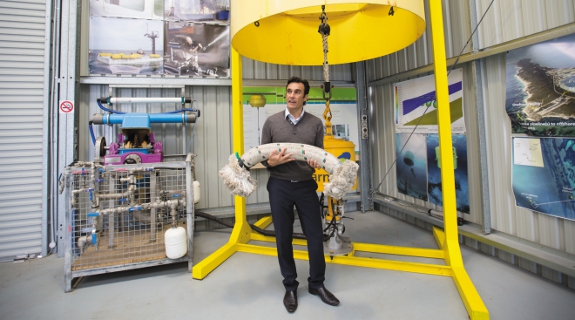 WA’s natural wave resources have made it home to three energy companies that have taken a collegial approach to developing the new technology.

The degree to which operators in the state’s burgeoning wave energy industry are invested in the success of their competitors provides a marked point of difference to most business sectors in Western Australia.

The complexities of developing commercially viable models that can convert unpredictable waves into a steady stream of electricity have proved harder to crack than for wind and solar technologies.

As a result, hundreds of companies around the world that entered the wave energy industry have failed, leaving only three that are generally regarded as close to commercialisation and about 50 in earlier stages.

“It was for the simple reason that if they were to fail it reflects really badly on the wave energy industry generally,” Mr Ottaviano said.

“Investors sometimes find it hard to make the distinction that, just because one technology’s failed it doesn’t mean the whole industry is a failure, particularly in wave energy where there have been lots of failures.”

While Mr Ottaviano is complimentary of Protean and Bombora, and they of his business, he has reserved judgement until they outlay major capital (Carnegie has spent $100 million) and carry out long-term ocean trials, as Carnegie has done during the past decade.

However, Bombora and Protean have both argued they can bring products to market much quicker and for less money than Carnegie.

Stonehenge Metals managing director Bruce Lane, who revealed to Business News he is a Carnegie shareholder, said the company had spent just over $1 million developing intellectual property and $500,000 to get recent approval to test 30 prototypes off Bunbury Port.

Stonehenge, which started out as a uranium and vanadium explorer (it has now divested half of its South Korean project), acquired Protean for $1.3 million last year and is now in the process of going through a re-compliance listing on the ASX.

Mr Lane said by focusing on creating easily deployable and smaller devices, Protean believed it could offer island dwellers, especially, a viable alternative to Carnegie’s deep ocean large-scale strategy, which is focused on markets in the UK and Europe.

“Carnegie’s device is of a scale and engineering approach that requires a heck of a lot of money to be spent ... when you stand next to a Protean device you’ll understand we’re playing the game differently,” he said.

While Protean and Carnegie have opted for buoy-type designs attached by a rope to a single point on the sea floor, Bombora’s mid-scale prototype being tested in the Swan River is completely attached to the ground, with a large, angled, moveable membrane.

Brothers and former mining engineers Shawn and Glen Ryan, who designed the technology, anticipate they need to raise $6 million by the end of next year to continue developments; a sum they hope to raise without going public.

According to chief executive Sam Leighton, Bombora has struck on a strategy that will allow it to capitalise on intellectual property early, use cheaper, off-the-shelf technology where possible, and bring in partners to help them commercialise designs.

“As a small company, we plan to license our technology to big companies that will produce these devices in very large scale,” Mr Leighton said.

“Our plan is to be involved in the production of the full scale prototypes, then work with partners who would become manufacturers for the full-scale.”

Until any of the companies has a commercial product, they don’t expect their value, or in the case of the two public companies, their share price to reflect their achievements.

“We would obviously like the share price to be higher than it is ... but I’m confident that it will be reflected in due course,” Mr Ottaviano said.