Two former BHP Billiton and Rio Tinto engineers from the Wheatbelt officially launched a wave energy prototype in the Swan River today as part of a long-term plan to produce electricity at costs so low it will rival wind energy. 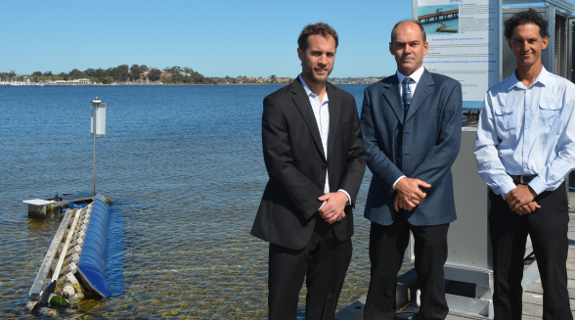 Two former BHP Billiton and Rio Tinto engineers from the Wheatbelt officially launched a wave energy prototype in the Swan River today as part of a long-term plan to produce electricity at costs so low it will rival wind energy.

Described by Energy Minister Mike Nahan, who attended the launch along with Western Australia’s chief scientist Peter Klinken, as a “modest but important experiment”, Bombora Wave Power’s co-founder and director Shane Ryan admitted it was a long way off commercialisation. However he said the business was also looking to develop its intellectual property, which it could license at any stage during development.

Speaking from the Como Jetty, alongside where the mid scale prototype was installed recently, Mr Ryan told Business News he and his brother Glen had spent millions on the business out of their own funds after leaving lucrative careers in the mining sector.

“We were doing quite well during the boom but we realised the opportunity in here is very substantial and it was going to take a hit on our income at that time, but we walked out of multi hundred thousand dollar jobs to take this on,” Mr Ryan said.

Efforts to cheaply extract power from unpredictable waves has proven trickier to commercialise than more established renewable energy technologies such as wind and solar.

Because of this, only a relatively small number of wave energy businesses operate globally, making WA more prominent because it is home to three – Bombora Wave Power, Carnegie Wave Energy and Protean Wave Energy.

Mr Ryan said he believed the main difference between Bombora’s design, which will be attached to the sea bed in shallow waters, and those of Carnegie and Protean which both use buoys, was cost.

“Our system is going to be cheaper we believe by a quantum because our system sits on the sea floor, which means it can survive big storm events and rogue waves,” he said.

Mr Ryan anticipated the company would need to raise $6 million by the end of next year to finance a bigger prototype and further developments.

Its potential developments have already caught the eye of Indonesia's Anoa Power, which in June signed a technology evaluation agreement with it as a precursor to an eventual manufacture and distribution arrangement.

Mr Ryan said he had also received interest from overseas and local investors keen to take equity in the private business which currently has eight equity shareholders.

“We’d like to stay private for as long as we can. But we’ll canvas all options,” he said.

In contrast Carnegie, which is the most advanced in the long journey to producing a commercially viable product and Protean, which was recently acquired by Stonehenge Metals are both publicly listed.

Mr Ryan said Bombora had only received a few hundred thousand dollars from Commercialisation Australia and other industry grants, making he and his brother’s investment the biggest contribution by a long way.

However, the business had saved on capital costs by designing a device that could operate in calmer conditions closer to shore.

It has also tapped into expertise from a number of universities and science centres including The University of Western Australia, Curtin University, the Pawsey supercomputing centre in Bentley and the Australian Maritime College based in Launceston.