Derby business Wattnow Electrical has learned how to overcome major challenges on its way to achieving significant growth over the past three years. 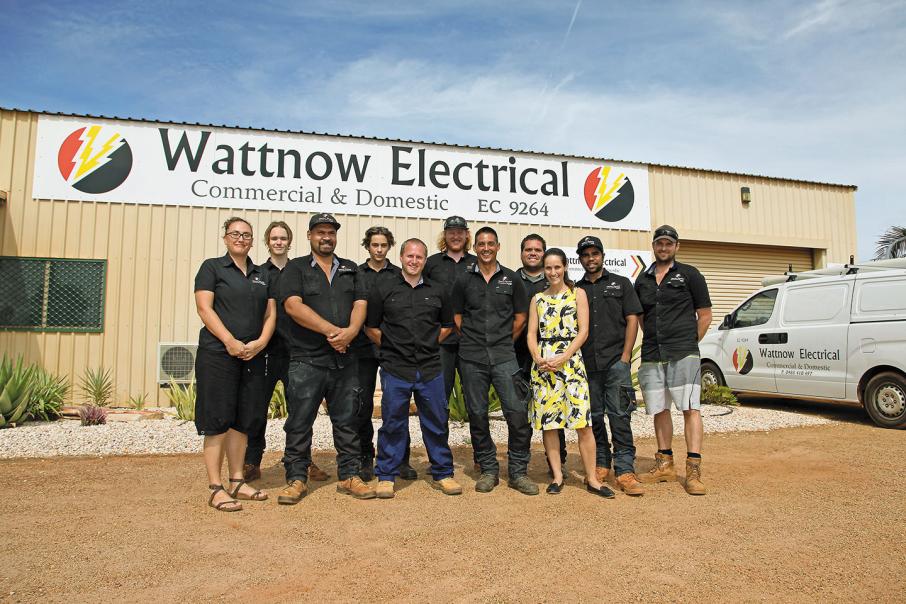 Wattnow Electrical co-owners Jonathan Smith (fifth from right) and Prue Plowright (third from right) with staff at their Derby office and workshop.

Derby business Wattnow Electrical has learned how to overcome major challenges on its way to achieving significant growth over the past three years.

Owned by husband-and-wife team Jonathan Smith and Prue Plowright, the business has experienced some significant setbacks since being registered in 2010.

These include the closure of the Curtin detention centre and several mines in the region, followed in 2015 by a big government agency deciding to appoint a single contractor for the whole state.

Despite these setbacks, Wattnow has lifted staff numbers from two in 2014 to 11.8 full-time equivalent currently, and there has been similar percentage growth in revenue.

The business also reached its 33 per cent indigenous staff target, comprising one electrician, two apprentices, and a trades assistant – and that’s not counting an Aboriginal school student who enjoyed his work experience placements so much, he kept on coming in during the holidays.

Wattnow’s directors have continuously invested in the business, most notably upgrading to a workshop and office in central Derby.

They have also invested in four new work vehicles and an excavator, and became the first electrical business in Derby to have a fully digital, cloud-based management system.

With each crew having its own iPad, the system has made tasks like scheduling, job monitoring and invoicing more efficient, boosting cash flow.

The business has grown to the point where it has five working crews supported by an administration manager.

This has allowed Mr Smith to focus on securing more work from local residents while also bidding for bigger contracts, such as new housing developments.

Wattnow is always looking ahead, for instance training staff in services that are lacking in the region, such as air-conditioner installation.

Growth options for the future include opening offices in nearby towns such as Broome, Fitzroy Crossing and Halls Creek.