Waterbank construction to kick off next year 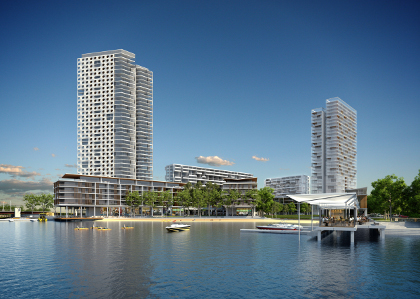 Lend Lease will start construction at its $1 billion Waterbank precinct at East Perth late next year after finalising an agreement with the Metropolitan Redevelopment Authority today.

Planning Minister John Day today said the “milestone agreement” represented a significant investment from Lend Lease in the precinct, which is the flagship area within the overall $2.6 billion, 40 hectare Riverside project that will see East Perth transformed.

A government spokesman told WA Business News the milestone is a heads of agreement between Lend Lease and the MRA over the development of the precinct.

Mr Day said construction will start in late 2014, with Lend Lease’s first building and the majority of the public domain to be delivered by late 2017.

Waterbank will include a mix of more than 600 apartments, offices, restaurants, shopping areas and possible short-stay accommodation, and public promenades featuring a beach and a wetland area.

The state government first announced Lend Lease as the developer of the four hectare Waterbank precinct in late 2011, beating proposals put forward by Brookfield Multiplex and Frasers Property Group, which is overseeing the $450 million Queens Riverside development that includes luxury apartments and a short-stay hotel.

Since then, the state government has awarded a $22 million contract for road and infrastructure works at the Riverside project, which has also seen major work focused on pushing water out of the flood prone area.

Further comment was being sought from the MRA at time of publishing.