Water key for growth in NW

Rather than hindering development, the government is working to encourage new agricultural opportunities in the north of the state. 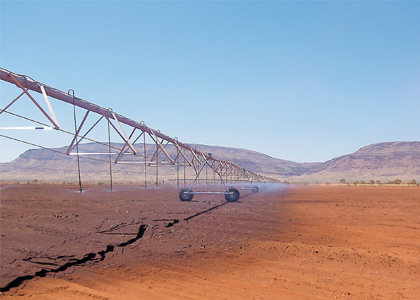 DUAL USE: Rio Tinto’s Hamersley Agricultural Project demonstrates the potential of irrigated agriculture in the Pilbara through the use of mine dewatering. Photo: Rio Tinto

Rather than hindering development, the government is working to encourage new agricultural opportunities in the north of the state.

WESTERN Australia is on the verge of another period of sustained growth, and it’s not in raining.

The opportunity is fully sustainable with innovation in agriculture, land tenure and rural businesses. It has the potential to reshape WA society and show this state to be leading the nation in economic development.

The key is to develop the right resources in the right places. Government has a role in not only being part of the decision making, but in facilitating the right opportunities and providing common-use infrastructure

In his article Bureaucracy a blight on Pilbara potential, Mark Pownall highlighted some of the difficulties in realising this vision for WA.

It is important to point out that the state government - through the Department of Regional Development and Lands and the Department of Agriculture and Food - is deploying its Royalties for Regions initiative to investigate the development of new agricultural opportunities in the north of the state, such as water opportunities for irrigated agriculture in the Pilbara through the use of mine dewatering.

With increasing concern around the world about future food security, it is timely to consider that one of the main reasons to promote the area’s potential for further development is to meet growing international demand for food and to diversify the economic base in the Pilbara.

The government, through the Department of Regional Development and Lands, supports examples such as that highlighted in a column in this newspaper (Bureaucracy a blight on Pilbara potential) about Rio Tinto’s Hamersley Agricultural Project and its capacity to demonstrate the possibilities of agriculture in the Pilbara, both for the potential of the water source and the land required to grow agricultural produce.

It is important to remember that the Rio Tinto project is not an economic development opportunity that will be readily duplicated at such a scale for most pastoral leases with access to adequate water. However, there are opportunities for new agricultural precincts as well as for diversification on individual pastoral leases.

Royalties for Regions has funded nine pilot water projects in the Pilbara worth $2.5 million to test the feasibility of projects to make the best use of water resources. Irrespective of whether such opportunities should have been taken up several decades ago, pilot projects are an appropriate response to testing such developments, as not all of the agronomic, hydro-logical or economic aspects of the enterprise are proven in the Pilbara region.

The Pilbara water opportunities projects were focused on using water pumped from mines to develop new agriculture precinct, providing an alternative industry to mining. The state government’s rangelands reform program has been initiated to free-up tenure in the rangelands to increase investment, economic diversity and employment.

New lease tenure options are being developed for Crown land to expand the range of economic development opportunities on the rangelands.

In addition, the pastoral diversification permit process is being streamlined to reduce duplication and unnecessary delay in handling permit applications.

Where good quality land and water are available, pastoral lessees are developing new agricultural enterprises or more intensive pastoral enterprises, based on feedlotting rather than extensive rangelands grazing. This is achieved using the existing diversification permits.

There will no longer be a requirement for pastoralism to be the dominant activity on the lease. Together with the option of a perpetual pastoral lease and new diversification permit provisions, the key benefits will be greater flexibility, security and incentive for the pastoral industry and for new entrants to invest in diversified business opportunities, many of which could be non-pastoral in nature.

Similarly, the Ord-East Kimberley expansion project is a key priority of Royalties for Regions, recognising that regional centres like Kununurra are the backbone of WA’s economy in the north.

The aim of the project is to realise the full potential of available resources in the East Kimberley to create a vibrant, major regional centre based on agricultural production.

The project will increase the size of the Ord River irrigation area by 8,000 hectares to about 22,000ha of agricultural land and lay down key infrastructure to enable the private sector to invest in further development, potentially taking the Ord Scheme to more than 50,000ha of production over the next decade.

This will provide major opportunities for growth and sustainability for the region’s economic and social development.

The government is investing in further development of the Carnarvon horticultural precinct with the Gascoyne food bowl initiative and also in the potential to develop other irrigated precincts based on the Canning and LaGrange aquifers to the south-west of Broome.

While these are positive advances for development of the state, it is not in anybody’s interest to release land that is ultimately unsuitable for the purpose of intensive agriculture.

It is vital that the land and water resources developed are sustainable in terms of their environmental acceptability and economic potential.

Assessing these aspects of development in the context of our subtropical remote north requires a good deal of investigation and careful judgement.