Disgruntled Water Corporation employees will be dumping bottles of dirty water on the steps of Water Minister Mia Davies’ office in Havelock St today, in protest against outsourcing. 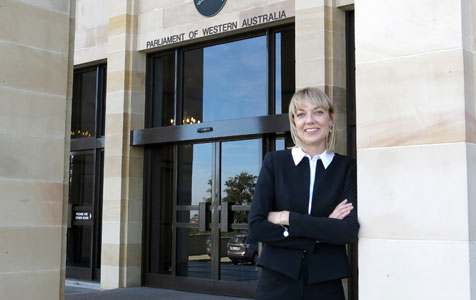 Disgruntled Water Corporation employees have made a stand against job outsourcing with a protest at Water Minister Mia Davies’ office in Havelock St today.

The employees, who are members of union United Voice, dumped bottles of dirty water on the steps of Ms Davies' office, which they said symbolised “what WA water will look like if the state government keeps outsourcing water and slashing jobs”.

“Water Corp is exceedingly profitable for this state government yet they continue to compromise quality when they outsource jobs,” he said.

Programmed, a Water Corporation contractor, announced it would be making 14 staff redundant next week, and warned there would be more to come.

“The Water Corp is slashing its skilled workers, and that’s when mistakes happen,” Mr O’Donnell said.