Labor’s John Kobelke has called on both sides of politics to help ensure the billions invested in capital works projects are spent wisely. 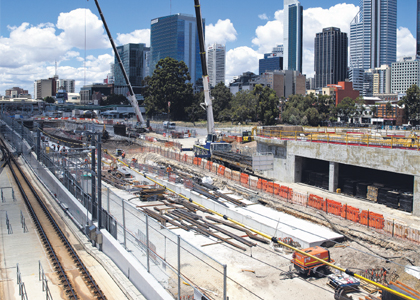 COST BLOWOUT: The latest City Link cost estimates are much higher than the original figure of $468 million. Photo: Annaliese Frank

Labor’s John Kobelke has called on both sides of politics to help ensure the billions invested in capital works projects are spent wisely.

HOW thoroughly thought-out are state government decisions on major infrastructure projects? Nowhere near enough, according to the chairman of parliament’s Public Accounts Committee; and he cites the Ord River stage II development as an example.

As chairman, Labor’s John Kobelke has called on both sides of politics to support the development of a state infrastructure plan to help ensure taxpayers get the maximum return from the billions of dollars invested in capital works projects.

He says the latest Grd development, in which the federal and state governments have invested more than $500 million, is a project that should have been more exhaustively assessed.

“If you are going to spend massive amounts on infrastructure, you hope it would be spent on projects which will be given a priority because they give the best possible return on the dollars spent,” Mr Kobelke said.

“One of my concerns with the Ord-East Kimberley expansion project is that there did not seem to be any process of establishing clearly what the objectives of the project were.

“Was it about populating the north? Was it about increasing development in the north and producing a food bowl? Or was it about addressing indigenous disadvantage?

“I certainly want money spent there but the issue is: was that clearly designated as the objective of putting in what is now $322 million (from the Royalties for Regions fund)? The case was not made.”

Mr Kobelke, who was a minister in the Gallop and Carpenter Labor governments, said that in addition to the R4R money, the Commonwealth had contributed $195 million for projects in Kununurra such as housing and upgrading school, hospital and airport facilities.

He noted that in 2008 the state commitment had also been initially assessed at $195 million, but the cost had been pushed up significantly, mainly due to the addition of two extra areas for development.

The state government has announced that a Chinese company is the preferred proponent to lease and develop 13,400 hectares of newly irrigated farmland in the Ord development, with a proposal to invest $700 million over the next six years.

The company’s target is to produce about 4 million tonnes of sugar cane annually, build a $425 million sugar mill, and export about 500,000 tonnes of sugar.

Critics suggested this was inconsistent with the government’s promise to develop the Ord as a ‘foodbowl’. But Premier Colin Barnett said that sugar fell within the definition of ‘food’, and praised the development as a ‘significant act of self-determination’ for the traditional indigenous landowners.

Mr Kobelke said the process behind the development of the Perth City Link project, which involves the sinking of the railway line, had similarities with the Ord project. The latest City Link cost estimates were much higher than the original figure of $468 million, of which the Commonwealth agreed to pay $236 million.

The current cost figure is $737 million. Contributing factors to this increase include the state deciding to pick up more above ground development costs - much of which it hopes to recoup from land sales - and the decision to place the Wellington Street bus station underground.

“In both cases it is reasonable to ask whether the government - indeed any government - would have proceeded with the proposals had they known that in order to achieve the projects’ objectives, significantly more money than initially estimated would need to be spent,” Mr Kobelke said.

The former minister said his colleague Eric Ripper had been working on a state infrastructure plan during the final year of the Carpenter government, but the election had been called before it could be completed.

“We need a commitment to more rigorous planning and assessment for major projects,” Mr Kobelke said. “A state plan would be an important part of ensuring we get better value for the money we spend.”

It could be a vain hope. Former Liberal premier Richard Court outlined his experience in a frank speech to the conservative Samuel Griffith Society in Brisbane in August.

“In the months before a federal election you will always get a call from the treasurer in Canberra if he is from your party, saying Took, we want to spend a few million on a new highway, how about working with us and we will go 50-50 putting this highway through some marginal seat?” Mr Court said.

“As if you can design and build a highway in a few months. But they think they win political points by saying we are announcing that you are going to do that particular highway.

“The fact that they have ignored your request for several years to build that or another road is just brushed aside in a phone call. Both the major political parties operate that way.”

FEDERAL opposition leader Tony Abbott was a model of restraint when he addressed about 550 guests at a leadership breakfast during a three-day visit to Perth.

Mr Abbott pressed all the right buttons, praising the state’s strong economy, and pledging to repeal the carbon tax as the first act of a new coalition government if elected, as well as abolishing the mining tax.

He also promised to ensure that union leaders would be treated the same as company directors and officials who broke the law. They would not be able to rip off their members ‘scot free’.

But after promising to abolish the two taxes, he indicated there would be no bidding war with Labor as the election, due in the second half of next year, got closer.

Asked if he would repeal Labor’s means testing of the private health insurance rebate, he responded sympathetically; but there was no timetable for action.

“There are lots of things a coalition government would like to do. But the fiscal reality is we won’t be able to do all of them straight away. We have support for private health insurance in our DNA, and we will restore the policies we know will work,” he said.

The Liberal leader was on a ‘don’t scare the horses’ visit, which is understood to have also included tapping into financial support from sections of the mining and resources industry to bolster the federal campaign war chest.

The WA division kicked in more than $1 million last time, and party officials want that repeated.

But Mr Abbott has a big challenge with his image in the west, with a poll in The Australian Financial Review indicating support for the Liberals in WA at an impressive 50 per cent, compared with 30 per cent for Labor.

His approval rating in WA is just 3 3 per cent, however, compared with 51 per cent for Julia Gillard. Expect his minders to be furiously working on bridging that gap between now and polling day.