Perth company director Sharon Warburton has been named as the incoming chair of a soon-to-be-established federal government fund that will have $5 billion to spend on infrastructure in northern Australia. 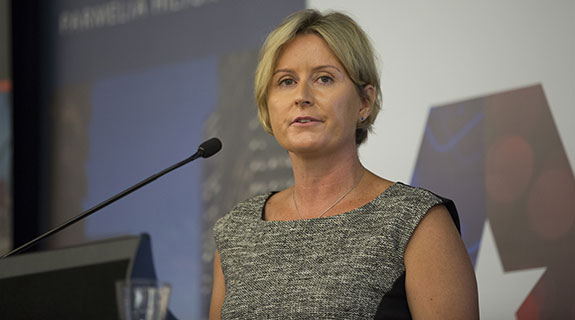 Perth company director Sharon Warburton has been named as the incoming chair of a soon-to-be-established federal government fund that will have $5 billion to spend on infrastructure in northern Australia.

Ms Warburton, a prominent local businesswoman who sits on the board of a number of organisations including Western Power, Fortescue Metals Group and Wellard, will chair the Northern Australia Infrastructure Facility (NAIF), while Justin Mannolini, who recently resigned as executive director of Macquarie Capital, will sit on the NAIF board.

The NAIF will be headquartered in Queensland and will focus on unlocking economic and population growth opportunities across northern Australia.

The fund's geographical focus has also been pushed out further, and now includes areas such as Exmouth, Carnarvon, Meekatharra, Wiluna, Shark Bay and the Gascoyne region.

“From July, this facility will provide financing to build the transport, energy, water and communications infrastructure needed in our north,” Resources and Northern Australia Minister Josh Frydenberg said.

“This will create jobs, enhance investment, and unlock the full potential of this vibrant region to grow the northern Australian economy.”

Mr Frydenberg said the individuals chosen for the NAIF board had extensive experience and expertise across a range of sectors and skills.

“They are also knowledgeable and passionate about the opportunities and challenges we face in developing Australia’s north and now, with the $5 billion NAIF, they have an important opportunity to turn the government’s vision into a reality,” he said.

Ms Warburton will immediately begin working with the Department of Industry, Innovation and Science and the Export Finance and Insurance Corporation to form a pipeline of potential projects to ensure decisions on project finance can be made after the NAIF is established in September.