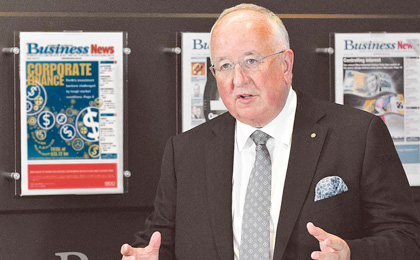 Sam Walsh has the chance of a lifetime to head one of the world’s biggest companies, but he won’t be chief executive of Rio Tinto for long, and he’s only there because the board has finally decided to clean up the last of the mess left by the 2008 global financial crisis.

At 63 years old, Walsh has been chosen to plug a gap until a younger CEO can be recruited, in precisely the same way an ageing deputy coach of a football team gets the call up when the coach is sacked midway through a poor season.

In the case of Rio Tinto the coach was Tom Albanese, a delightful American who was appointed at the worst possible time, received appalling advice on commodity demand and mine planning, and put his signature on some of the mining industry’s worst ever deals.

If timing is everything in life then Albanese got it horribly wrong, and Walsh has a got it wonderfully right.

The really interesting question is whether both men actually have similar talents, but Albanese was the man in the wrong office at the wrong time.

The loser first, because that’s how Albanese will be remembered, especially for the billions of dollars wasted on the all-cash 2007 acquisition of the Canadian aluminium producer, Alcan, but more recently for the botched development of a coal mine in Mozambique.

Alcan, a deal approved by the entire Rio Tinto board, was acquired at the absolute peak of the commodity boom, an event which even the Australian Government believed would last for decades.

The boom did not last, as everyone now knows, and Albanese must be wondering why he did not listen to a predecessor chief executive at Rio Tinto, Leigh Clifford, who often warned that commodity prices always rose and fell: “they don’t call them cyclical for nothing,” was one of Clifford’s favourite sayings.

With Alcan, Albanese signed off on a deal costing $US40 billion just before the 2008 financial crisis, just as aluminium demand crashed, and just as a fresh wave of excess aluminium production hit world markets, with some of it coming from the Middle East where the metal is being produced almost as a by-product from burning surplus gas.

From $US2800 a tonne when the Alcan deal was signed the aluminium price plunged to as low as $US1300/t, and has only recently managed to crawl back to around $US2000/t.

In several stages, much of the original Alcan purchase price has now been written off, a quaint accounting expression for shareholder’s funds wasted on management folly. The latest $US14 billion carved out of Rio Tinto’s books should be enough to see the company post a big loss for the 2012 calendar year.

The second “dead skunk” around Albanese’s neck (and credit for that expression goes to another ex-CEO, Hugh Morgan, from Western Mining who suffered his own crop of failed deals) was the acquisition of Riversdale Mining which had proved up a large coal reserves in Mozambique.

In theory, it should have been an easy deal. Mozambique is on Africa’s east coast, all that Rio Tinto had to do was get the coal near the town of Tete to a port.

Two factors tripped Rio Tinto. The price of coal crashed, and there was no satisfactory transport solution for getting the coal to port.

The coal price was a factor beyond Rio Tinto’s control. The transport blunder was entirely of the company’s making, largely because it ignored the advice of locals.

When I visited Tete as a guest of Riversdale there were two transport options being discussed. Rail, or barge down the Zambezi River. The cheaper option was barging, but it was also one that South African analysts on that tour said would not work because of irregular water flows and environmental hurdles.

The South Africans were right. The barge option failed, forcing Rio Tinto into a more expensive solution, and resulting in the latest big asset value write off; another $US3 billion of shareholder’s funds flushed away (though not down the Zambezi).

It is this cocktail of botched investments that Walsh is inheriting as a temporary CEO, along with a long list of other challenges which will test the man who has ridden high on record iron ore prices, and had the sense to not forget that a mine manager can never take credit for prices, he can only take credit for keeping costs down.

The first task for Walsh, starting today after the sudden exit of Albanese, is to make sure that all the bad news about Alcan and Riversdale is finally out.

The second task will be to make sure that a third possible problem, the Oyu Tolgoi copper mine in Mongolia, does not become the disaster it might.

Trouble with Mongolian government officials and repeated attempts to change the deal signed with Rio Tinto is what could cause one of the world’s great copper mines to become Rio Tinto’s next multi-billion write-off.

At best, Walsh will have two years in the top Rio Tinto job given that few people continue in the chief executive’s chair beyond 65.

The time factor means that he will have a brief from the board to stabilise the company after the trauma of Albanese’s ditching and investor anger at the wasting of their money.

A far bigger problem, and one for Walsh’s successor, will be to restore balance in Rio Tinto which has become excessively reliant on profits from a single division, iron ore.

To borrow another of Clifford’s sayings, said with contempt when he was speaking of other companies, Rio Tinto has become a “one-trick pony”, shedding its status as a true diversified miner and effectively morphing into a near pure-play iron ore miner.

Boosting profits from copper, coal, and aluminium is an essential step in the revival of Rio Tinto.

If he can start that process then Walsh will prove that he is more than a man in the right office at the right time.