Kristen Walsh sat down with Business News to discuss her journey from Detroit to Perth, and what it takes to lead an engineering team across the Asia-Pacific. 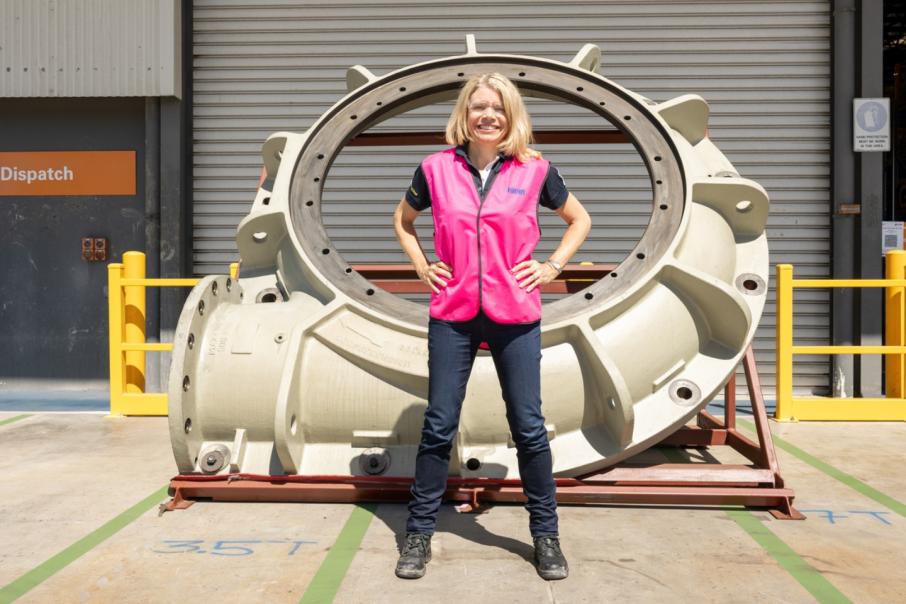 Kristen Walsh leads a team of more than 1,800 workers across the Asia-Pacific region. Photo: David Henry

Born in Detroit, Ms Walsh, an engineering graduate who is now head of Weir Minerals’ Asia-Pacific operations, has been in Australia for 14 years, working in senior roles with ASX-listed companies in Western Australia and Queensland.

But Australia wasn’t her first overseas posting and in fact it was an opportunity in the UK, where she lived for nine years, that ultimately brought her Down Under.

“The normal thing to do if you grow up in Detroit and if you’re into math and science … [is] to become an engineer,”

Ms Walsh told Business News, noting many of her classmates went on to work with automotive companies.

Michigan’s most populous city was once the car manufacturing capital of the world and home to Ford, General Motors and Chrysler in the early 1900s.

For Ms Walsh, though, any appeal was fleeting.

“I did a lot of summer internships with Ford Motor Company, and so it was natural to progress into the automotive industry, but I really wanted to expand my horizons,” she said.

That outlook was prescient, as it turned out, with increased competition from Chinese and Japanese manufacturers, and the bankruptcies of Chrysler and GM in the late 2000s, dulling the lustre of the place colloquially known as ‘Motor City’.

Instead of a career in the auto business, then, Ms Walsh’s first move after graduating from the University of Michigan in 1995 was to head to Pennsylvania, where she worked as a salesperson with engineering software company Stoner Associates.

Not long after, she applied for a position in Birmingham, in the UK, where she was to represent Stoner in a complex software implementation project for Severn Trent Water.

“It was a game-changer for me, career wise,” Ms Walsh said.

Stoner was acquired by Advantica towards the end of the project, in 2001, with Ms Walsh permanently based in the UK thereafter.

There, she completed an MBA at the University of Warwick and met her husband, Perth-born Patrick Walsh, who is the chief executive of Craig Mostyn Group, which owns Linley Valley Pork.

The pair had two children in the years following, with Ms Walsh continuing at Advantica (now part of DNV GL) in numerous roles, including as general manager with profit and loss responsibility.

In 2007, she and her husband made the decision to relocate to Australia.

“We loved living in the UK but wanted to have some sort of family support,” Ms Walsh told Business News.

“We made the decision that, before the kids got to school age, we would move to either Detroit or Perth.

“Perth was a much easier choice.”

She said part of the move involved looking for the right role.

In late 2007, Ms Walsh started as chief operating officer of PearlStreet, an oil and energy company formerly located on St Georges Terrace. It was acquired by Queensland’s Campbell Brothers in 2009.

The group is now known as ALS, with Campbell and Australian Laboratory Services having struck a merger deal in 2010.

Ms Walsh then relocated to Brisbane where she worked as general manager (industrial) at ALS for almost 12 years.

In October 2021, she was appointed a regional managing director of global engineering company Weir Minerals.

“There are a lot of parallels between the two organisations,” Ms Walsh said, referring to ALS and Weir’s blue-chip clients and more than 150-year history.

“The major difference is that Weir manufactures and sells equipment, and then provides support around that equipment, whereas ALS is purely providing services.”

In her new role, Ms Walsh leads a team of more than 1,800 employees across the Asia-Pacific region. She’s based at Perth Airport, where Weir manufacturers and stores some of its mining equipment.

However, WA’s closed border has meant a lot of video conferences for the new managing director and client site visits limited to those within the state.

“I haven’t had the opportunity to meet team members outside of WA face to face, or my management,” Ms Walsh said.

“I’m doing as much as I possibly can to get to know people [through] video conference.

“I’ve also had the opportunity to visit a number of different client sites in WA.

“The way I see it is I’m learning the business through understanding the customer experience, as well as through the people experience on the ground. “

Those are the best days; being visible in the business, being hands-on and having small conversations.”

That includes for the supply of crushing and pumping equipment to the Roy Hill iron ore mine – painted pink in support of breast cancer awareness, an initiative of the Hancock Prospecting subsidiary – and to Fortescue’s $3.5 billion Iron Bridge magnetite project.

Given its high-profile client list and staffing requirements across a range of locations, Weir also faces the challenge of dealing with surging COVID-19 infections in jurisdictions outside WA.

Ms Walsh said the company (at the time of speaking to Business News) had 63 employees infected with the virus, with a further 86 isolating after having been exposed.

“We’ve got tremendous pressure on the people who are working in our factories because the manning levels are so low,” she said.

“The good part I guess … is that we know it will go through that cycle.”

She noted that, while Weir manufactured products in Australia, the business also relied on companies overseas for equipment.

That has given rise to supply chain issues, which have affected many businesses in recent months.

Ms Walsh indicated that staff shortages at ports would likely exacerbate this issue further in months ahead, as port workers started to go through their backlog of inventory.

“[We’re] focused on making sure that our employees feel supported through such an extended period of challenge … and [are] working hard to give our customers as much notice as possible so they can plan,” she said.

Unperturbed by the disruption flowing from the pandemic, Ms Walsh said it was her interests outside of work – such as golf and yoga – that kept her grounded.

“I see my role really as a wife, mother and leader in the work environment, so for the last 20 years I’ve primarily focused on delivering on those roles,” she said.

“Right now, because my kids are 17 and 16, I have more time and so I’ve really thought more about how to get a balance out of life … and how to give back.