A flood of money for goldminers has defined WA’s corporate finance market this year, with Canaccord Genuity and Macquarie Capital leading the charge. 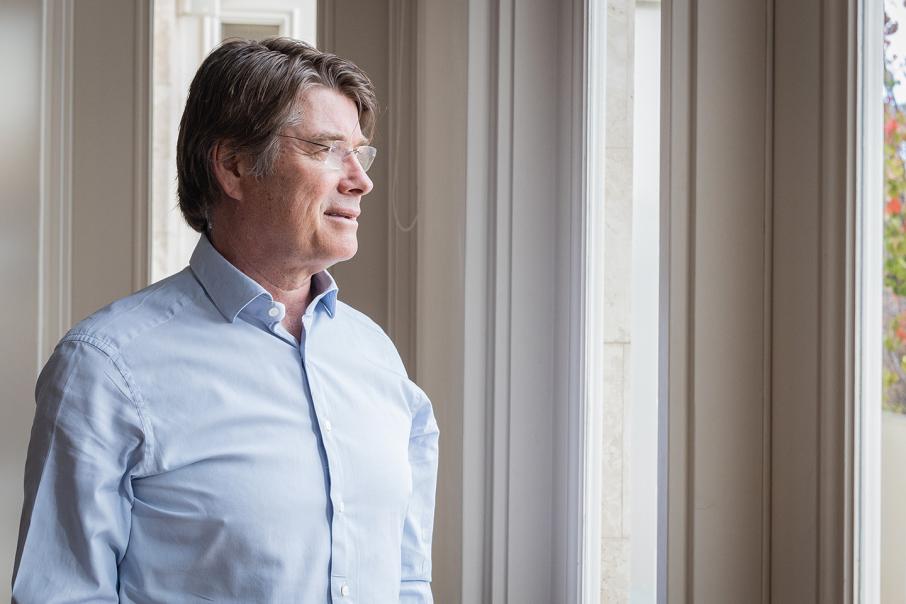 There have been two very different markets for corporate finance dealmakers so far this year.

Corporate advisers working on mergers and acquisitions have struggled to complete deals as companies have become cautious in the midst of COVID-19.

But for brokers and lawyers working in equity capital markets (ECM), it has been a buoyant market.

The Business News Data & Insights database of Western Australia-related deals has 236 announced ECM transactions collectively worth $5.7 billion for the six months to June 30.

That’s close to the total number of deals recorded in 2019. 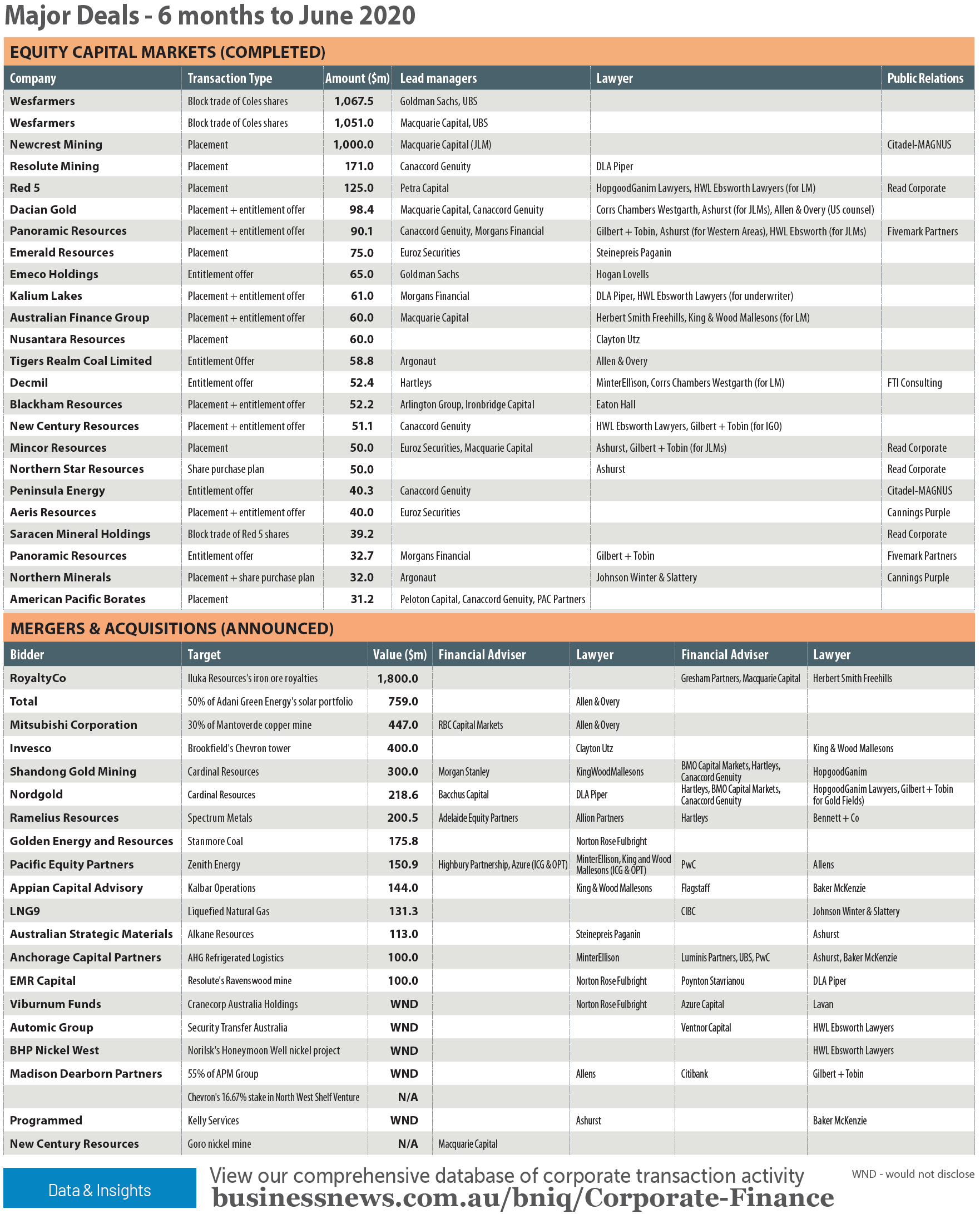 “London is very much a mining investment hub as well, like New York and like Toronto,” he said.

“The investors that we deal with on the natural resources side are very different to the investors in cannabis,” he said.

“They are not swapping in and out, they are quite distinct.”

Canaccord had a lead role on 42 WA capital raisings worth a combined $716 million over the six months to June 30, making it by far the busiest broking firm.

Canaccord was pipped on the Business News league table by Macquarie Capital, which had a lead role on five transactions worth $2.2 billion.

Macquarie’s ranking was boosted by two big transactions: a $1 billion block trade of Coles shares for Perth-based Wesfarmers, and a $1 billion raising for gold miner Newcrest, which the Perth office supported.

“There is a significant pool of investors chasing these transactions,” Macquarie Capital director John Stanning said.

“The miners, including the juniors, are seeing a very supportive market.”

His colleague Stuart Owen said the flow of capital was coming mainly from Australian institutions.

“Australian investors have been very supportive and there has certainly been renewed interest from North America in the gold and mining sector, which was quiet last year,” he said.

Speaking at a recent Mines and Money APAC virtual conference, Hartleys chairman Ian Parker remarked on the increased willingness of investors to take on risk.

“I’ve never seen an appetite for risk like this,” Mr Parker said.

“The quantity of capital raisings is extraordinary.”

The keen interest in WA mining stocks is part of a broader trend around the strong stockmarket recovery since its steep dive in March.

Mr Owen said about $25 billion had been raised on the ASX since the onset of COVID-19.

Macquarie has had a lead role on many of these, executing 21 equity raisings worth approximately $11.3 billion since the start of March.

Initially, most of these transactions were for companies that had been adversely affected by the pandemic and needed to repair their balance sheet but the market was increasingly supporting growth stories.

The buoyant market has continued into the new financial year, with substantial raisings by gold stocks such as Bellevue Gold ($100 million), Ora Banda Mining ($55 million) and Bardoc Gold ($24 million). 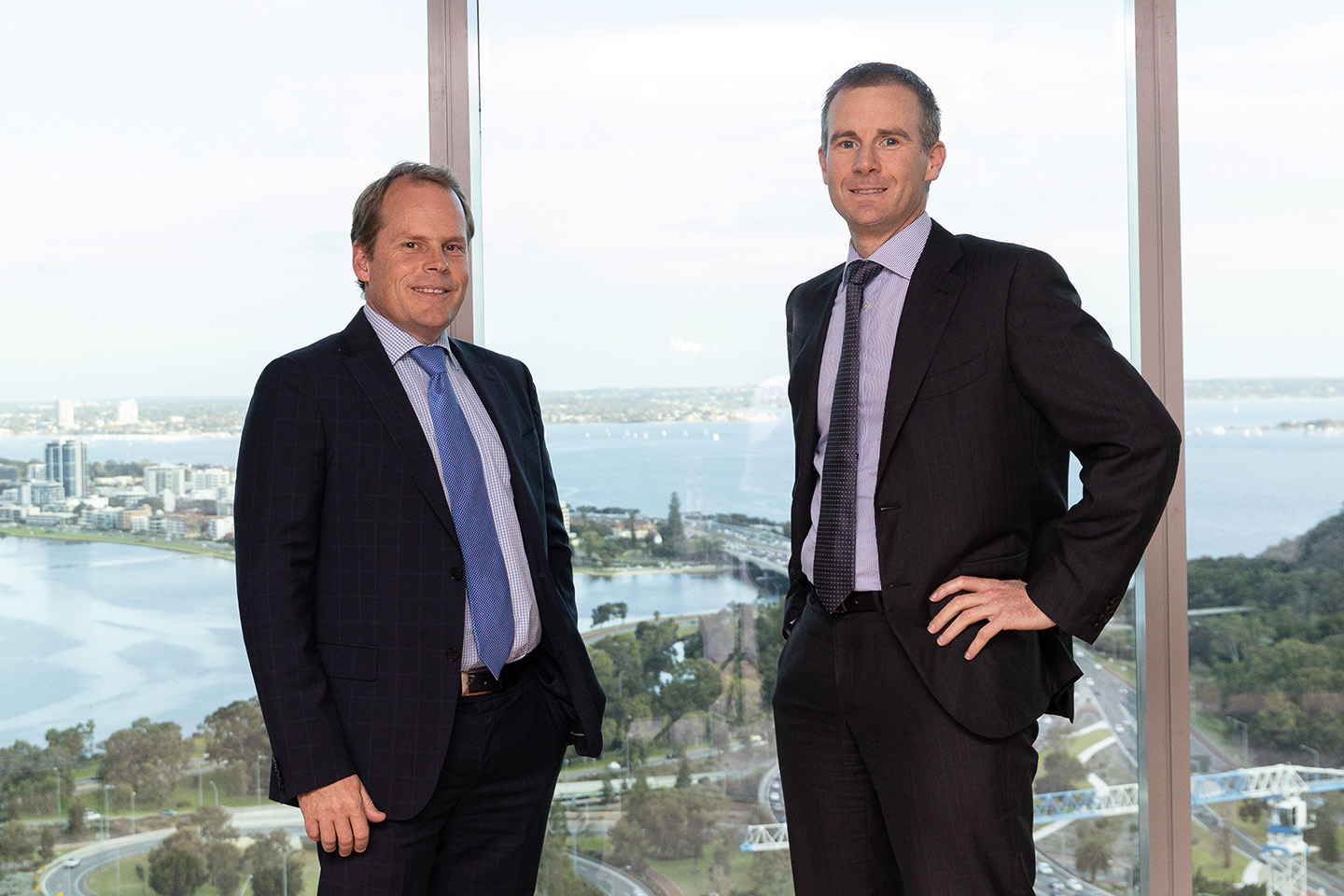 The strong market has been well timed for Canaccord Genuity, which in October last year completed its $25 million purchase of Patersons Securities.

Melbourne-based Mr Freeman said he was pleased with progress so far and planned further growth.

“We had high expectations and they have been met if not exceeded,” he told Business News.

“We had an instant rapport with Michael and Jane and that’s been the backbone of the success we’ve had since completion in October,” he said.

Mr Freeman said one of Canaccord’s key objectives was to materially increase its private client footprint.

It now has 105 private client advisers, including 55 in WA, and about half the firm’s employees are in WA.

The acquisition made Canaccord the largest broking firm in Perth.

That ranking will change shortly, assuming Euroz (with 37 clients advisers) and Hartleys (with 44 advisers) complete their announced merger.

“We’ve retained about 10 people in corporate finance in Perth,” he said.

He explained that Canaccord had about 30 people in corporate finance, across its Melbourne, Sydney and Perth offices.

Coverage of established mid-cap miners, including in WA, was mostly handled by Canaccord’s Sydney office.

This was reflected in the substantial inroads Canaccord had already made into WA before the Patersons acquisition.

The Business News database shows a steady increase in the number of WA deals led by Canaccord, from three in 2015 to 17 in 2018.

“We are going to seriously ramp up our coverage of the junior mining sector in Western Australia,” he said.

“There will be a material uplift in people.”

“On the wealth side, we are absolutely looking to grow our franchise,” he said.

“The acquisition of Patersons wasn’t the end, it was a significant step to create a substantial platform from which we can grow.”

Mr Manford, who is chairman of Canaccord Genuity Financial, said the combined group worked well because it brought together the capital markets strength and global distribution network of Canaccord with the wealth management and capital markets operations from Patersons.

“This combination worked well for Canaccord and was aligned to the operating model of Canaccord globally,” he said.

WA accounts for about 40 per cent of the national wealth management operation.

The firm’s deal flow is already looking positive for the second half of the year, after being named as lead manager for DUG Technology’s $26 million IPO.

Mr Manford said one of the strengths of the wealth management operation was its access to a wider range of investment opportunities, including in technology and e-commerce.

For instance, Canaccord recently had a lead role on raisings for Kogan.com, Temple & Webster and BetMakers Technology Group. 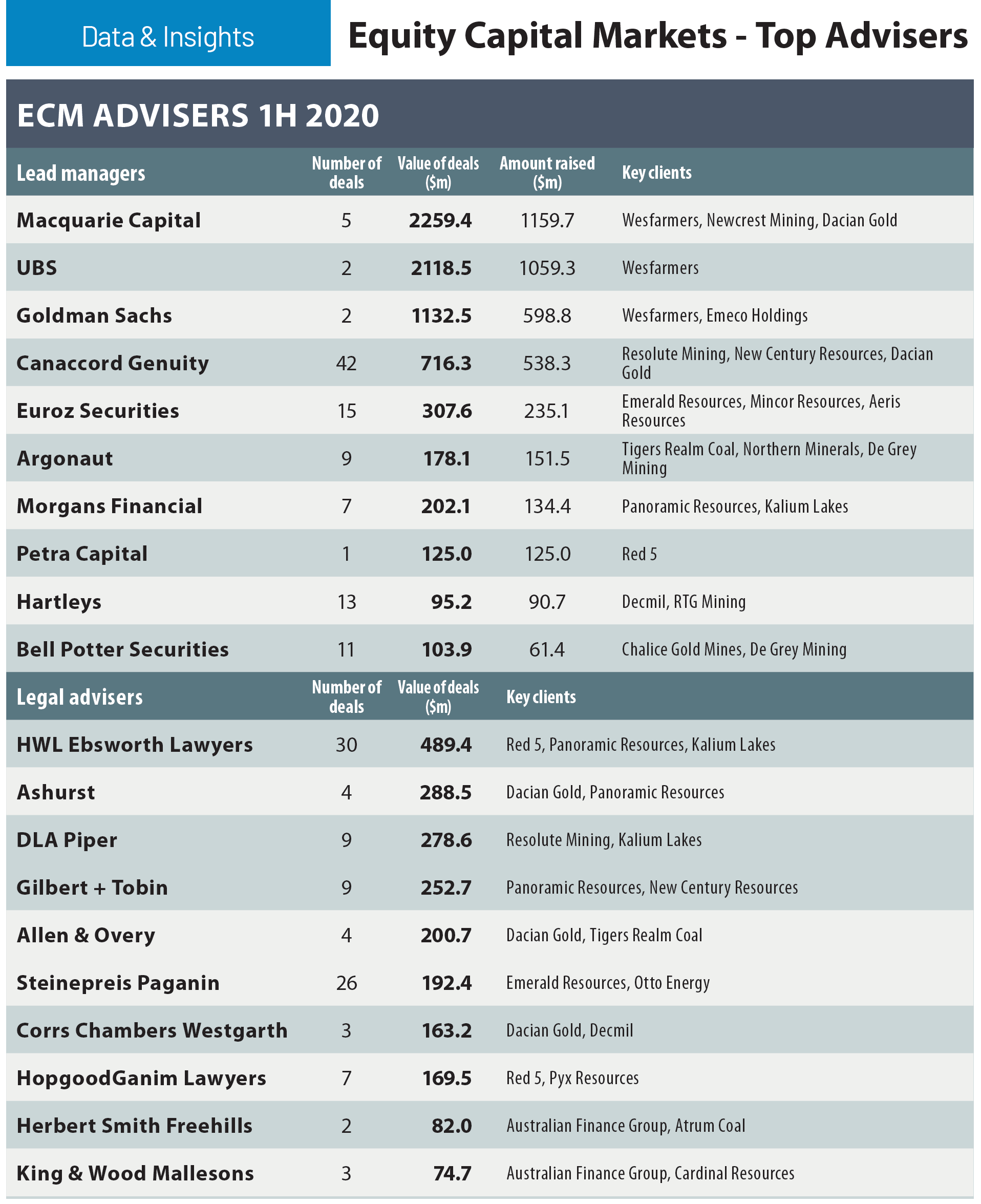 The details of the Patersons acquisition were disclosed in the 2020 annual report of Canadian parent company Canaccord Genuity Group Inc, released last month.

The notes to the financial statements reveal the purchase price of $25 million – equivalent to $C22.6 million – consisted of 10 different components.

The purchase price also included $C6.5 million of identifiable intangible assets, such as customer relationships and the contract book, and $C2.7 million for goodwill, defined as the value of expected synergies arising from the acquisition.

These assets were offset by $C21.5 million of unspecified liabilities.

The buoyant market for WA capital raisings flowed through to the law firms, led by HWL Ebsworth Lawyers.

It topped the league table after advising on 30 capital raisings worth $498 million.

This ranking was unusual for two reasons.

First, it highlighted the lack of big-ticket capital raisings by Perth-based companies; instead there was a large number of small and mid-sized raisings.

Second, it meant that HWL Ebsworth finally moved ahead of arch-rival Steinepreis Paganin, which for many years has been the top legal adviser to small and mid-cap companies.

The league table for mergers and acquisitions looks very different.

The announced deals include a couple of potentially very large transactions that have not yet been completed.

One is Chevron’s plan to sell its one-sixth stake in the North West Shelf venture, which could be worth about $4 billion.

Another is Iluka Resources’ planned demerger of its iron ore royalties, worth an estimated $1.8 billion, into a new ASX-listed company.

The deal flow was also boosted by Perth lawyers advising on some big-ticket transactions outside of WA.

Ms Campion was also lead adviser to Mitsubishi Corporation on its $440 million bid for a stake in the Mantoverde copper mine in Chile.

A&O advised on a total of five M&A deals worth a total of $1.3 billion, pushing it to the top of the league table for legal advisers.

A&O sat ahead of King & Wood Mallesons on the league table.

KWM advised on eight transactions worth a combined $999 million; like A&O, its deal flow was helped by its work for offshore clients.

Cardinal had a big team of advisers on its side, in both Australia and Canada, including Hartleys, HopgoodGanim Lawyers and public relations firm Cannings Purple.

HopgoodGanim, which advised on nine M&A deals worth $624 million, ranked third on the league table. 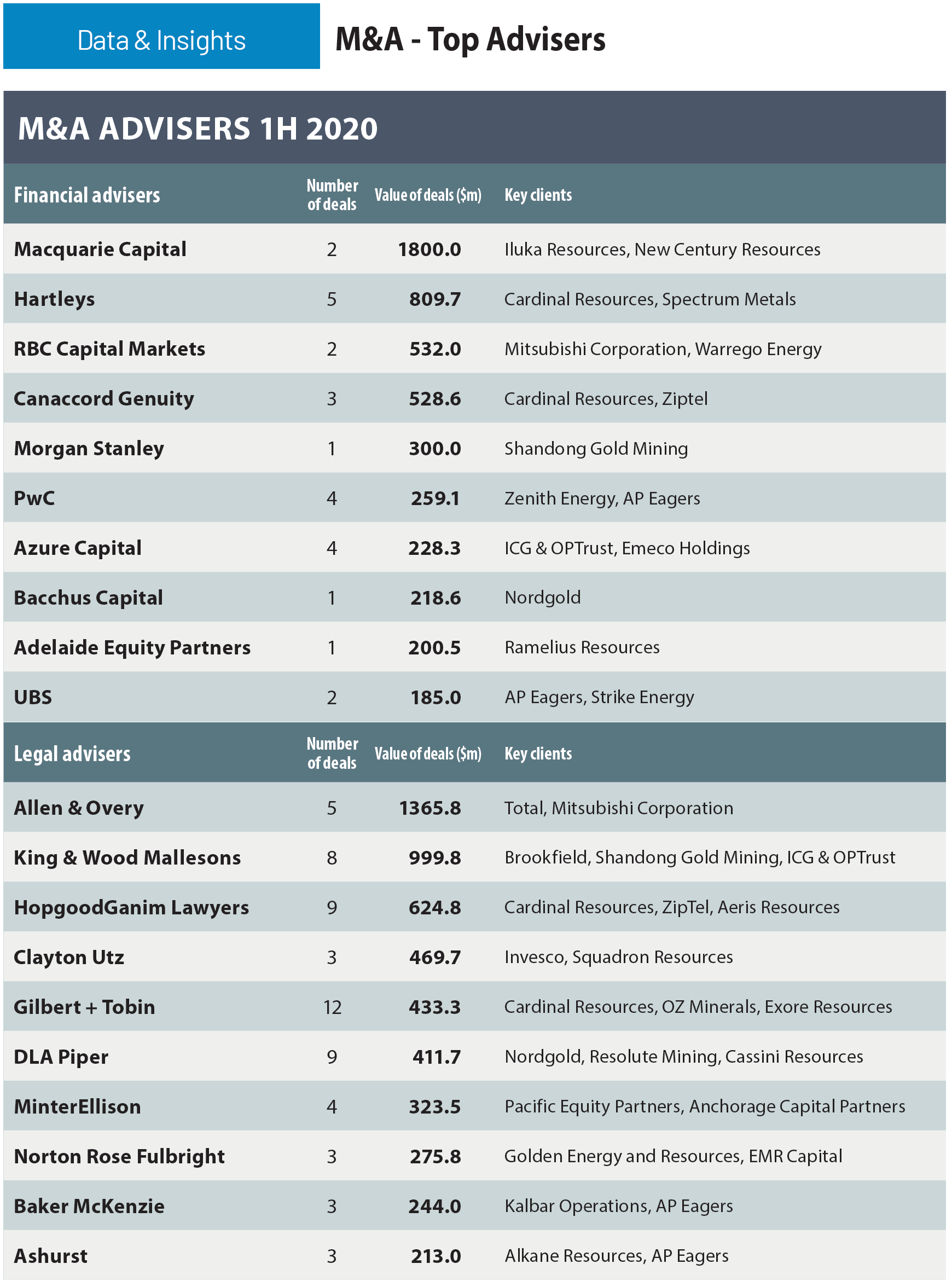 Looking ahead, Macquarie’s Mr Owen said most established mining companies in WA had strong balance sheets, helped by the strong prices for gold and iron ore and the relatively low currency.

“They are in a strong position so they haven’t had to call on investors for capital,” he said.

“As a result, we expect that will be positive for future M&A and we are certainly seeing a lot of interest in strategic M&A.”

Mr Stanning noted that the battery metals sector had suffered this year, after being hit by low commodity prices, but he remained confident it had positive long-term prospects.

“There is no doubt if you ask sector experts where the lithium price will be in two years, the consensus view is that it is going up given the expected increase in EV sales,” he said.

The slump may present buying opportunities.

“It is a logical time for buyers to be looking at lithium and battery minerals given the point in the cycle,” Mr Stanning said.

In M&A, Macquarie’s Perth team has been mandated to jointly advise on the demerger of Iluka Resources’ iron ore royalty into a new ASX-listed company.

This transaction, announced in February, is ongoing.

New Century Resources has a strong history in Perth and several directors are based here.

Macquarie’s metals and mining research team is also Perth based and provides coverage of WA and national mining companies.

Hartleys was the busiest financial adviser on M&A deals, advising on five announced transactions worth a combined $810 million.

As well as advising Cardinal, it advised Ramelius Resources on its $200 million takeover of Spectrum Metals, and also gave advice to takeover targets Exore Resources and Alt Resources.

The second-ranked adviser (by number of deals) was Azure Capital, which counted nickel miner Panoramic Resources, Apex Opportunities Fund and Emeco Holdings among its clients.