Walkable is doable … on Rotto at least

Does Rottnest offer a realistic interpretation of a carless society? 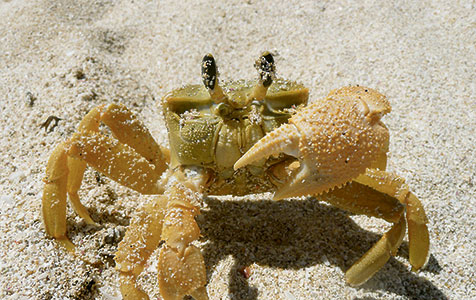 WALKABLE: Rottnest crabs walk everywhere on the island, and we can too.

THIS year, as in those past, I have adjourned from the hurly burly of Perth to reset the clock and do a bit of peaceful reflection at the best place to do that – Rottnest Island.

I always get a bit of editorial mileage from my Rotto experiences. Sometimes it is a bit of spleen venting at a lack of services, other times it is critiquing the true cost of a wind turbine, and there is always the crazy booking system (if I am desperate).

Always, for balance, I have to point out that it is my favoured regular holiday destination.

This year, as I watched the confluence of industry (shipping, including barges laden for Gorgon) and nature (whales breaching) from my beachside balcony at Longreach Bay, I also took time to finish a book that I mentioned recently in a previous column – Walkable City by Jeff Speck, who is in Perth on a speaking tour next week.

My timing couldn’t have been better – reading a book that highlights the value of a reduced reliance on motor vehicles while staying on an island that forbids private cars. Obviously it is easy to make the ideals of Mr Speck’s book function in such a place – a few thousand people in close proximity with nothing better to do than walk, ride bikes or telecommute (for those who really do have to work and have mobile phone carriers that offer realistic coverage over there).

Nevertheless I took some great lessons on board, even if Rottnest is a long way away from the typical suburb in Perth, or anywhere else in Western Australia for that matter.

For instance, in recent times the area in front of the original shops at the main settlement has been reserved as a kind of pedestrian mall, with bike riders asked to dismount to traverse this area. Such a request is as unbelievable on an island dominated by bikes as it would be to stop cars driving through the main street of any traditional retail area, like Subiaco for instance.

And it never really worked. While it is understandable that someone thought it was risky to have bikes racing through a busy area while people shopped, congregated to eat and generally just hung around, it was also clearly a major obstacle to those riding through the settlement along the main thoroughfare.

So I was glad to see that this unenforceable ban had been lifted. Instead, some traffic calming had been installed to replace ineffective barriers. People now rode or walked together in, from what I could see, a safe manner. Cyclists and pedestrians were now equally responsible for avoiding collision.

The value of co-mingling is one of the most interesting points that I have taken from Mr Speck’s book. He says his efforts to make cities more walkable, and rideable, are not about banning cars. He wants each to have a piece of the action, rather than the situation we have now where cars tend to dominate.

Mr Speck’s concern about this kind of specialty is not just limited to motor vehicles. He is also concerned about cyclists’ demands for infrastructure, which can be so bike-friendly as to restrict pedestrians and cars.

Flexibility is the key, so choices can be made.

And that is what making a more liveable city is all about – individual choices.

A lot of the things Walkable City suggests have taken place in Perth in recent years. There has been much traffic calming, changes to street parking settings, rearrangements to pedestrian crossings, the return of two-way traffic to inner-city roads, general street beautification, and more points of interest within walking distance (outside the CBD, I’d suggest small bars are a big change in this respect).

The impending closure of Riverside Drive to allow the creation of Elizabeth Quay is right out of the Walkable City playbook.

I have raised concerns about the congestion that some of these changes have created, so I am not exactly on the walking bandwagon. But, as I have also previously highlighted, many of these changes in the CBD have come at a time of huge increases in the traffic burden (and public transport) due to a big rise in population.

While slowing traffic in the city might seem like the problem, it is most likely a coincidence of timing that has partly masked the increase in the number of cars on the road, as the work-day populations of the CBD, and Perth as a whole, have grown.

I drive regularly through the city at all times of the day, and traffic flow is definitely slower. But I am getting used to that and planning ahead, or choosing alternatives.

The truth is that more roads don't solve congestion in the long term, and you don’t have to read Walkable City to know this. Perth has grown to a point where it is congested and no realistic changes to road systems will change that.