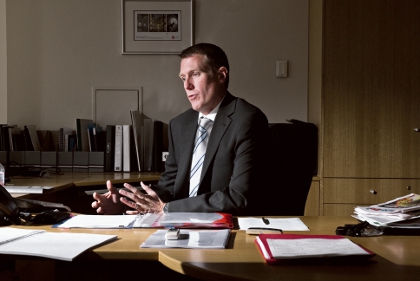 Western Australia’s share of GST grants will fall to a record low next year, with the state due to get back just 55 per cent of all GST collected here.

State treasurer Christian Porter said the reduction, from the already low level of 72 per cent in 2011-12, would result in a $598 million fall in WA’s share of GST grants.

“As a result of the proposed cuts, WA Treasury preliminary modelling is now predicting the WA share of GST grants will fall to as low as 27 per cent in 2015-16,” he said.

“The impact of the mining boom on Western Australia’s revenue raising capacity and the fiscal burden of natural disasters on Queensland largely account for the main changes in shares of the GST recommended for 2012-13,” he said in a statement.

“The growth in mining royalty revenue, as well as the impact of employment and wages growth on payroll tax revenue have boosted Western Australia’s fiscal capacity to an exceptional level.

“The associated reduction in Western Australia’s share of the GST has been allocated to other States and Territories, giving them all the same capacity to deliver services and thereby gain some of the benefits of the mining boom.”

“Similarly, the burden of natural disasters is shared across jurisdictions through the allocation of the GST.”

Mr Porter said that contrary to some prior media reporting, only a small fraction of the proposed cut would help compensate Queensland for the financial impact of recent floods.

“Nearly all of this cut is plain and simple a penalty for WA’s ongoing economic success and it will severely constrain the State Government’s ability to continue investing in the infrastructure and services needed to grow WA’s resource sector, which is propping up the national economy,” he said.

“The State Government has long predicted our GST share would fall to about 60 per cent in 2012-13.  The Federal Government continually denied this would happen and have been proven very wrong with today’s cut being even worse than WA forecast.

The new “relativities” mean that WA will get 5.8 per cent of all GST collections in 2012-13, down from 7.5 per cent in the current financial year. By comparison, WA has just over 10 per cent of the national population.

“Compared to our full population share of the GST, a 55 per cent share will cost WA about $2.4 billion each year - and this is only the tip of the redistribution iceberg,” Mr Porter said.

“Each year, the federal government takes about $14 billion more in revenue out of WA than it puts back into the State.”

The Barnett government has argued there should be a 75 per cent floor in the state’s share of GST grants.

This proposal, and others, is currently being assessed as part of a review chaired by former NSW premier Nick Greiner.

"It makes no sense to penalise the areas of the economy that are performing well and propping up the Australian economy," Mr Pearson said.

"The mining sector is a high cost industry with massive infrastructure spending needs. There is no recognition of this, while other states’ gambling revenue isn’t included in the formula."

The Grants Commission said the 2012-13 relativities are based on the average fiscal capacities of each State and Territory over the three years 2008-09 to 2010-11.

“As required by the terms of reference, the assessment is based on the same methodology applied each year since 2010, but using updated and more recent data,” it said.

The Commission said the recommended allocation of GST revenue is designed to equalise the fiscal capacities of the States; that is, to enable the States to provide a similar standard of services provided they make a similar effort to raise revenue.

The recommended relativities for each state and territory are as follows: