WASO tunes up for Karijini opera

A string quartet from the West Australian Symphony Orchestra will exchange its Perth Concert Hall home for a natural stage in the Kalamina Gorge next week for the 2017 Karijini Experience. 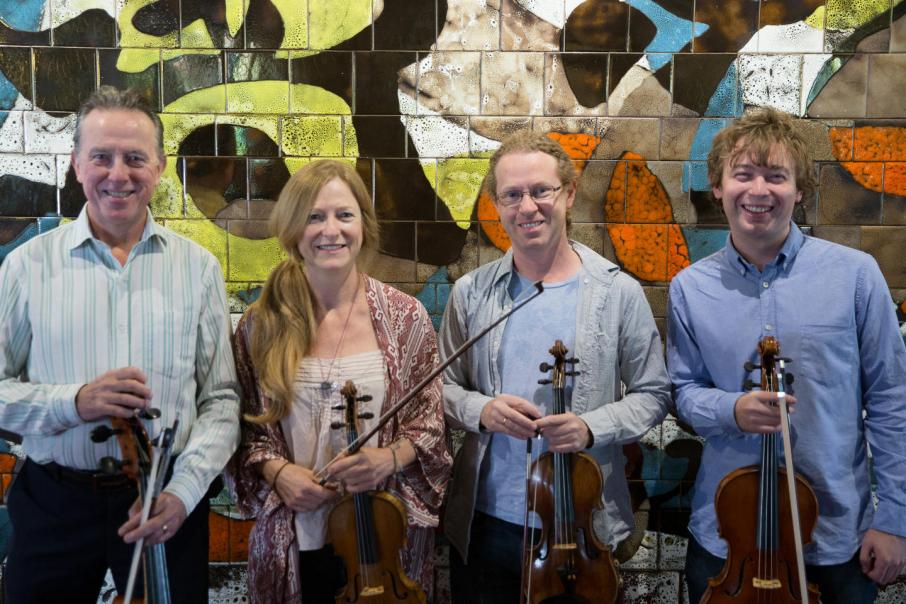 Rod McGrath (left), Ellie Lawrence, Zak Rowntree and Ben Caddy will travel to Karijini next week to play in the open within the Kalamina Gorge. Photo: Luke Anderson

A string quartet from the West Australian Symphony Orchestra will exchange its Perth Concert Hall home for a natural stage in the Kalamina Gorge next week for the 2017 Karijini Experience.

‘Opera in the Gorge’ is just one of more than 30 events that will feature as part of this year’s Karijini Experience, with four of the WA Symphony Orchestra’s musicians to play alongside the Indigenous Wirlarra Ensemble.

The annual event is run by not-for-profit community organisation Nintirri.

Chief executive James Jarvis said the Karijini Experience, first held in 2013, brought together locals and tourists to enjoy a fusion of art and culture across a range of activities.

“The purpose of the Karijini Experience is to develop and deliver an uplifting authentic celebration that offers the opportunity for people to come together and be enriched through connecting to the Karijini National Park and its people.”

“When you look at WA’s assets Karijini is this hidden jewel set in the Pilbara, a beautiful environmental asset that has previously been identified as the best kept secret in Australia,” he said.

“We’re utilising the landscape of Karijini National Park as a blank canvas to provide visitors a distinct artistic performance.

“What’s difficult for us is that we’re delivering an arts and culture tourism event in a remote location so we need to provide quality; something they’ve never seen or accessed before.”

Mr Jarvis said he wanted to create elements of cultural fusion and had approached WASO with the opportunity for its string quartet to play alongside a didgeridoo player and indigenous singers.

WASO education coordinator Fiona Taylor said it was the first time the group would visit the Karijini area and that the four musicians had been busy working on compiling a set list from their orchestral repertoire that they thought didgeridoo could blend with.

“Culturally it’s a space that we’ve only just started to work in, so it’s a very special invitation to be asked to come on to country and work in an indigenous space,” Ms Taylor told Business News.

“The other opportunity is just going out and meeting with a whole range of people; it’s an indigenous festival and there’s going to be 18 language groups.”

Ms Taylor said the quartet would perform across various events from Tuesday through to Friday, including various kids’ cushion concert series and during the culinary experience, in addition to Opera in the Gorge.

“There are lots of opportunities to play alongside other musicians and artists,” she said.

“But also to present at the young people’s performance; up there kids don’t often get to see things live.”

As part of the Opera in the Gorge finale, the quartet will play their own set, as well two combined works with the Wirlarra Ensemble – The Hallelujah and Anthony Callea’s The Prayer.

Major partner MACA Limited, which partnered with WASO in 2014, also signed on for a further three years.