The Western Australian Cricket Association (WACA) has announced a $200 million redevelopment that will transition its ground to a 'boutique' venue designed to complement the new Perth Stadium, which will host all Big Bash League and major international matches. 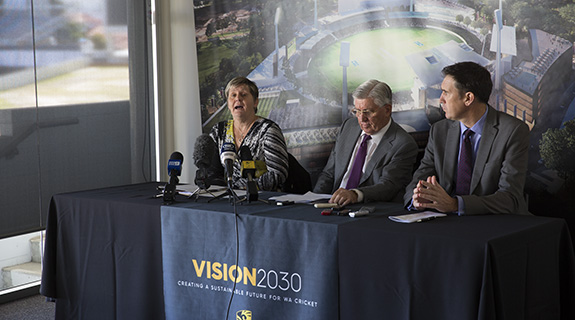 The Western Australian Cricket Association (WACA) has announced a $200 million redevelopment that will transition its ground to a 'boutique' venue designed to complement the new Perth Stadium, which will host all Big Bash League and major international matches.

The WACA Ground's capacity will drop to 15,000 and it will lose all BBL matches, along with one-day and test matches against India, England and South Africa, to Perth Stadium.

The decision was announced at the release of the WACA’s Vision 2030 report, which was created over 14-month period by a board-appointed committee headed by former iiNet chairman Michael Smith.

The blueprint for the WACA redevelopment involves new stands and more shade for spectators, new dedicated player facilities and training facilities, and a new administration block.

There is also scope for a possible future collaboration with the Western Australian Football Commission to allow WAFL games and finals to be played at the WACA during the winter.

WACA chief executive Christina Matthews said the discussions were at an early stage and no agreement had yet been made.

“We see it as a natural fit ... it would be a real boost for football in this state to be able to play games under lights within the city and the East Perth sporting precinct,” she said.

“We’re waiting for the commission to come back to us and be ready to start further negotiations.”

It’s believed the government is also looking to get in other sports at the WACA for bigger events.

To fund the redevelopment, the WACA will be seeking commitments by the state and federal governments, Cricket Australia and Lotterywest, and is considering selling off a number of land assets it holds, which are valued at about $26 million.

WACA chairman Sam Gannon said that, in the board’s deliberations, to do nothing was not an option.

“The ground is deteriorating and it’s there for everybody to see,” he said.

“The WACA and Cricket Australia have agreed to schedule content to the new stadium, including the Big Bash League and home finals, one day internationals, tier one and tier two games (England, India and South Africa games),” Mr Gannon said.

Tier one and two test matches will also be scheduled at the new Perth Stadium.

“Research tells us that there’s a reasonable expectation that the future attendances at these games will be greater than the capacity of the WACA ground,” Mr Gannon said.

He also said that after the ground was redeveloped, the venue would provide permanent capacity of up to 15,000 people - that’s at least 5,000 less than the ground’s current capacity.

“This is based on the expectation that those games would expect to receive less than 10,000-15,000 attendees.”

Ms Matthews said members of the WACA would have access to both venues without any additional costs, and would be exposed to more games more frequently.

The members seating area at Perth Stadium will be located on the northern side of the ground, behind the wicket.

“It will provide cricket with world-class facilities for patrons and players and further strengthen our position as Australia’s favourite sport,” he said.

“The popularity of cricket has never been greater in this state with different forms of the game capturing different demographics and markets.

“Having two world-class cricket grounds will be a tremendous boost for Australian and Western Australian cricket.”

The first game of cricket to be played at Perth Stadium will be in 2018-19.