The Western Australian Cricket Association has secured $34 million in funding commitments to advance plans to upgrade its grounds, as well as develop a museum and community aquatic centre. 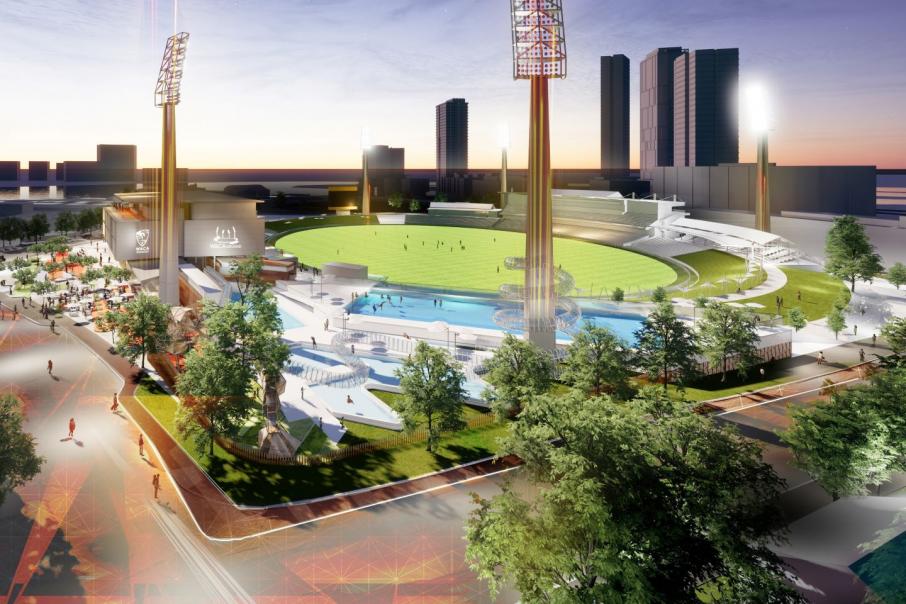 In additional to upgrading cricket facilities, the WACA redevelopment also proposes the including of an aquatic facility. Image: WACA

The Western Australian Cricket Association has secured $34 million in funding commitments to advance plans to upgrade its grounds, as well as develop a museum and community aquatic centre.

The WACA announced this morning that it had received $30 million from the state and federal government as well as $4 million from Cricket Australia, enabling it to progress the planning phase of its WACA Ground Improvement Project.

The WACA has unveiled a final schematic design with upgrades to cricket facilities including a 10-lane indoor cricket and multi-sports centre, high-performance gym for the state cricket programs, as well as home and match-day changerooms and recovery facilities.

Plans include removing the Inverarity and Prindiville stands to make way for one central pavilion on the northern end of the ground, which will integrate a number of community amenities open to the public all year-round.

The redevelopment also proposes the creation of a WACA Ground museum, community health club, sports medicine and rehabilitation centre, all-abilities playground and a sensory room for the public.

Other features include a lengthened oval to accommodate Australian Rules Football and other sports, as well as an aquatic facility comprising a 50 metre pool and water leisure slides.

“After extensive consultation and planning we can finally see our vision for the much-loved sporting Ground come to life, and we’re thrilled to be able to share the designs that illustrate the key community amenities and offerings at the venue,” WACA chief executive Christina Matthews said.

“We’re making great progress in the planning phase of the project and with the support of the City of Perth and state and federal governments, we look forward to reaching the next milestone in transforming this iconic ground into a community destination with cricket at its heart.”

The WACA anticipates early works to commence prior to the 2021-22 cricket season, with expected completion targeting early 2024.

The Project Working Group and Steering Committee, established by the WACA to oversee the redevelopment, will continue to lead the project as it enters stage three, which involves detailed design and procurement.

The project, including the inclusion of a community aquatic centre, is part of a $1.5 billion Perth City Deal signed by the federal and state governments and the City of Perth.

“The design presents exciting opportunities for both the community and delivery of our high-performance program, and we look forward to sharing these in more detail once the next stage of the project is complete,” he said.

Minister for Sport and Recreation Tony Buti said the city would benefit from the versatility of the facility that could be used for community events, sporting fixtures and improving the general wellbeing of local residents.

“Not only will the WACA Ground continue to be a destination for cricket and other sports, but as a facility for the wider community that can be enjoyed year-round,” Dr Buti said.

City of Perth on the fence

Today City of Perth Lord Mayor Basil Zempilas reaffirmed his comments from a council meeting last month that the city would welcome an aquatic facility at the WACA grounds, but needed a business plan before the city made any financial commitment.

Speaking at a press conference earlier today, Mr Zempilas said the city would not be rushed into a $32 million capital outlay.

“That is in anybody’s language, a very significant commitment.

“I won’t have anyone rush me on a decision that puts the City of Perth to expenditure of around $86 million.”

Mr Zempilas said the latest design would form the basis of a business plan, with a council meeting on Tuesday to discuss the next steps.

“I understand that city councils are required and expected to provide amenity to their ratepayers and residents and if this deal stacks up it will give me and my council great pleasure to be able to say we’re in,” he said.

“A swimming pool within the City of Perth would be absolutely brilliant but the deal has to stack up and must pass all of the tests and in fact it is a requirement of the Local Government Act that for expenditure and a decision of this magnitude a busines plan must be done.

“I think like anybody building a house or anybody spending their hard-earned money, they want to get the best value.”