The heads of Western Australians universities have publicly warned the proposed legislative changes to higher education could reduce the level of public good universities provide and threaten more expensive fields of study such as medicine and science. 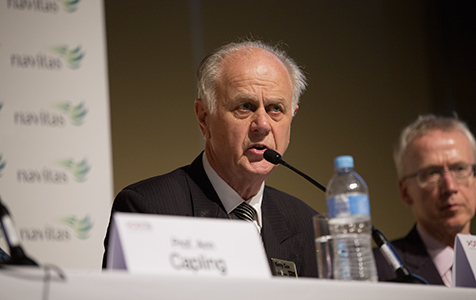 ECU vice-chancellor Kerry Cox is not resigned to the proposed legislative changes being passed in their current form. Photo: Attila Csaszar.

The heads of Western Australians universities have publicly warned the proposed legislative changes to higher education could reduce the level of public good universities provide and threaten more expensive fields of study such as medicine and science.

In a Committee for Economic Development of Australia event held in Perth today, university representatives also warned the proposed changes could further degrade the state’s poor participation in the higher education sector.

University of Western Australia vice chancellor Paul Johnson said that changes to the sector needed to be carefully managed and not made into a political plaything.

Mr Johnson said while the Senate had a propensity for extended debate on higher education changes, many politicians were out of touch, mostly drawing on their own out of date experiences.

“It’s a bit like people who last shopped at Bunnings 30 years ago thinking that they are better positioned to run Wesfarmers than the current Wesfarmers executives,” Professor Johnson said.

He encouraged them to visit universities in their electorates to hear how changes could be implemented in a careful and positive manner.

Curtin University vice chancellor Deborah Terry said while Curtin welcomed the opportunities of the changes including greater competition which could motivate more innovation, she said planning for adequate financial assistance was necessary to ensure students could pursue study regardless of socioeconomic status.

“If we (implement policy) in an unthinking manner we will get market failure, we will find that there are some areas that are no longer offered in Australian universities,” Professor Terry said.

“Some important areas of study, we will see market failure, we will see some campuses closing in regional areas.”

Edith Cowan University vice chancellor Kerry Cox said less than 50 per cent of Western Australians had degree qualifications suggested there was a culture of not valuing higher education.

He said he was not convinced the proposed changes including reducing government funding by 20 per cent would pass, but said they were not good for students.

“If it does get through there’ll be very big disincentives for people to pursue higher education especially because of the debt burden,” Professor Cox said.

“It’s very disappointing that higher education has becomes so politicised.

“In the knowledge economy we need to mobilise as many thinking Australians as we can...have them swim comfortably in the ocean of knowledge, but we’re not doing that.

Professors Cox and Johnson both highlighted the point of universities was to deliver a public good.

“We have to imagine that there can be a better society and then we educate our students and we support our researchers to turn those ambitions into reality,” Professor Johnson said.

“It’s those sorts of activities, which I believe are of fundamental importance, those will come under threat...if the government allows non university higher education providers to enter the sector on the same basis as existing universities but without any expectation that they too provide a public benefit,” Professor Johnson said.

“Each one of our universities devotes a much larger proportion both of our revenue and of any surplus generated to public benefit than does any company.

“So there is a real risk that even if there’s competition the government could destroy many of the good things about the Australian university system if it introduces competition in an unthinking way.”

“There are some highly profitable areas of our internal operations that cross subsidize less profitable ones,” Professor Capling said.

“We could perhaps be in for an extremely difficult time.”

University of Notre Dame Australia pro vice chancellor Selma Alliex said while she was also concerned about managing challenges, the private university welcomed the changes that would allow a move from essentially half its students receiving Commonwealth support to almost all.