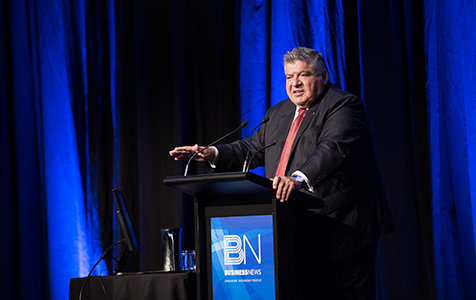 Western Australia's economy remains the envy of most of the Western world, despite sustained falls in consumer and business confidence, according to the founder of Australia's biggest mortgage broking brand, John Symond.

The Aussie Home Loans entrepreneur told a Business News Success & Leadership function this morning he believed WA's economic fundamentals, particularly its endowment of natural resources, had the state well poised to return to its mantle of Australia's industrial and economic powerhouse.

Mr Symond said much of the pessimism and negativity in regards to the WA economy stemmed from the slowdown of economic growth in China, but he urged consumers and business owners alike to take a longer term view.

"There's not too many places in the world that have got what WA has got," Mr Symond said.

"This is just a slowdown and particularly with China, the policy is government driven.

"Our economy goes on supply and demand, as does most of the West.

"In China, this is government policy, they need to slow down.

"You know the foot is going to go back on the accelerator, but we don't know whether it's next month, next year or in five years."

While Mr Symond acknowledged the pain being experienced in WA's resources sector, particularly in the iron ore sector due to the falling value of the commodity, he said many established economies worldwide would swap their position with WA if given the opportunity.

"Yes you will get a lot of mining companies in strife with the price of iron ore where it's at, but in terms of the next 10 years, particularly the next five to 10 years, my money is WA will get back there to be the big turbocharged sector of Australia, because globally everyone wants what we've got here," he said.

Instead of dwelling on the negative effects of China's slowing growth and the subsequent pessimism surrounding it, Mr Symond said savvy business owners should use times of economic uncertainty to grow their business.

"You've always got to invest in the future," Mr Symond said.

"I'm someone who won't wait ... for everyone else to get on the starting line.

"The worst and hardest time to grow your business and get the right people for your team is when everything is going gangbusters.

"The best time is when there is uncertainty

"Businesses take a breather, some of them put on their tin helmets and jump into their bunks and cover themselves and wait for the storm to go, but that's when the opportunities hit."

For more coverage, look out for Monday's print edition of Business News.